Voices from Survivors of Hiroshima & Nagasaki: "I had dreamt the night before exactly as it happened in Nagasaki." 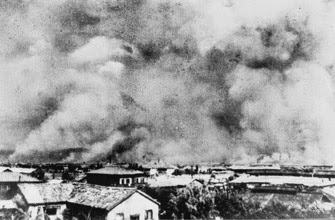 Voices From Survivors of Hiroshima and Nagasaki (linked at the Gensuikyo (The Japan council against Atomic and Hydrogen Bombs site) is a profound collection of survivor testimonies describing the hours before, during, and after the atomic bombings.

The lists of titles of the testimonies read like lines of poetry, painting the terrible tapestry of individual human experiences as Hiroshima and Nagasaki passed through the chasm dividing reality before and after the bombings:

Witnesses to Hiroshima from the night of August 5 through the early afternoon of August 6, 1945

I left the place and escaped death.
It was 15 minutes after 8. It was as silent as a graveyard.
Rays shimmered like heat haze on the ground..
I thought Hiroshima was moaning...
I thought I was dead.
The water of the river blown off the ground just like a tornado.
Leaves were burning on the pine trees.
It seemed as if the sun covered half of the sky over Hiroshima.
Na-mu-a-mi-da-butsu, they chanted in their Buddhist prayers...

Witnesses to Hiroshima around noon through the evening, August 6, 1945

The dead sat up abruptly.
The burning bridge fell down.
Flames shot up into the sky like the Niagara Falls inverted.
Angels.
Now is the time to throw away our pens...
Everybody cried out loud.
My little brother died. I should not have yelled at him.
Maybe it was my mother's soul that visited me.

Witnesses to Hiroshima from August 7 through August 14, 1945


Daybreak, August 7th, 1945 Hiroshima
We dug the riverbank and buried her two daughters
The enemy used a new type of bomb
I was more afraid of the Living than the Dead.
Would this case possibly be caused by radioactivity? 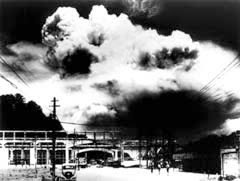 
The farewell meal was rice balls.
I had dreamt the night before exactly as it happened in Nagasaki.
I still cannot forget my seven-year-old-son's back.
Three B-29s are heading toward the west.
My shoes were burning
The cloud like a demon was looking down.
People were dead with their eyes open
Cicadas shrieked, "Water, water!"
Don't cry, she was lulling her baby.  The baby was headless.
Even my soul was blown off.
Nagasaki will never recover.
The sun looked bloody red.
Your face looks like a monster.
This must be the end of the world.
It was dreadful to hear the groaning of thousands of people.
I said the prayer of Job.
I have forgotten the prayer.
I walked home crying for Nagasaki on fire.

Hiroshima and Nagasaki August 15, 16 in August to The first ten days of September, 1945

War made us suffer so much.  It didn't matter whether we won or lost.
Radiation injury was the great majority.
Medical science had no chance against it.
I'd like to go where Saint Mary is, with my hair tied in three-pieces.
Pious and calm struggle against disease.
I have been to the "next world."
My younger brother appeared in my dream and told me the place he died.
"If we could die wet with rain, we were willing to do so."
I have to expose my fox-like face to the public and live.
I'm happy.  Buddha has come to meet me to Heaven.
Evening primroses had been in bloom over a burial mound where we buried the dead people.

Opposing to atomic bombs are the voices of A-bomb victims themselves.
We really went to stupid war.
I would want to be pilgrim and go to look for my daughter.
We have to revenge by achievement of peace...
A-bomb survivors must not escape from the fact of being bombed.
Parents, children and grandchildren -- three generations continue to carry on movement against atomic and hydrogen bombs.
Please make use of my story. 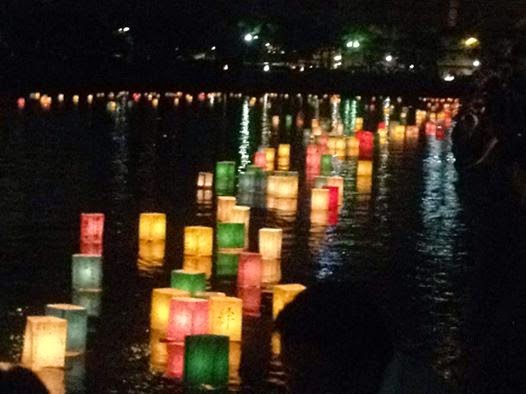