The volcanic island chain connecting Hokkaido with Kamchatka received their name from the Ainu, the islands' original inhabitants. "Kur" means "man" in Ainu. The latest manifestation of the 20th-century dispute between Japan and Russia over the Kuriles continues to obscure prior historical Ainu ownership of these tiny islands.

Tokyo's claim makes no sense within a contemporary indigenous rights framework that posits indigenous peoples as equals within a community of nations (not to mention historical rectification for historical wrongdoing against them). However, the Japanese claim may have made some sense in the past within an outdated "Age of Imperialism" territorial framework based on the idea of privilege over indigenous peoples and their lands—given proximity of the Kuriles to Japan. (Historian Leo Ching writes that Japanese colonialism needs to be viewed historically and spatially within the larger context of global colonialism by which European nations had seized 85% of the world's land mass by the turn of the 20th century).

In contrast, Russia's claim to the Kuriles is much more of a stretch, even within an imperialistic paradigm. How did Russia (ostensibly a European nation) come to control an empire over the vast breadth of Siberian Asia (first inhabited by indigenous peoples with rich cultures much older than Moscow's) beyond the Pacific to the Kuriles—even farther off the Asian mainland than Sakhalin)?

Revenge and a sense of divine mission (Russia's version of "Manifest Destiny") fueled its adventurers' and soldiers' violent predatory march across Asia, writes Scott Malcolmson in his 1994 history/travelogue, Borderlands: Nation and Empire:


The question of what Russians are doing in Asia has preoccupied Russians more or less since the birth of Russia itself...The traditional date for the founding of "Russia" is 862. By 882, Oleg had established a strong state with its capital at Kiev...

Kievan Russia broke up into principalities in 1054 and was destroyed in 1237 to 1240 by Mongols and Tatars. The latter proceeded to dominate the Russians until 1840...Russians know the 1240 to 1480 period as the "Tatar (or Mongol) yoke," and appear never to have forgiven Asians for humiliating them.

They also appear to have developed a strong sense of mission. Under Ivan III's successor, Basil III, some Russians came to imagine themselves as the army of God and Moscow as the Third Rome...Basil's successor, Ivan the Terrible, began Russia's conquest of Siberia, and Russians continued expanding their territory into Asia until Gorbachev withdrew Soviet troops from Afghanistan. That makes nearly five hundred years of steady imperialism...

Anna Reid provides an economic explanation for Russia's claim in her luminous history of the indigenous peoples of Siberia, The Shaman's Coat, in which she cites the fur trade (seal and sea otter in the Kuriles) as fueling Russia's march through Asia:


What drew them on, swiftly and surely as gold drew the conquistadores to Peru, was fur, especially that of the ferret-like sable. Blacker than night, softer than a snowfall, sable pelts had been the ultimate status symbol since history began...

In the 1500's European demand for fur expanded, thanks to the influx of New World buillion and rise of a showy new merchant class. Chief supplier to the growing market was Russia, whose European forests were soon hunted out...

There duly appeared in Siberia a hereogeneous breed of trapper-fighter-explorers, not unlike the French woodrunners who first penetrated Canada. In theory, they divided into two categories: commercial operators, self-financed or under hire to merchants, and 'servitors' — mostly the unruly soldiers known as Cossacks — in salaried government service. In practice, they behaved so similarly and worked together so often as to be virtually indistinguishable, giving rise to a continuing debate over whether Siberia's conquest was primarily the result of conscious government policy or of haphazard private enterprise. Both groups went armed...

Like their Canadian equivalents, they travelled as far as possible by river, dragging their boats from headwater to headwater and building wooden forts...at strategic confluences...From these they set off on fur-gathering expeditions, in the rouse of which they both trapped themselves and extracted pelts, by violence or by barter, from nearby native settlements. Seduced or subjugated, each tribe's duty regularly to produce furs in the future was made official by the imposition of an oath upon its leader...

Haphazard as it was, the conquest of Siberia transformed Muscovy, helping turn it from an obscure princedom on civilisation's fringes into a great European power. Until the end of the seventeenth century, one historian estimates, the fur trade contributed more to the country's economy than any other single activity save agriculture...In 1595 Boris Dogunov was embarassed by a request from the Holy Roman Emperor, Rudolf II, for military assistance from the Turks. Not wishing to jeopardise trade with Constantinople, he compromised by sending Rudolf the pelts of 337,235 squirrel, 40,360 sable, 20,760 marten, 3,000 beaver and 1,000 wolves...

In the meantime, Siberian furs had not only lured Russia into Asia, but helped poltically consolidate the Russia state... 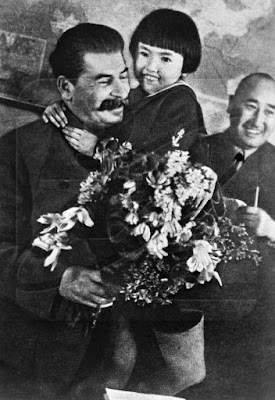 (Stalin with the daughter of a Buryat Party chief. Two years after this once-popular propaganda photograph was taken, her father was shot and her mother sent to a labour camp. Image: Yury Artamonov's Photo Archive

In Siberia the Russians had won themselves a continent, a land on which the sun never set, one of the biggest empires the world had even known... The indigenous people overcome by Moscow included the Khant; the Buryat (the largest indigenous group in Siberia, practitioners of shamanism and Tibetan-inspired Buddhism from the 1700's); the Tuvans (known for throat-singing and shamanism); the Sakha (Russia subjugated Sakha into forced labor long before sending political prisoners to Siberia. Stalin established Gulag forced labor camps on their land where many thousands of Sakha disappeared along with ethnic Russians); the Chukchi (their land was also a site of the Soviet Gulag. Traditionally a nomadic reindeer herders, Chukchi who resisted collectivization were sent to forced labor in mining and logging camps. Between 2-3 million Chukchi died from forced labor); the Ainu; and the Nivkh (banning the Nivkh language and culture, Soviet Russia showcased the Nivkh as a 'model' for a culture that transformed from the Neolithic age to a socialist industrial model).

From 1945-1948, Moscow forcibly deported many Nivkh, Ainu, along with half of the Sakhalin Oroks, and most Japanese to Hokkaido. Since January 2005, the descendants of the remaining Nivkh, and the Uilta, another indigenous people of Sakhalin have engaged in nonviolent protest, demanding an independent ethnological assessment of Shell's and Exxon's oil exploration off the coast of Sakhalin. 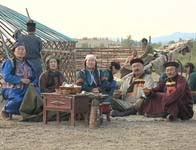 (Contemporary Buryat. Image: "A Pearl in the Forest - the movie")

The Independent reported on the Ainu claim to the Kuriles during the 1992 eruption of the Russian-Japanese dispute in "Ainu people lay ancient claim to Kurile Islands: The hunters and fishers who lost their land to the Russians and Japanese are gaining the confidence to demand their rights:"


Mr. Akibe is from the Ainu people, an ethnic minority who live mostly on Hokkaido and who have been fighting discrimination by the Tokyo government for years. 'The Kuriles are not Russian, and they are not Japanese either,' said Mr Akibe, who was wearing traditional Ainu robes and an embroidered headband. 'We were the first inhabitants of these islands, and lived there before this territorial problem even appeared.' Some Russians laughed nervously while Japanese listeners studied their shoe-laces.

Mr. Akibe produced a map of the Russian Far East, the Kurile Islands and northern Japan, showing the extent of Ainu settlements throughout the region up to the beginning of this century. Fishers and hunters, the Ainu had occupied the Kuriles for centuries before the Russians and the Japanese discovered them in the 19th century. 'You (Russians and Japanese) should both remember the historical rights of the Ainu when you conduct your negotiations,' he said.

In 2005, Ainu representatives again objected to Russian and Japanese claims of ownership:


Representatives of the Ainu nation, an indigenous group in northern Japan, issued a joint statement on November 14 to the Japanese Foreign Ministry and the Russian Embassy in Tokyo claiming territorial rights to the South Kurile Islands and demanding that Japan and Russia cease talks of governmental ownership....

The Ainu explained in their statement that "the four Kurile Islands belong neither to Japan nor to Russia," and that the Ainu have inhabited the territory "since time immemorial," according to Itar-Tass News Agency.

The Ainu have asked that they be granted free access to the islands, and hope to make them an autonomous area of the Ainu nation in the future.

Scientists believe that several thousand years ago the Ainu ethnic group inhabited the whole of Japan, the lower reaches of the Amur River, the Kamchatka Peninsula, the Sakhalin and Kurile Islands.

For more on the Ainu and the breadth of their original territory, see the online presentation of The Smithsonian's pioneering exhibition, "Ainu: The Spirit of a Northern People" that reveals the magnificence of their sea-faring, trans-continental culture (incomparably more sophisticated, prosperous, and creative than the diminished and impoverished far-flung Russian satellite colony that exists in the Kuriles today).

The United Nations Declaration on the Rights of Indigenous Peoples, recognizing the individual and collective rights of the world's 370 million indigenous peoples (including the right to self-determination, and the right to give or withhold free, prior and informed consent when it comes to the exploitation of our lands, territories and resources) was adopted on September 13, 2007 following more than two decades of negotiations between governments and indigenous peoples' representatives. A majority of 143 states (including Japan, excluding Russia which abstained from voting) voted in favor of the Declaration. (Former British colonies Australia, Canada, New Zealand and the United States voted against the Declaration, but in the past three years, Australia and Canada reversed their position) In 2008, the Japanese government formally recognized the Ainu as "an indigenous people with a distinct language, religion and culture".

(For recent coverage on Russia's continuing conflict with the indigenous people of Sakahlin, see this 2009 AFP video report. "Sakhalin Energy Project Hampering the Nivkh's traditional lifestyle" that shows how Russian oil exploitation has been destroying what remains of the Nivkh landscape, people and culture.)

Follow-up: On November 12, Canada also reversed its position on the U.N. Declaration on the Rights of Indigenous Peoples.
Posted by TenThousandThings at 4:31 PM
Email ThisBlogThis!Share to TwitterShare to FacebookShare to Pinterest
Labels: Ainu, animals, indigenous, Japan

A wonderful piece. Very informative. What would have helped would have ben the inclusion of maps and perhaps some comments from the Ainu themselves over this. As well, perhaps a follow-up on what happened to the little girl in the Stalin photo. We know what happened to her father - but did her mother survive? Is the girl still alive? What is her name? I'm curious!