The Practice of the Wild featuring Gary Snyder comes to NY starting Nov. 10

The wild requires that we learn the terrain, nod to all the plants and animals and birds, ford the streams and cross the ridges, and tell a good story when we get back home.

So writes legendary Beat poet Gary Snyder in his influential 1990 collection from which this celebratory documentary takes its name and finds its restoring rhythms of nature, image and word. Occupying a hallowed yet humble position within the realms of poetry, academia, ecological activism and spiritual practice, Snyder has distinguished himself among peers such as Allen Ginsberg and Jack Kerouac by becoming both a countercultural hero and a Pulitzer Prize winner.

Director John J. Healey skillfully intertwines the many fascinating aspects of Snyder’s journey through nature and across the page, sagely pairing the poet with his cantankerous compadre and fellow scribe Jim Harrison. Together, the two old friends roam the verdant hills of the central California coast, musing eloquently and with hard-won wisdom and earthy humor on Bay Area bohemia, Zen Buddhism and the morally charged interdependence of all living things.

Whether reminiscing about a camping trip with Kerouac, recalling the writing of his seminal Turtle Island or being held by his ankles and dangled over a cliff in Japan as a test of truth-telling, Snyder is a warm and captivating presence.

“Life in the wild is not just eating berries in the sunlight,” the poet tells us, and true to his ageless inquisitiveness, The Practice of the Wild seeks out and finds so much more.


Oecology, as it used to be spelled, is a scientific study of relationships, energy-transfers, mutualities, connections, and cause-and-effect networks within natural systems. By virtue of its finding, it has become a discipline that informs the world about the danger of the breakdown of the biological world. In a way, it is to Euro-American global economic development as anthropology used to be to colonialism. That is to say, a kind of counter-science generated by the abuses of the development culture (and capable of being misused by unscrupulous science mercenaries in the service of the development culture). The word “ecological” has also come to be used to mean something like “environmentally conscious.”

Read Gary Snyder's entire essay — "Ecology, Place, and the Awakening of Compassion" — at KJ online at this page. 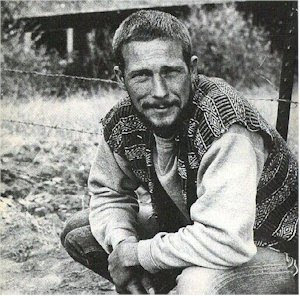 For more on Gary Snyder, see this comprehensive collection of background info at Modern American Poetry.

A set that includes The Practice of the Wild DVD and a companion book (The Etiquette of Freedom) is available at online book dealers for around $US20.
Posted by TenThousandThings at 10:36 PM
Email ThisBlogThis!Share to TwitterShare to FacebookShare to Pinterest
Labels: books, compassion, ecosystems, films, interconnections, local, nature, NYC, poetry