Matias Echanove, Geeta Mehta and Rahul Srivastavavarious conceived the idea of URBZ (user-generated cities) with fellow urban planners, architects, artists, and other people engaged in the organic formation and direction of the cities in which they live.

Their goal: to challenge bland generic redevelopment plans presented as urban rationalization and modernization and offer alternative visions of urban community generated by those who actually live in these communities.

They began their collaborations in the 2000's in Tokyo (focusing on saving Tokyo's most creative neighborhood, Shimokitazawa) and Mumbai:


The initial concept of URBZ was born in the mind of a restless group of urban planning students in New York in the early 2000’s. The idea was to exchange knowledge about cities, network and travel globally for events and conferences. URBZ was developed as an early and basic prototype of social networking sites such as Flickr and Facebook.

After various phases of trial and development the project nearly died. It was resuscitated in Tokyo and in Mumbai by Geeta Mehta, Matias Echanove and Rahul Srivastava as participatory urban planning, architecture and research tool. The recent spread of open source web content management systems such as Drupal and Worpress made it easier to develop media rich participatory websites.

www.urbz.net functions as a virtual office for projects in cities including New York, Tokyo, Mumbai, Goa and Geneva. In addition to maintaining its website and providing support to partner organizations and initiatives, URBZ members organize workshops where ideas and visions about localities are expressed and shared. URBZ believes that the encounter of local actors and global contributors unleashes new potentials at all levels.

Their latest gathering is upcoming in India: 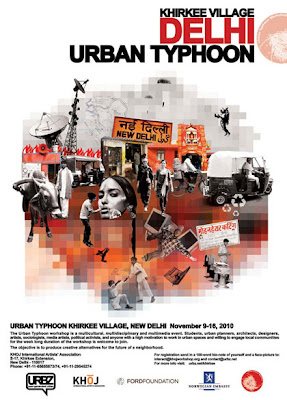 The Urban Typhoon Workshop New Delhi will be held in Khirkee Village from November 9-16, 2010.

The Urban Typhoon Workshop invites artists, architects, academics, activists and other practitioners to work in Khirkee Village and conceptualize alternative scenarios for its future along with its inhabitants.

The workshop will start on November 9th with the self-formation of the participants into small groups and end on November 16th with collaborative output in the form of plans, projections, installations, multimedia events being presented to the inhabitants and the city at large.

Khirkee, where KHOJ International Artist's Association has its studios, is one of the several urban villages that make New Delhi's fabric unique. KHOJ is one of the leading contemporary art incubators in India. Its presence in Khirkee has made it possible for artists and inhabitants to interact and start a conversation about alternative ways of experiencing and developing the village.

URBZ brings its expertise of organizing cross-disciplinary dialogues in the area of urban planning. The partnership between URBZ and KHOJ hopes to forge new relations between art and urban practices along with encouraging constructive dialogues and collaborations between residents, civic officials and urban practitioners of all kinds.

For more background on user-generated cities, see Urbanology (fascinating page on Tokyo), and Save the Shimokitazawa.
Posted by TenThousandThings at 5:06 AM
Email ThisBlogThis!Share to TwitterShare to FacebookShare to Pinterest
Labels: art, community, creativity, India, Japan, life-sustaining civilization, local, NYC, Tokyo