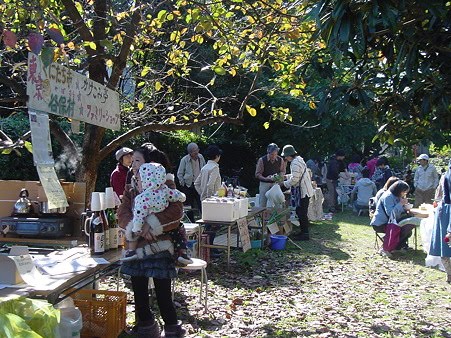 The soaring birds seem to ask:
Who created borders between countries?
Grass, birds, humans…
All are the same living beings.

Yesterday, in a tiny park located within the western metropolitan Tokyo city of Tachikawa, a collection of artists, musicians, political activists, local food growers, and community folks of all ages gathered for the 20th annual Sunagawa Aki Matsuri (Autumn Festival).

While the food stalls, children’s games, and overall festive atmosphere may have made the event appear to be just like any other neighborhood gathering, in fact there was a deeper story lying underneath the surface. Put in context of events occurring in the same vicinity 54 years earlier, the energy of the festival resonated with what might be described as pain that has been transformed into joy.

In October 1956, in land adjacent to the park, a collection of farmers, students, Buddhist monks, and other sympathetic citizens gathered to stop a group of surveyors and police officers who had come to measure the land for expansion of the nearby Tachikawa Airbase. The facility served as a launchpad for U.S. B-29 bomber planes, and plans were afoot to swallow up even more local farmland surrounding the existing base. When the protesters refused to back down, police began attacking them with batons. 500 people were wounded, resulting in a national outcry. Three days later, largely as a result of this fallout, the government canceled the surveys.

Dennis Banks, a Native American organizer and co-founder of the American Indian Movement, was stationed at the airbase at the time and witnessed the bloody melee of officers brutalizing the defenseless crowd, which included students as well as monks rhythmically beating their drums. When I had the fortune to speak with him several years ago in Hiroshima, he told me that this experience had had a huge impact on his psyche—and was one of the factors that helped lead him away from the U.S. military and into a life of activism.

The organizers of the Sunagawa Autumn Festival include several people who vividly remember the protests, and who view the event as a chance to help keep history alive. One such person is Katsuko Kato, the founder of the watchdog group Tachikawa Self-Defense Force Tent-Mura (known simply as Tent-Mura, or "Tent Village"). In 2004, three members of the organization were arrested and prosecuted after placing anti-war flyers in the mailboxes of a Japanese Self-Defense Force housing unit. Despite eventually losing at the Tokyo High Court to charges of trespassing, members still remain determined that peace and justice will prevail.

One case in point: at the edge of the park stands a small sign stating that the land is government property and not to be trespassed on. Holding the annual autumn festival there, as well as growing vegetables year-round in the adjacent field, therefore serve as small acts of civil disobedience on the part of organizers. Even in the face of government opposition, they continue to utilize the land to farm in peace--the natural, life-affirming purpose for which they believe it was always intended.

The daikon radish leaves rustle in the blue sky:
Autumn has arrived in Sunagawa.
Even the persimmon trees in the park
Beckon smiling visitors
As they continue to yearn for a true peace. 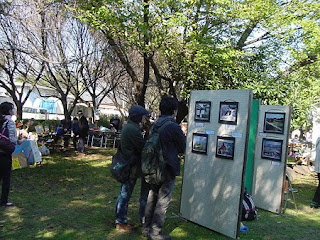 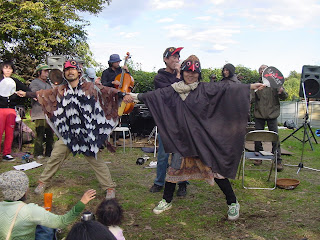 Right: Dancers dressed as yanbaru kuina (a bird native to the Yanbaru forest of Okinawa, which is now under threat of U.S. military construction of helipads for Osprey helicopters)

For more on the history of the Sunagawa Struggle, see this excellent article by Hasegawa Kenji.

Poetry is from the Sunagawa Aki Matsuri event flyer (translations are my own).