As the governor and citizens of Okinawa face the latest military threat to their quality of life and safety (planned deployment of accident-prone V-22 Osprey transport aircraft for low-level flight training in Futenma), Jon Mitchell's article exploring  the origins of Okinawan resistance to the U.S. military human rights and property rights violations brings home the longevity of the  Okinawan struggle  for freedom from the military violence throughout their islands.

In 1955, 300 US soldiers with rifles and bulldozers dragged women and children from their beds, destroyed their homes and slaughtered their goats after they refused to voluntarily leave their farms in Iejima, one of Okinawa prefecture's small islands, to make way for a U.S. bombing range. When the forcibly removed farmers were allowed to return after incarceration for resisting the seizures of their homes and farms, the soldiers forced them to live in tents on barren land. With no crops, they foraged on the margins of the bombing range for shrapnel to sell for scrap, where soldiers shot at them. Despite these atrocities, Iejima's farmers refused to succumb to demoralization and defeat.

Leader Shoko Ahagon drew up policies inspired by Gandhi to guide their political action: nonviolent resistance and mass demonstrations. This resulted in some concessions and the prevention of U.S. deployment of nuclear missiles on the island in 1966. Ahagon is now known as the founder of the Okinawan civil rights movement:

During the 30-minute ferry ride from Motobu on mainland Okinawa, Iejima reveals itself in stages. First, Mount Tacchu emerges above the waves like a chunk of the peanut brittle for which the island is renowned. Next, the wind-blown scent of countless thousands of hibiscuses sweetens the stink of the ship's diesel engines. Finally, swaths of sugar cane come into view — followed by khaki-green tobacco fields and white sand beaches flanking the island's southern shores. 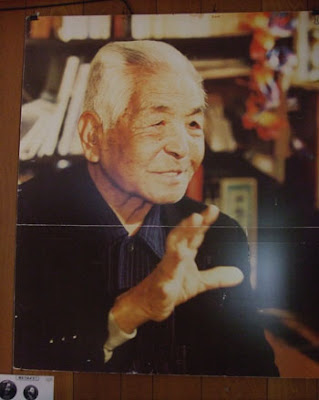 Man of peace: Shoko Ahagon, father of Okinawa's civil rights movement, is seen in this poster welcoming visitors to the Treasure House of Life museum.

Without question, Iejima is a beautiful place — but dig a little deeper and you soon realize that, beneath its rich red soil, there lies an awful lot of suffering.

Most visitors are well aware of the savage fighting that raged on and around the island during the Battle of Okinawa in 1945. Some tourists pose for photographs next to a monument that marks the spot where Pulitzer Prize-winning U.S. war correspondent Ernie Pyle lost his life on April 18, 1945, while others clamber through the shattered ruins of the island's former pawn shop.

However, judging by the lack of names in the visitor book of the Treasure House of Life museum, very few people know about the second American invasion of Iejima — the one that occurred in 1955.

"Here on the island, we don't use the phrase 'postwar,' " explains Shoko Jahana, the museum's caretaker. "For us, it is as though we are still living in a war zone."

In the barracks-like museum, photographs chronicle the underhanded way in which, 56 years ago, the U.S. military went about transforming the western half of Iejima into an aerial bombing range.

With all of Okinawa under U.S. administration, the authorities started by tricking the landowners into signing voluntary evacuation papers, Jahana says. But then, when some families refused to leave, 300 U.S. soldiers with rifles and bulldozers dragged women and children from their beds, tore down their homes and slaughtered their goats.

"That's when Ahagon-sensei decided to act," says Jahana, pointing to a large poster of a smiling man with a tanned face.

Shoko Ahagon — the father of the Okinawan civil rights movement — was not your average farmer. As a young man, he converted to Christianity and went to Cuba to seek his fortune. Returning to Iejima, he'd embarked upon a temperance campaign. His experiences of talking the island's hard-drinking menfolk into abandoning their awamori spirits would prepare him well for his bid to persuade the Americans to return their land.

Inspired by Gandhi's principles of passive resistance to British rule in India, Ahagon drew up a list of policies for the farmers in their dealings with the military. These included the need to stay calm and retain faith in the inherent good of individual Americans. These policies are painted in big letters on the museum's wall — and they continue to inspire Okinawa-wide struggles against the presence of U.S. bases.

Another tactic still influential today is the organization of mass demonstrations. In July 1955, Ahagon led the displaced farmers on a seven-month circuit of the Okinawan mainland in order to inform people of their mistreatment. At a time when the United States kept the Okinawan press strictly censored, this "Beggars' March" won the farmers much-needed publicity for their plight — yet the U.S. military remained unmoved.

Upon their return to Iejima, the farmers were forced to live in tents on the barren land to which they'd been relocated. With their crops gone, they resorted to foraging on the margins of the bombing range for shrapnel to sell for scrap. The museum's photographs show the tragic consequences of such desperate actions — farmers were shot by American soldiers, maimed by stray bullets or blown limbless as they attempted to defuse unexploded ordnance.

Despite these atrocities, Ahagon and the farmers never gave up on their appeals to the conscience of the U.S. military.

Over the years, this unrelenting pressure bore fruit — their vigilance prevented the islanders from suffering the crimes so common elsewhere on Okinawa, and they won the right to farm their fields when the range was not in use. "But even today," explains Jahana, "about 30 percent of Iejima remains under U.S. control."

After leaving the museum, I head to the island's west coast in order to see for myself the American base. While the military has moved its live ammunition drills elsewhere, it continues to use the installation to practice parachute drops — and barbed-wire fences cordon off a massive expanse of Iejima's most fertile farming land. Outside the base, in the ashes of a farmer's bonfire, I spot charred cartridges and the tail fin of a rocket — reminders of the bitter harvest some islanders died collecting.

A short walk away stands an A-framed building with freshly painted slogans on its walls. This is the hut from where Ahagon and the farmers used to ensure that the Americans' exercises did not stray beyond the confines of the base — and it was from here that, in 1966, they staged a successful campaign to prevent the U.S. military from installing nuclear-armed Nike missiles on the island.

Recalling the museum's photographs of this hut packed full with demonstrators, I peer through the building's windows. Its newly painted exterior proves deceptive — inside, the room is thick with dust and looks abandoned to the spiders.

Behind me, an elderly farmer pulls up on his tractor. When he finds out I've just come from the museum, he tells me he used to know Ahagon well. "Ahagon-sensei dedicated his whole life to the islanders of Iejima. He was a hero," he declares.

Iejima was a precursor in the 1950's Okinawa of forceful land expropriations by the U.S. military at bayonet point and bulldozer to expand already-existing bases. Following Iejima came Isahama in now Ginowan City (Camp Foster) and Gushi in Oroku (now incorporated into Naha City) (Naha Air Base, formerly operated by the U.S. Air Force, currently by SDAF). Futenma had already been turned into a forward operating base for the U.S. Marine Aviation Squadron to attack mainland Japan.

The Marine Corps says when the base was built, there was nothing in the area except for barren wilderness. But that's not true. There were five idyllic villages there before the war: Ginowan, Kamiyama, Nakahara, Maehara and Shinjo, all forced to be located outside of the fences and eventually becoming local districts of today's Ginowan City. Old villages were swallowed up into the base and its 2,300-meter runway together with rich farm lands. The Futenma village was located just outside of the encroached land of the base and so escaped the ill fate of incorporation.

If U.S. policy planners feel no qualms of conscience about the dark history of those U.S. bases in Okinawa, then they are real villains with no human mind. That explains why they can brazenly demand a quid pro quo for Futenma's facilities in Henoko, Okinawa, all footed by Japanese taxpayers.