Hong Sung-dam: "Gangjeong by the Sea" 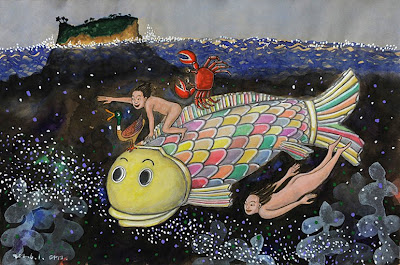 Hong Sung-dam was born on the island of Hauido and raised in Gwangju, where as a youth, he took part in the 1980 uprising against Chun Doo-hwan's military dictatorship. In July 1989, Hong was arrested for allegedly breaking the National Security Act for sending slides of a mural he had created, along with around 200 other South Korean artists, to North Korea). Amnesty International adopted him as a prisoner of conscience; he was released from prison (where he was kept in solitary confinement for three years after being tortured by the Korean CIA) in the early 1990s.

A member of Korea's globally renowned Minjung (politically and socially engaged) art movement, the artist was commissioned by the Government of South Korea to create a mural for Chonnam National University. Human Rights Solidarity published this interview with Hong Sung-dam in 2002: "War Serves the Politicians but Not the People." 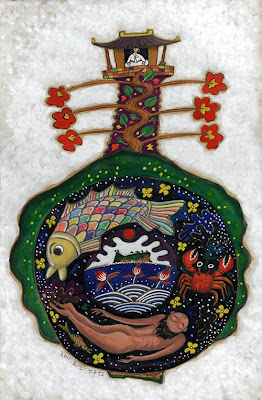 "Gangeong by the Sea II" by Hong Sung-dam
Posted by TenThousandThings at 12:00 AM
Email ThisBlogThis!Share to TwitterShare to FacebookShare to Pinterest
Labels: art, creativity, democracy, Human rights, Korean Peninsula, oceans, Save Jeju Island