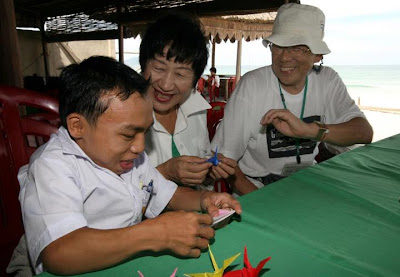 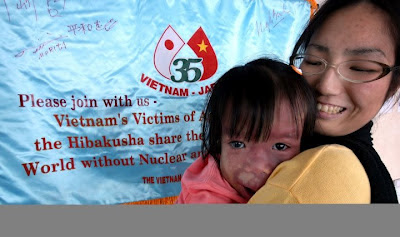 (Little Van, an Agent Orange victim from Vietnam, sailed with Peace Boat for a week, and got a lot of love from Peace Boat participants, here with Marianna Aoki. Photo courtesy of Lee, Jung Yong) 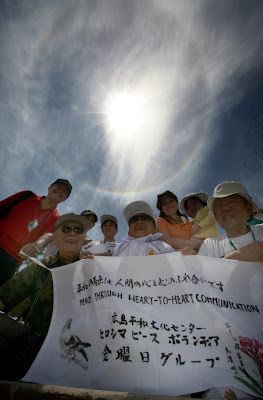 (In Da Nang with a group of nuclear bombing survivors from Hiroshima and Nagasaki
and Agent Orange victims. Photo courtesy of Lee, Jung Yong)


Via Rose Welsch, some remarkable photos from Peace Boat's 63rd voyage "for a Nuclear-Free World" that took place from September 2008 to January 2009. During the voyage, 102 Hibakusha visited 22 ports in 20 countries over three months to share their testimonies with people from around the world and called for the abolition of nuclear weapons.

At their first stop in Da Nang, Vietnam, the Hibakusha met and exchanged testimony with Agent Orange survivors and 2nd- and 3rd-generation victims.

Starting on August 10, 1961, the US military began spraying Agent Orange, a chemical weapon, throughout Vietnam to destroy forest canopy and farmland. The result: an ecological and public health catastrophe. According to the Vietnamese government, up to four million people in Vietnam suffer from diseases related to Agent Orange. Similarlly to nuclear radiation, Agent Orange damages DNA, and causes birth deformities. Just as the nuclear bombings of Hiroshima and Nagasaki radiation impacted later generations in Japan, so has Agent Orange in Vietnam (and as is depleted uranium in Iraq and Afghanistan).

Da Nang was particularly affected because the US military stored and loaded Agent Orange onto planes at a coastal air base there. Phuong & Little Van, in the above photographs, are from Da Nang, and joined the Peace Boat Hibakusha Project for a week of sharing, mutual support, and love.
Posted by TenThousandThings at 11:43 AM
Email ThisBlogThis!Share to TwitterShare to FacebookShare to Pinterest
Labels: global hibakusha, healing, Hiroshima, Japan, love, Nagasaki, Nuclear-Free, peace, peace networks, Vietnam