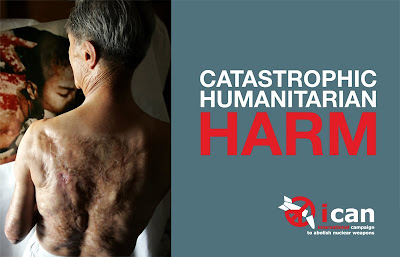 "As a 16-year-old boy, I was riding my bicycle down the street when the atomic bomb exploded 1.8 km away, scorching my back and leaving the skin on my right arm hanging down from the shoulder to the fingertips."

After 17 excruciating operations and a lifetime of struggle, Sumiteru Taniguchi, 67 year since the bombing of Hiroshima, still fights pro-actively to make sure no one has to suffer what he experienced in Hiroshima ever again.

In remembrance of Hiroshima Day and all of the past and potential future victims of the nuclear industry, the International Campaign to Abolish Nuclear Weapons (ICAN) has launched a booklet for free digital distribution on the catastrophic humanitarian consequences of nuclear weapons. Download here: http://www.icanw.org/files/ICAN-CHH.pdf


The International Campaign to Abolish Nuclear Weapons (ICAN), a movement of non-government organizations in 60 countries advocating such a treaty, believes that discussions about nuclear weapons must focus not on narrow concepts of national security, but on the effects of these weapons on human beings – our health, our societies, and the environment on which we all depend.

ICAN notes that the same humanitarian discourse was used successfully in banning landmines and cluster munitions. While sharing the stories of anti-nuclear advocates and the survivors of nuclear bombing, testing, and mining the booklet provides pertinent information on:
With nuclear weapons and nuclear-based technology (including nuclear reactors) still proliferating no one is safe should disaster arise. Just recently, Japan's former Defense Minister Shigeru Ishiba's statement about the use of Japan's nuclear reactors as a deterrent was made public: "Having nuclear plants shows to other nations that Japan can make nuclear weapons." 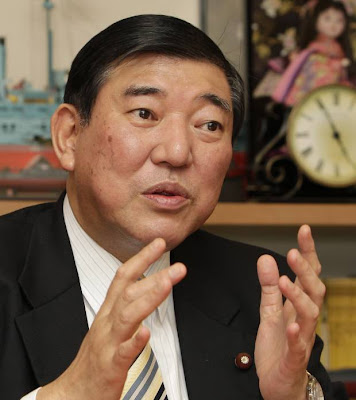 Unless we have a paradigm shift now, we will continue to be used by governments and industry as test mice of this obsolete nuclear deterrent ideology, living in a house of cards on a slanted table.

This booklet serves as a heart-wrenching reminder of the tragedies of the nuclear industry and the political stranglehold the industry maintains despite the enormous destruction it causes. It is a useful resource for anyone just learning about the consequences of nuclear weapons or fighting to make the shift to a nuclear-free world a reality.

Learn more about how you can abolish nuclear weapons: