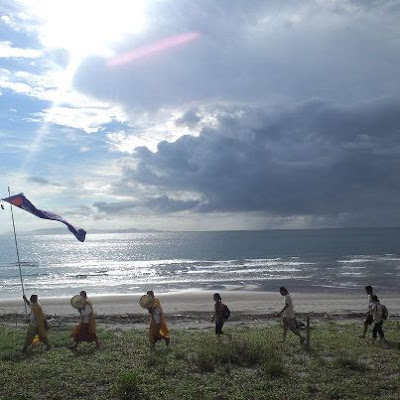 (空から一条の光が玄題旗に降り注ぎ、雲に、紫の帯になって、映っているようです！At the Kagoshima Prefecture Sendai nuclear power plant, before fasting, the priests engage in a prayer walk for purification from the sea. A streak of light from the sky fell on the flag from the sky, the clouds turned purple. Photo: Walk of Life on Facebook)

In early February, Nippon Myohoji Buddhist priests began a "Walk Of Life" across Japan, stopping at all the country's nuclear plants to offer prayers to the sacred grounds of each of these locations. Their final stop will be the Hiroshima Peace Memorial Park on August 6.

This photo was taken in Kagoshima, at the southern tip of Kyushu.