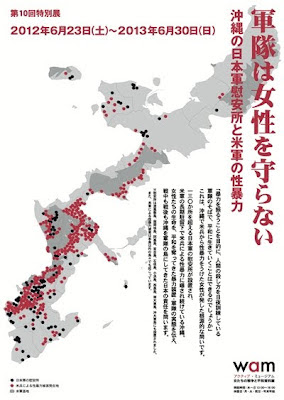 
In a yearlong exhibition through next June, the Women's Active Museum on War and Peace shows there were at least 145 "comfort stations" in the islands, at which women not only from Japan but also from Korea and Taiwan were forced to provide sex to Japanese soldiers.

The exhibition, "Comfort Stations in Okinawa and Sexual Violence by U.S. Forces," also introduces testimonies from 300 Okinawa women who were sexually assaulted by U.S. military personnel in the postwar era, although they are believed to be just the tip of the iceberg.

"We hope to show that women have faced sexual violence by military forces in Okinawa in wartime as well as even in the postwar period," said Mina Watanabe, secretary general of the museum known as WAM.

"We expect visitors to the exhibition to be aware this has resulted in Japan's creation of comfort stations and its policy of forcing the bulk of U.S. military bases in Japan on Okinawa," she said.

The findings presented on more than 30 panels at the exhibition are based mainly on decades of research by historians, activists and journalists, who examined documents compiled by the Japanese military and municipalities of Okinawa while collecting testimonies of those who lived near the comfort stations and witnessed the exploitation of women, the organizers said...''

A panel quotes a history book compiled by the municipal government of Yomitan: "There were four Korean comfort women. On holidays, soldiers stood in line (in front of a comfort station) from daytime, leading the village residents to turn their eyes away from them."

A Haebaru resident remembers a girl aged around 13, who served as a nanny in the daytime and as a "comfort woman" in the evening, saying, "She sometimes innocently showed me money that she received from soldiers," another panel indicates.

Comfort stations were built even in remote islands, with Tokashiki Island, now a major diving spot, having seven Korean comfort women aged 16 to 30.

Among them was Bae Bong Gi, who was taken to the island from Korea in 1944, and forced to provide sex under the Japanese name, "Akiko."

She remained in Okinawa even after the end of the war and engaged in marginal work. Suffering headaches and nerve pain in old age, she died in 1991 at the age of 77 without returning home. Another of the seven on Tokashiki, meanwhile, died in a U.S. attack at the end of the war.

While Bae talked about her life in interviews before her death, "many women remained unable to come out," Watanabe said...

The exhibition was also held in Okinawa through mid-July.

The Women's Active Museum of War and Peace opened the summer of 2005, the sixtieth anniversary of Japan's defeat in World War II, to focus on "violence against women during wars and armed conflict, from a gender perspective."

See also "Statement of protest against the sexual assault on an Okinawan woman by a US Marine Corps serviceman, & demand for withdrawal of US Military Forces" posted on September 5, 2012, about a recent protest by Okinawa Women Act Against Military Violence (OWAAMV) of yet another US military sexual assault upon an Okinawan woman (while returning to her home).
Posted by TenThousandThings at 12:34 PM
Email ThisBlogThis!Share to TwitterShare to FacebookShare to Pinterest
Labels: children, civilian victims of military violence, Japan, Pacific War, women