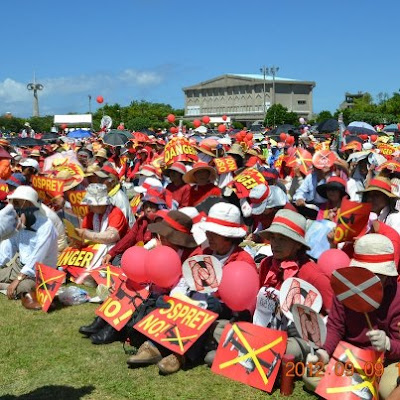 The Ryukyu Shimpo, one of two major Okinawan newspapers, points out threat to public security is just one of many issues addressed by the rally opposing US V-22 Osprey aircraft low-level training and testing in Okinawa.  The rally is also about democratic process, environmental justice, decades of profoundly unequal and abusive relations between the US and Okinawa characterized by violent seizures of land by "bayonet and bulldozer" from owners, environmental destruction, toxic weapons testing, noise, military sexual assaults, and other crimes)

The rally is also an Okinawan witness and testimony for peace, as their prefecture was the only Japanese battlefield during the Pacific War:

For the people of Okinawa, today is the day of an historic mass rally. In this rally the young and the old, men and women and people of all walks of like will participate to express their opposition to the deployment of the MV-22 Osprey vertical take-off and landing transport aircraft to U.S. Marine Corps Air Station Futenma. People who value the spirit of democracy and the democratic process are filled with a sense of impending crisis. This thoroughly bipartisan rally will be the first motion that will culminate in a huge wave of opposition. The Okinawan people will not accept the “inherently defective aircraft” that threatens their lives, property, safety and security. Washington and Tokyo are advised to take this situation seriously, because people are standing up to take up action over the sanctity of life – the Government needs to understand that this rally is a committed cry of the people. Okinawans have applied themselves many times in various ways in an attempt to resolve base-related issues since the end of the war. Now, resentment towards the military-first policy that the governments of Japan and the United States have foist upon them has built up to a broader and deeper extent than ever before...

After the war, Okinawa faced many difficulties because the U.S. military forces seized Okinawan people’s land at the point of a bayonet and bulldozed everything in its path to construct military bases. To add insult to injury, U.S. military personnel further trampled on Okinawan people’s human rights by raping Okinawan women. In 1959, a military aircraft crashed into Miyamori Elementary School in Ishikawa, killing 18 pupils.

The deployment of the Osprey to Futenma essentially represents an “indiscriminate attack” on the Okinawan people among the many inhumane acts perpetrated in Okinawa by the U.S. military forces. If the Japanese and the U.S. government force the deployment of the Osprey aircraft on the prefecture, the Okinawan people will undoubtedly come to oppose not only the U.S. Marine Corps but all four arms of the U.S. military.

There are 20 airspaces and 28 water areas used for training under the U.S. military administration around the islands of Okinawa Prefecture. Local people are not allowed to freely use the land, sea and sky that belong to Okinawa. Taking advantage of the Status of Forces Agreement, which grants privileges to the U.S. forces in Japan, U.S. forces exert extra-territorial rights to an inordinate extent. Does the U.S. government think that Okinawa is an American colony?

After Okinawa’s reversion to Japanese sovereignty, there have been 522 accidents, including U.S. military aircraft crashing, or making emergency landings. Up until the end of December 2011 those accidents had caused 34 casualties with another 24 people missing. The fiery explosion of a U.S. Marine helicopter that crashed onto the campus of Okinawa International University in the summer of 2004 is still fresh in our minds...