Gavan McCormack: "This is no longer an opposition movement but a prefecture in resistance, saying “No.”

A must-read for anyone who follows Okinawa and Japan...Published on Sept. 9, at the Ryukyu Shimpo, (one of Okinawa's two major newspapers): Gavan McCormack's "This is no longer an opposition movement but a prefecture in resistance, saying 'No.'”

Great issues are at stake in the Osprey contest and the 5 August Meeting. After four decades of lying to, discriminating against, and betraying Okinawa, time and again, decade after decade, the governments of Japan and the United States now seem to have provoked it to an intolerable degree. By determining to impose on it something that the people of Okinawa say they will not accept, they substitute authoritarianism for democracy...

Two decades after the end of the Cold War, the relationship between Tokyo (backed by Washington) and Okinawa resembles nothing so much as that between Moscow and Budapest or Warsaw at the height of the Cold War. Okinawan views are as much respected and listened to in Tokyo and Washington today as once Hungarian and Polish sentiments were respected in Moscow.

After decades of struggle, however, on these issues there is no longer an Okinawan “government” and “opposition.” Local government heads and assemblies, social and citizen groups are one, and it is the conservative Governor who suggests that if the Osprey are so safe they could be deployed to Hibiya Park or Shinjuku Gyoen. This is no longer an opposition movement but a prefecture in resistance, saying “No.” Japanese history has no precedent for this.

There is of course much more at stake than the Osprey. The Okinawan movement that says “No” to the Osprey says “No” also to the Futenma substitution project at Nago and “No” to the Osprey Helipad construction project at Takae. It also is deeply sensitive to other signs of intention to militarize the Southwestern islands in general and turn it into a front-line of confrontation with China: to construct a new (Self-Defence Force) base on Yonaguni, to have US and Japanese forces gradually merge and share the existing bases (in the name of “bilateral cooperation”), and to turn Shimojishima airport on Miyako Island and Mageshima in Kagoshima Prefecture into bases.

When the DPJ abandoned one by one its 2009 electoral pledges and began to morph into a clone LDP, mainland Japan sank into a stupor of political disillusion, but Okinawa returned to struggle with renewed energy...

Today’s Okinawa struggle is a root a struggle over how Japan is governed and how it should be governed. In a rapidly changing world in which the US is losing both its economic and its moral authority, how can it be in the national interest for Japan to cling to its client state dependence on the United States and to steadily militarize? The anti-militarist Okinawan struggle constitutes a precious resource, pricking the national conscience and spurring mainland Japan to greater civic courage... 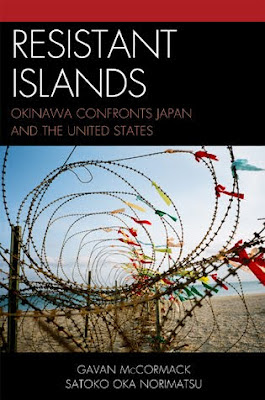 Gavan McCormack is a scholar specializing in East Asia and a coordinator of The Asia-Pacific Journal: Japan Focus. His recent books include Client State: Japan in the American Embrace and Resistant Islands: Okinawa Confronts Japan and the United States (excerpted today at APJ.
Posted by TenThousandThings at 9:36 PM
Email ThisBlogThis!Share to TwitterShare to FacebookShare to Pinterest
Labels: books, citizen action, democracy, Japan, Okinawa, peace