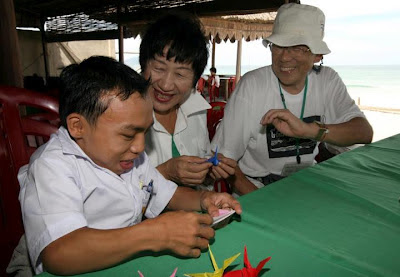 Via Rose Welsch of Peace Boat, Global Article 9, and US for Okinawa:


August 10th marks the day in 1961 when the U.S. began aerial spraying of toxic herbicides over Vietnam.

Tainted with dioxin, Agent Orange not only sickened Vietnamese people, it also poisoned U.S. service members who were exposed to it. Its effects did not stop when the war ended--second and even third generations of survivors have experienced a wide range of effects, such as birth defects and cancer.

In total, more than 3 million people have been affected by it and related chemicals. Unknown to many, Canadians become some of the first victims of these toxic chemicals when they were sprayed and tested at a large base called Gagetown before being used in Vietnam. Moreover, because U.S. military bases in Okinawa, Korea and Guam were used during the war in Vietnam, people were also exposed to Agent Orange in these places. Laos was also sprayed with Agent Orange, and Cambodia was affected by it when the spraying drifted from Vietnam over its border.

On this day, we also call for individuals, civil society, and governments to work together to create a culture of peace around the world to prevent similar tragedies from being repeated.