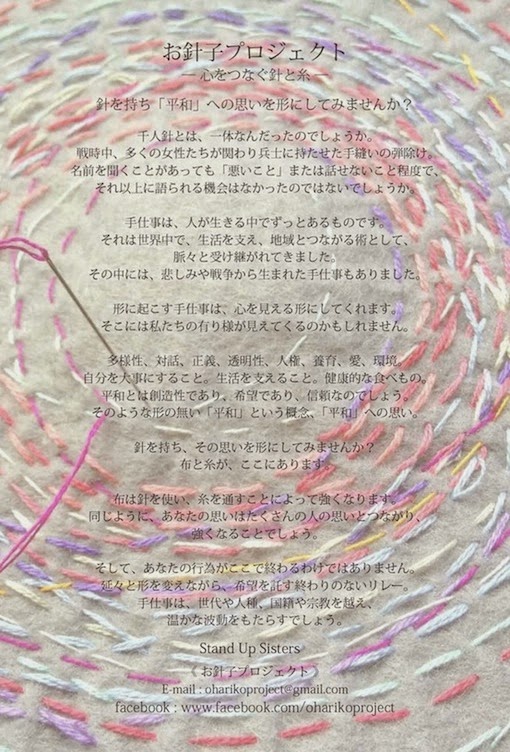 Hoping to see their men return home safely from battle, women in wartime Japan would often send soldiers off with a protective amulet called a "thousand-stitch belt" -- or "senninbari" -- a cloth wrap that, as its name suggests, featured 1,000 stitches sewn by 1,000 different women.

To prevent the tradition from fading into history, a Tokyo-based women's artist collective known as "Stand Up Sisters" is holding a "needle and thread for peace" ("Ohariko Project") exhibition at the Hako Gallery in Tokyo's Yoyogi-Uehara district. In addition to educating younger generations about the existence of the "senninbari" tradition, the exhibit also offers visitors a chance to participate in hands-on stitching -- thereby encouraging people to consider history in a more personalized way.

Miho Tsujii, a member of the collective and one of the event organizers, explained that putting together the exhibition was a challenge -- if for no other reason than the fact that almost no information on the practice was available.

"We almost never hear the word 'senninbari' today, but when we do, it is usually surrounded with an air of secrecy," she explained. "This is likely due to the fact that war memories are a very painful topic for people to discuss -- and that the subject also tends to be tinged with accusations of complicity in the war."

Tsujii added that most women likely presented the soldiers with the belts because they wanted them to come home safely -- although some may have done so hoping that the men would die honorably in battle.

"This is just speculation, however, since there has been so little material handed down about 'senninbari' history that we really just don't know for sure," she said. The practice is said to have begun around the time of the First Sino-Japanese War of 1894-1895, and Tsujii added that while the government eventually organized the initiative into a full-scale war support effort, its origins were likely rooted in pre-modern Shintoism.

Stand Up Sisters has held various exhibitions focused on the common theme of encouraging women's empowerment and self-expression through art.

Following last December's return to power of Prime Minister Shinzo Abe -- known to support creating an official Japanese military, and also the target of feminist criticism during his first term on 2006-07 for his conservative views toward women -- the members of the collective decided to organize an exhibition that would feature the keywords "women" and "war." It was then that they hit on "senninbari."

"In doing our research on the history of the practice, we also came across the technique of "tamadome," or "knot-stitching," which was common among our grandmothers' generation," commented collective member Ayumi Taguchi. "This fit in with our theme of passing down techniques that may be lost to future generations if young people do not learn them."

Visitors to the exhibition are encouraged to sit down at the gallery's communal table and stitch for as long as they like -- and in whatever style they want to -- using the available cloth, needles and thread, while also enjoying snacks and relaxed conversation with the artists and other attendees. 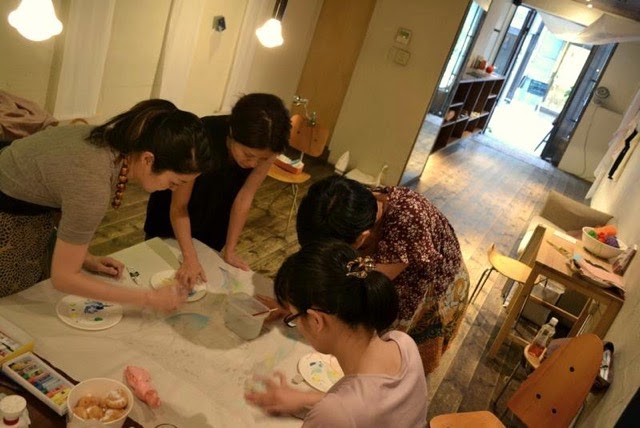 "Participating in this project was a fascinating experience," commented local resident Chika Hirata after stopping by the exhibition. "I found the stitchwork to be extremely relaxing -- and I also found myself imagining that women in wartime probably felt a similar sense of calm from concentrating on this kind of handiwork. It must have given them some relief from the complex thoughts that were likely racing through their minds at the time."

"Each of the women who engaged in 'senninbari' had her own unique story to tell," commented Stand Up Sisters member Nao Ushikubo, who also cited members' concern with political matters as a motivating factor in organizing the exhibition.

"With all of the talk in the news regarding constitutional revision and the Trans-Pacific Partnership (free trade talks), we began to fear that Japan was possibly headed down a similar path as it was prior to the First World War, which we found extremely disturbing," she said. "Even this week, around the anniversary of (World War II's) end, the Japanese media is full of reports about how our country is building up its defense capabilities. Clearly, the majority of people here don't realize that this may lead to war, which is really disheartening and frightening."

The gallery is also hosting several related exhibitions in addition to the "needle and thread for peace" workshop, including postcards from the Puerto Rico-based "Honoring our Black Grandmothers" project encouraging island residents to take pride in their racial identity; a display of T-shirts designed by street children in India through the Tara Trust project that will eventually be given to children in Fukushima affected by the nuclear disaster; and sales of handcrafted cloth figures designed by local homeless women through the "Nora" project.

The exhibition is ongoing at the Hako Gallery in Yoyogi Uehara from 11 a.m. to 8 p.m. through Aug. 18, 2013. For further details, see the gallery website at http://hakogallery.jp/event/.

From the event announcement:

During the wars in the last century, a vast majority of women in Japan took part in making amulets to protect soldiers from bullets with thousand stitches on a piece of cloth.

This practice of “Senninbari (one thousand needles)” is hardly known today, or if it is said, it seems to burn the lips. It often faces dismissal for the accusation that it constituted women’s participation in war. It carries too much pain otherwise.

Handwork has always been part of human life. It has been handed down from one generation to another throughout the world, as a tool for living and community connections. Some handworks were born out of sorrow and war.

Handworks shape the soul of their creators. Perhaps we can find ourselves in those works and see how we are living today.

A piece of cloth can be strengthened the more stitches you add onto it.

Similarly, your hopes can can gain strength by connecting with others. Your actions will not end here. This is an endless relay of hope that continues to shift  its shape.

Handworks will resonate across generations, nationalities, ethnicities, religions and differences.

An additional event will be held at the Ogatsu O-link House community center in Ogatsu, Ishinomaki City, from May 1-9, 2015. 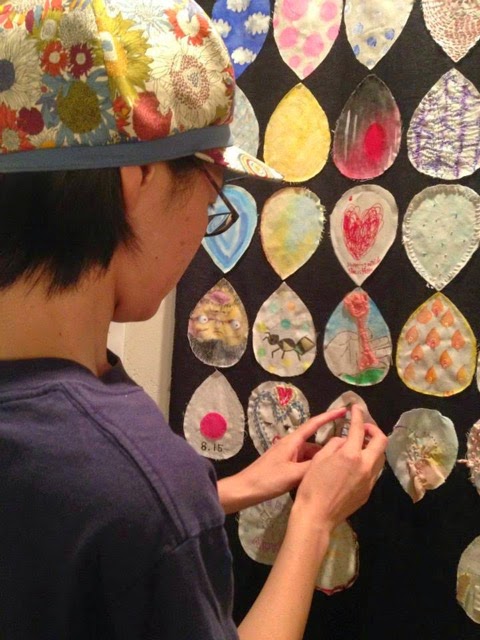 Posted by TenThousandThings at 8:04 PM
Email ThisBlogThis!Share to TwitterShare to FacebookShare to Pinterest