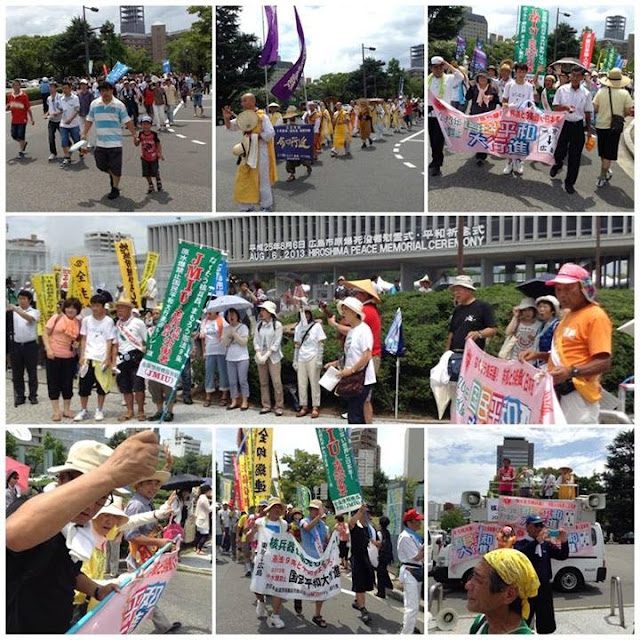 Last Day of the Peace March - Arrival in Hiroshima on August 4, 2013

This year, around 1,000 people started the march from Tokyo including Malaya Fabros, nuclear-free activist from the Philippines.

Her insightful, lively, soulful "Peace March Journal" is filled with great photos and video clips.  A wonderful introduction to Gensuikyo  (The Japan Council against Atomic and Hydrogen Bombs), the history of the Peace March, the old Tokaido Highway (Edo-era road that connects Tokyo with Kyoto), Japan's diverse local cultures of towns and regions, and some of many Japanese people who want to atone for the destruction and suffering caused by Japan during the Pacific War, maintain the Japanese Peace Constitution, and deepen efforts for a nuclear-free, war-free world:


The Peace Marchers have arrived in Hiroshima Peace Park this August 4!

The Peace March is an annual march in Japan since 1958. Every May 6 to August 4, the Peace Marchers call for peace and nuclear weapons abolition in the streets of Japan.

So What is the Peace March?

In 1958, a monk from Hiroshima decided to walk from Hiroshima all the way to Tokyo to attend the World Conference. Back then, the World Conference was usually held in Tokyo. He started alone and eventually many people joined as he passed through different cities, wards and prefectures along the way...From then on, the Peace March was held every year. There has never been a gap year. Ever.

There had been some revisions from 1958. The World Conference is now held annually at Hiroshima and Nagasaki. At present, there are several courses of the Peace March. The quite popular one is the Tokyo Hiroshima Course. There is also a course starting from up north in Hokkaido all the way to Tokyo. Another one is from Okinawa to Nagasaki...

As you can see from the schedule and the courses, the Peace March is a daily demonstration on the streets almost all over Japan to campaign for the end of nuclear weapons and for a real lasting peace around the world...From what I saw so far as today, the Peace March is a strong and creative symbol of the Japanese people’s perservering, unrelenting and patient struggle to make sure that the wrongs made from their past would not be repeated in their country and anywhere else in the world. 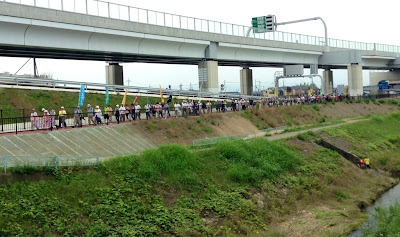 I would like to share that the Hokkaido-Tokyo Course of Prace March is currently in Fukushima...Many of its constituents still have not recovered and many of them are still in fear of exposure to radiation.

The bigger challenge is that the government is not giving the nation a real picture of the damage in Fukushima. The residents have monitored radiation levels in their areas and saw alarming results in contrast to what is actually published. The victims of radiation in Fukushima are beginning to be the new batch of hibakushas. Many members of the peace movement in Japan, especially the Hibakushas from Hiroshima and Nagasaki, are expressing their support to victims in Fukushima. This is why our popular plea in the Peace March and World Conference has been revised to this:

The deputy mayor [Toshiyuki Akahori] shared with us the several peace activities of Iwakura City... Iwakura City’s Peace Declaration was signed on 1985 and they have always been a nuclear-free zone...The city hall currently employs solar power, energy recycling, and water saving methods. 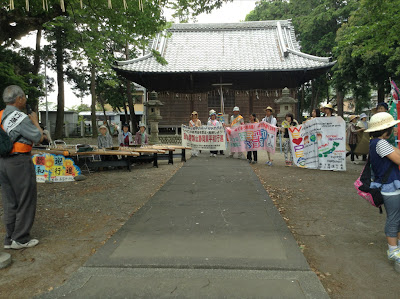 ...On July 26 1945, several days before the atomic bombing in Hiroshima, sample bombs equivalent to that of Fatman (the atomic bomb dropped in Hiroshima) were dropped by US in Shimada city...It should also be noted that carpet bombs and these test bombs sprayed over many parts of Japan also heavily devastated the nation...

...Mizuno san is a hibakusha...Despite what she has gone through from the past, she is now very healthy and active in Aichi Prefecture’s Peace Movement. She is now 90-years-old but looks way younger...

Before the party ended, Mizuno san shared her insights. She said that the Hibakushas fought very hard for.. compensation by the government...

Japan Gensuikyo launched its worldwide signature campaign several years ago to show to the world leaders and everyone that many people want a nuclear free world... From what I remember, they have collected around 2 million signatures already and are aiming for more...

Wherever you are, you can join the signature campaign by visiting the Japan Gensuikyo website: www.antiatom.org...