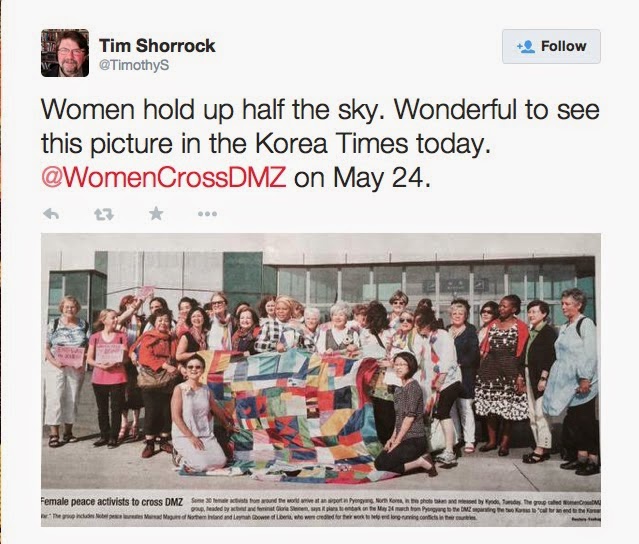 Via our friend, journalist Tim Shorrock, who traveled to Korea this week to receive an honorary citizenship of Kwangju, and to report on the Women Cross DMZ.

On May 24, 2015, Nobel Peace Laureate Mairead Maguire, Gloria Steinem, Christine Ahn, and Suzuyo Takazato, founder of Okinawa Women Act Against Military Violence, and 26 women peacemakers from around the world will walk with Korean women, north and south, to call for an end to the Korean War and for a new beginning for a reunified Korea. They will cross the 2-mile wide De-Militarized Zone (DMZ) that separates millions of Korean families as a symbolic act of peace.

Tim Shorrock, the son of missionaries, grew up in Japan. His parents were colleagues of Toyohiko Kagawa, a Presbyterian minister who was nominated for the Nobel Peace Prize for his prewar and postwar peace activism in Japan and East Asia.  Shorrock is one of the most insightful and sensitive observers of Japan, Korea, and East Asia. His cross-border upbringing has given him a wide field of vision on this history, and his perspectives are always deeply grounded in humanitarian and democratic values.

His investigative reportage exposed the US role in South Korea in 1979 and 1980 when the  Carter administration supported the South Korean military "as it moved to crush the Kwangju Uprising, the largest citizens’ rebellion in the south since the Korean War ended in 1953."


As a journalist, I’ve been intimately involved with Kwangju since the first days of the uprising. In May 1980, as a student activist at the University of Oregon, I helped distribute some of the first on-scene reports of the military atrocities in Kwangju smuggled out of South Korea by Christian human rights groups and American missionaries.

Later that decade, I was one of the only journalists to visit Kwangju and document what had happened there. And over the course of the 1990s I obtained nearly 4,000 declassified documents that repudiated the official U.S. story that American officials and generals had no involvement in the events that led up to the rebellion.

Posted by TenThousandThings at 12:20 AM
Email ThisBlogThis!Share to TwitterShare to FacebookShare to Pinterest
Labels: Korea, peace, women