Delegates from 193 countries (not including the U.S., which is not a signatory to the UN Convention on Biodiversity) committed to key goals such as curbing pollution, protecting forests and coral reefs, setting aside areas of land and water for conservation, and managing fisheries sustainably...

Hosts Japan hailed the agreement, Foreign Minister Seiji Maehara saying: "From now on, our country will contribute to the protection of biodiversity and positively support developing countries' efforts to implement the Nagoya protocol, with technologies and knowledge our country has."

Delegates and green groups also said the accord offered hope that the United Nations could help to solve the planet's many environmental problems, particularly after the failure of climate change talks in Copenhagen last year.

One of the most significant elements of the accord was a commitment to protect 17 percent of land and 10 percent of oceans so that biodiversity there could thrive.

Currently only 13 percent of land and one percent of oceans are protected...

Greenpeace International stood out among the major environment groups with a critical stance.

Greenpeace had been pushing for 20 percent of oceans to be conserved, as a step towards an eventual target of 40-percent preservation. 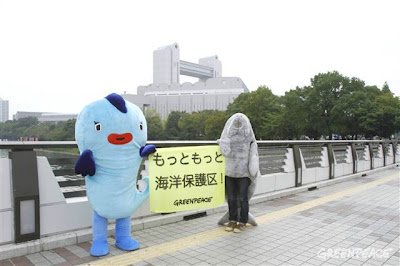 (Greenpeace urges Japanese officials to save the dugong, vulnerable marine life and their ocean habitats. A fish and dugong greet Japanese delegates as they cross a bridge on the route to the UN Convention on Biological Diversity in Nagoya, Japan. The summit venue is in the background. Photo and background story: Greenpeace)

To follow the the ups and downs of the conference we recommend articles by Japan Time journalists Eric Johnston and Setsuko Kamiya:

For over a period of two weeks, twelve Kyoto Journal volunteers, at their own expense and time, traveled to Nagoya and handed out some 800 issues of our KJ issue 75 on biodiversity to delegates, media participants and NGOs at the conference site.

KJ contributor David Kubiak described the issue as "largely a prayer to and for COP10, the UN's 10th Conference of Parties to the Convention on Biological Diversity (CBD)" See his excellent website, In Defense of Biodiversity for comprehensive, sensitive coverage of a wide range of biodiversity issues.
Posted by TenThousandThings at 8:24 AM
Email ThisBlogThis!Share to TwitterShare to FacebookShare to Pinterest
Labels: biodiversity, citizen action, ecosystems, Japan, oceans, Okinawa