"We are not right-wing, we are not left-wing~ We are Ainu": First ever Ainu political party to be launched

Saturday, October 29th, 2011 marks a revolution in Japanese politics: the first time in Japanese history a minority group has announced it will form its own political party. After witnessing the success of minority and indigenous political parties around the world, members of the Ainu community in Hokkaido decided to create their own party to campaign for their issues. 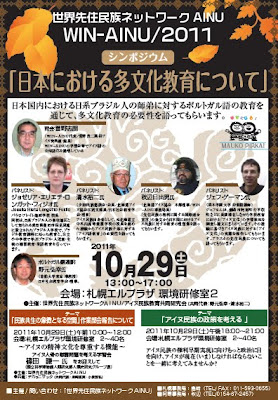 Shiro Kayano stated at the symposium:


What is needed for the Ainu people is unity. We need to unite the Ainu people and our supporters. Some people say that because we were traditionally hunters and gathers so we can not unite as one. However, we also practiced fishing and small-scale agriculture, so this argument holds no ground. We can unite.

The Ainu people have been no stranger to politics. Kayano's father, Shigeru Kayano, served as a House of Councilor's member from 1994 until 1998. While Shigeru Kayano was the only Ainu person that won a seat in parliament, other Ainu people have campaigned for seats including Kaori Tahara, a former member of the New Party Daichi.


Having Shigeru Kayano in the parliament played a huge role in the enactment of the Ainu Culture Law in 1997. I feel it may be destiny, after the passing of the United Nations Declaration on the Rights of Indigenous Peoples and us holding the 2008 Indigenous Summit in Hokkaido, that this move to form a political party has come about.

Shiro Kayano further elaborated on the necessity for Ainu people to have their own political party where their issues are not overshadowed or ignored:


Ainu issues are put on the back burner while other issues gain more attention in Japan. Many people believe that the 1997 Ainu Cultural Law and 2008 parliament resolution to recognize Ainu as indigenous people solved the issues that Ainu people have faced, but in reality, they have not not. So, we need to rise up! Similar to the Arab Spring, maybe this marks the beginning of an Ainu Spring!

A member of the Planning Committee for the Ainu Party who wished to remain nameless explained that current governmental policies, laws, and panels on Ainu policy do not take adequate steps to realize any of the inherent indigenous rights to which the Ainu are entitled, nor any other priorities that Ainu have, including issues related to poverty and education. He also noted:


We hope that with an Ainu political party, not only can we push for policies that realize Ainu rights, but we can draw attention to the multicultural nature of Japan while pushing for policies that address a variety of Ainu issues.

Hiroyuki Nomoto, Tokyo Metropolitan University associate professor and member of the Planning Committee for the Ainu Party explained that although the policy stances of the party have not been decided, discussions have revolved around the following points:
The Ainu Party which is aiming to bring at least ten candidates to parliament in 2013, will help bring Ainu issues to the forefront of Japanese policy deliberations. It may also provide a platform for other minority groups, such as Zainichi Koreans in Japan to raise their voices against violations of their rights. Currently, Zaiinichi Korean organizations are campaigning for their schools to become accredited by the government. At present, with "international" English schools as an exception, any school that does not use Japanese as its main language cannot become accredited, forcing its students to jump through countless hurdles to matriculate into universities.

The idea behind the Ainu party is for Ainu people to unite to promote their own issues, while taking steps towards a multicultural Japan where all minorities can live in harmony. As Hideo Akibe explained: "We are not right-wing, we are not left-wing~ We are Ainu."

Thanks for providing the details from the symposium!

Anytime! If there is ever anything that you would like us to share information about, please get in touch! -Jen

In case you haven't heard, the Ainu Party has launched a website (also in English!):