Japan Meteorological Agency: Half of radioactive materials from Fukushima fell into sea

A division of the Japan Meteorological Agency announced that up to 80 percent of the radioactive contamination from the 3/11 Fukushima nuclear power plant disaster fell into the ocean, but the remaining airborne material circled the planet on jet stream winds. The Meteorological Research Institute said its computer simulations calculated that radioactive materials, including cesium-137, were blown northeastward from 3/11 toward Siberia and Alaska before mostly falling into the Pacific.

Kyodo via The Mainichi Daily News: 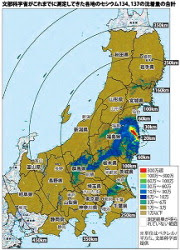 A screen capture of a map released on Nov. 11 by the Ministry of Education, Culture, Sports, Science and Technology displaying accumulated radioactive cesium levels in eastern Japan. (Image: Mainichi)

Half of radioactive materials from Fukushima fell into sea: study

TOKYO (Kyodo) -- More than half of the radioactive materials that were emitted into the atmosphere in the days after the Fukushima nuclear disaster have since fallen into the ocean, according to a recent simulation by a team of researchers.

Between 70 and 80 percent of the radioactive cesium from the Fukushima Daiichi power plant in Fukushima Prefecture had fallen into the sea by April, with the rest having fallen on land, according to the simulation done by the Meteorological Research Institute in Tsukuba, Ibaraki Prefecture, and other researchers.

"The Fukushima nuclear power plant is located on the eastern edge of Japan, so only small amounts ended up falling on land because (such materials) get carried by the westerlies between March and April," said Yasumichi Tanaka, a senior researcher at the Japan Meteorological Agency institute and a member of the research team. However, it suggests the fallout that did not make landfall polluted the ocean, he added.

A simulation model applied in the study was developed by the institute and the agency, and was used to see how such radioactive isotopes as cesium-131, cesium-134 and cesium-137 got dispersed in the days after the disaster triggered by the March 11 earthquake and tsunami.

On the premise that the materials were dispersed with each particle being the size of less than 1 micrometer, the simulation showed they largely completed a trip around the globe in roughly 10 days after first crossing the Pacific.

Once released into the atmosphere, the materials were dispersed mostly northbound and reached the western coast of the mainland United States around March 17 after passing through eastern Russia and Alaska, according to the simulation. They are likely to have largely completed a round-the Earth trip around March 24.

Most of the radioactive materials fell with rain as they got carried through the atmosphere, the study showed, saying that about 65 percent of the cesium-131 released into the air in the disaster has since fallen into the sea.

The results of the study will be presented to an academic meeting in Nagoya that began Wednesday.
Posted by TenThousandThings at 12:01 AM
Email ThisBlogThis!Share to TwitterShare to FacebookShare to Pinterest
Labels: Fukushima, Japan, nuclear radiation