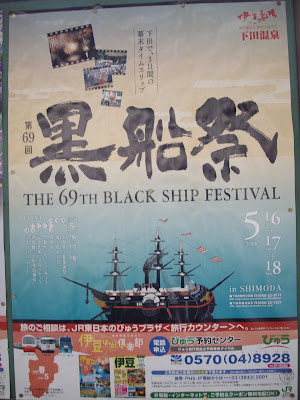 Poster for the 2008 Black Ship Festival at Shimoda.
Locals did not appear enthusiastic about the commemorative event.

On both sides of the Pacific, family farmers, small and medium-size business owners, environmentalists, labor unionists, and traditionalists who want to conserve what remains of respective national sovereignty and local culture in the U.S. and Japan are voicing opposition to the Trans-Pacific Partnership (TPP) "Free Trade" Agreement.

A recent Mainichi article about organic farmer and poet Kanji Hoshi echoes the thoughts of many traditional Americans as well as traditional Japanese people:


Hoshi is the author of an essay called "Sonno joi no shiso: han TPP no chiiki ron" ("The philosophy of revere agriculture, expel the barbarians: anti-TPP localism"), published in May 2011 in the book, Takahata-gaku (Takahataology).

In it, he writes: "I would like the philosophy of revering agriculture and expelling the barbarians to be the stronghold against the black ships of TPP," Hoshi writes. "We need to give primary importance to agriculture for its production of food for life, and to justly appreciate its function of protecting the environment. If we destroy our beautiful homeland, we will not be able to face our descendents. 'Expel the barbarians' refers to the elimination of our disposable consumer civilization. We need to possess a set of values necessary to live simply and spiritually rich in a mature society, and let us attempt self realization."

Hoshi's philosophy mirrors the "Back to the Land" movement that began in the U.S. in the 1960's and 1970's when Americans began a renewal of traditional regional rural cultures.

A parallel movement gathered steam in Japan during the 1990's, after the bursting of the economic bubble was followed by a "hollowing out" of Japan's industry and "corporate restructuring" (fueled by foreign takeovers of Japanese corporations). These neoliberal changes ended the prospect of permanent and lifetime employment for many young people in Japan who might have otherwise followed their parents' footsteps into the corporate or manufacturing worlds. Koji Nakano’s The Philosophy of Noble Poverty became a Japanese best-seller in 1992. Like their American counterparts, Japanese neo-traditionalists joined an already thriving local farming counter-movement. Many Tokyo-dwellers, disenchanted by or ejected from the neoliberal rat race, moved back to their ancestral rural hometowns.

In both the U.S. and Japan, these Back to the Land and Slow Food/Slow Life pioneers value organic and natural farming, renewable energy sources, quality of life and simplicity. Paul Gruchow's The Necessity of Empty Places elegiac exploration of American rural life before corporate agribusiness and chain stores invaded traditional landscapes epitomizes the American quest to renew local heritage.

Americans and Japanese opposing the TPP are the 99% who are actually conservatives. They want to conserve their economic and social systems as they are and renew what has been lost because of past American and Japanese unsustainable obsession with economic competition and growth—that unduly benefited the 1%. Americans and Japanese opposing the TPP want to save their jobs, their farms, their environment, their ways of life from the radical neoliberal shifts that the "free trade" agreement would bring. Because the deceptive nature about the ostensible benefits of past "free trade" deals have been revealed over time, American and Japanese people know that TPP "free trade" changes would only benefit financiers, corporate agribusiness (factory farms and plantations), some global corporations, and law firms representing these interests.

Who needs or wants cheaper (and shoddier) consumer products made by exploited workers (or quasi-slave laborers in Vietnam and Burma)? Who wants the loss of domestic jobs, delicious locally grown heirlom fruits and vegetables and authentic (from the grassroots up) culture? Who wants the loss of democratically created regulations protecting what's left of our planet, and democratically created labor standards protecting what's left of our human dignity? Who wants the continued erosion of constitutionally guaranteed rights and liberties in places where they're still extant?

Good political analysis (as always) on TPP at Shisaku and sensitive insights (as always) from a food sovereignty perspective at Kurashi. Here are some more articles from September on the American 99% view towards the TPP:

"Unions and Farmers—Plus Ben and Jerry—Unite Against Trans-Pacific Trade Deal":


...After the failure of post-NAFTA negotiations by the Clinton administration to create new trading blocs for Asia and the Pacific and for the Americas, the Bush administration attempted to expand both the geographic and policy scope of an emerging Asian-Pacific partnership. For now it includes the US, Australia, New Zealand, Peru, Chile, Vietnam, Malaysia, Brunei and Singapore, but it could be designed to add more countries in the future, even China.

Obama, who had campaigned for a new style of trade agreement, delayed action on the Bush-proposed talks, but by late 2009 he embraced the project and the old paradigm. Although the new text is not publicly available (even though corporate trade lawyers get access), critics—who have surreptitiously seen parts of the text—say it largely follows the NAFTA, corporate-rights model.

But it seems that the Trans-Pacific Free Trade Agreement not only is running into broad-based opposition, including from many businesses without Ben & Jerry’s high-profile social consciousness as well as unions, environmentalists and many other progressive groups. It also faces numerous internal conflicts and contradictions, argues Public Citizen Global Trade Watch director Lori Wallach...


...The provisions of the Trans-Pacific Free Trade Agreement or Trans-Pacific Partnership (TPP) are still under wraps. But the general outline seems to mimic the North American Free Trade Agreement (NAFTA) and similar pacts that have brought political and economic turmoil to rich and poor countries alike. The new negotiations are also taking place amid political friction over pending trade deals with South Korea and Colombia, which have run into opposition over concerns about labor abuses abroad and offshoring of U.S. jobs. Yet the White House continues to push free trade as a path toward the country’s economic revitalization...

Manuel Perez-Rocha, an analyst with the D.C.-based think tank Institute for Policy Studies, says that free trade deals tend to use “investment” and “growth” as a pretext for ruthless exploitation. The agreements “push wages lower and dislocate production with the ensuing loss of jobs,” says Perez-Rocha, adding that “the prospects for the TPP are very bleak and workers everywhere must resist it."