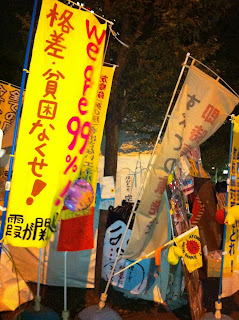 Eight months have passed since the disaster of March 11th, since which time I have been riding the same emotional see-saw as many others after emerging from the cocoon of fear and shock that ruled the initial days and weeks following the outbreak of the nuclear crisis. When facing the choice, however, of engaging my critical mind or succumbing to the more comfortable state of mind that most others here seem to have clearly chosen—blissful denial—I seem to find myself on most days choosing the latter.

With the exception of occasionally attending and writing about Japan’s steadily growing anti-nuclear movement, I have by-and-large opted to focus upon my everyday life and personal concerns. For some living in Fukushima, however, no such escape option exists. Every day is filled with uncertainties and questions with regard to matters of basic survival: What food is safe to eat? Can I drink this water? Is it is safe to send the kids outside to play?

Outraged at being forced into this situation, a group of Fukushima women decided to take things to the next level by holding a sit-in last week in front of the Ministry of Economy. Organized by members of NGOs and ordinary citizens, the first leg of the sit-in from October 27-30 was attended exclusively by women from Fukushima, then followed by a week-long solidarity sit-in action until November 5th for anyone else who wished to offer their support.

With the national and prefectural governments continuing to add insult to injury following the 3.11 triple disaster by making one outrageously irresponsible decision after the next, there is plenty to be indignant about: Stopping citizens from attempting their own radiation measurements, radioactive dumping in Tokyo Bay, feeding Fukushima schoolchildren with quite possibly contaminated food, and releasing negligent information regarding radiation figures, for starters.

I visited the sit-in the end of the final week, after darkness had fallen. Around 30 or 40 women (and a few men) were in attendance—a small number compared to the hundreds who were normally there during the daytime, I was told. Speaking with the woman staffing the registration tent, I could barely hear our exchange because of trucks parked nearby with a loudspeaker blaring the same message over and over again: “How dare you women come here and protest without identifying yourself! Each and every one of you should put your face and name on the Internet. What kind of cowards are you?” Unreal. 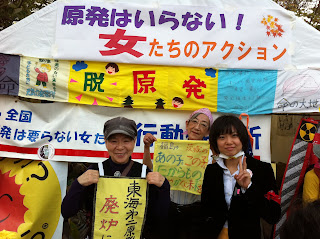 
“Typical men!” commented the woman I was speaking with, referring to the voice behind the loudspeaker, as I turned to make my way to those assembled for the sit-in. Trying my best to ignore the loud distraction (and to quiet my own anger at those causing it), I sat down with the women and began listening to the speaker addressing the group. Born and raised in Fukushima but living in Ibaraki at the time of the 3.11 disaster, long-time anti-nuclear activist Yuko Yatabe was propelled by shock to travel to Chernobyl following what had happened in her home prefecture. There, she met with citizens in order to discuss the lessons that might be learned for those in Fukushima now facing similar anxieties. 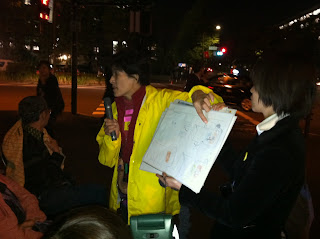 Yatabe showing artwork drawn by a child from Chernobyl


In response to Yatabe’s presentation, one woman raised her hand and commented about the need for Fukushima citizens to become self-empowered with regard to their own health. I approached her as the group was dispersing to ask her what she meant. I learned that she was named Ms. Shirai, and that she ran a grassroots network for alternative energies. “If people in Fukushima are fearful and depressed, their immune systems will be compromised, and they will be at an increased risk for succumbing to the negative effects of radiation,” she told me in an extremely animated voice. “I am trying to reach as many people as I can with the message that there are things they can do to increase their chances of staying healthy, such as waking up early and absorbing positive energy from the sun, or thoroughly cleaning their food in order to reduce possible radiation consumption.” 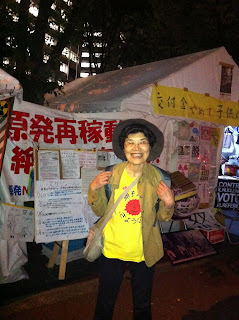 Shirai, who aims to help empower Fukushima citizens to take charge of their own health


I returned to the sit-in several days later during the afternoon, when one or two hundred participants were in attendance. I was delighted to meet Ruiko Muto, a Fukushima woman whose moving speech during the September anti-nuclear action in Shinjuku had gone viral (at least in Japanese circles) and had inspired me greatly. “While men may try and approach the world intellectually, we women feel things—particularly the power of life itself,” she told me. “And I believe that there is nothing wrong with approaching activism from this emotional perspective.” 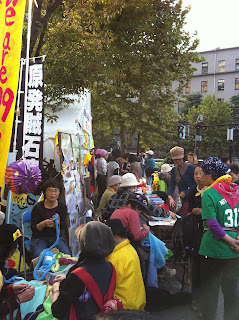 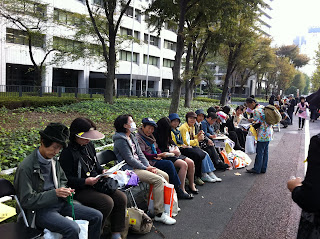 “This may appear to be Fukushima’s problem, but as a matter of fact, it will very soon be Tokyo’s problem, as well as that of other Japanese cities,” said another woman, Setsuko Kuroda, who had also traveled from Fukushima for the sit-in. “For this reason, we must all begin working together and cooperating.”

I also ran into Yuko Yatabe again, and was thrilled to see that she was together with a small group of women including Yukie Tokura from the STOP! Hamaoka Nuclear Power Plant movement and performance artist/activist Rena Masuyama who were on their way to deliver a petition to the Diet demanding that Japan cancel a plan to export contaminated food from Fukushima. Thanks go to Shingetsu News for filming the meeting:


Perhaps the most egregious of all (in)actions—the failure to protect children—is now the subject of a worldwide petition from Avaaz that is still collecting signatures. The petition’s website (which was updated November 11th) reads:

Right now, thousands of local residents are still trapped in the highly contaminated areas in and around Fukushima City. With black rain falling from the sky and local crops poisoned, children in families left destitute by the tsunami can’t afford to get out — and the government is failing to help them.

But a group of brave mothers have taken to the streets to ensure their children are helped out of the disaster zone. Hundreds of supporters from around the country have gathered for a sit-in outside the Ministry of Economy in Tokyo demanding that Prime Minister Noda grant their children the opportunity to evacuate. We can stand with them.

This is, literally, the fight of their lives. Children, sitting in the midst of radioactive contamination, don’t have a day to lose. In hours, the government will decide whether to act at an emergency meeting -- let's build a giant outcry for a healthy future for Fukushima children. Sign the urgent petition on the right and forward this campaign widely -- it will be delivered directly to the Prime Minister's office before the meeting.

This blog article from Greenpeace gives beautiful insight into the hopeful aspects of the Fukushima women’s protest, and Tokyo area blogger Ruthie Iida gives a thought-provoking account of her visit to the sit-in on her website, Kanagawa Notebook. Finally, British-born, Paris-based Japanologist Kevin Dodd gives a nuanced account about the post-3.11 culture of silence surrounding nuclear issues (which I also referenced above) on his website Senrinomichi.

As I was leaving the sit-in during my second visit, one woman approached me to say that she had been extremely inspired by the Occupy Wall Street movement, and the way that it had taken off globally after being motivated by the Arab Spring and similar demonstrations in Europe. “These protests have their roots in the very same problems as do the nuclear issue in Japan,” she told me pointedly. “The nuclear industry are the 1%, while the rest of us are the 99%. If we want to solve these problems, it is critical that people from around the world continue working together in solidarity.” 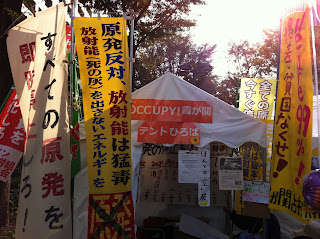 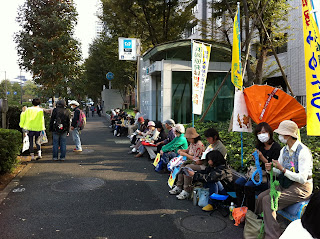 Other women in the world see the strength of these Japanese women. Trying to get them to stop and drown them out with a loud speaker did not work. I heard these women all the way in the USA!!! Where are the Fukushima Fathers? They should protest next.

Great reporting and interesting question from Anonymous about Fukushima fathers. I wish someone who knows the answer could address that.

Thanks to both of you...I will let the Fukushima women know of your support, which I know will be a source of strength for them. And I agree...hope to hear from the Fukushima Fathers as well!! Will post if I can find anything on this...

Many thanks again! KH

Many thanks Kim for a beautiful and powerful report on the Fukushima Mothers' Movement from the grassroots.

In defense of Fukushima Fathers...I hope they still have jobs and are recovering from the massive and ongoing collective trauma that hits them in the face very morning when they wake up. I think it's easier for non-working women, women with adult-age children, or childless women to take up activism...

Social movements in Japan (and actually worldwide) tend to be dominated by women. Many are middle-aged or older. It's an interesting phenomenon and I don't know the reason for it, except for the reasons above.

Many thanks, in solidarity and love always to all in Fukushima, Tohoku, and Japan,