Wikileaks: Tokyo Rejected Suggestion of Obama visit to Hiroshima in 2009 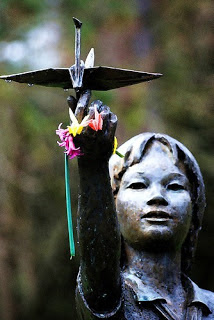 Thanks to Chelsea Manning and Wikileaks, we know Tokyo nixed the suggestion of a presidential visit to Hiroshima in 2009.

This was a year of heightened hope after Obama's April 5 "Prague Speech" (in which the US president called for a world free of nuclear weapons).  Hibakusha and their supporters campaigned for an Obama visit to Hiroshima — to spark the nuclear abolition movement.  However, some in Tokyo wanted to dampen "expectations":


VFM [Vice Minister for Foreign Affairs] Yabunaka pointed out that the Japanese public  will have high expectations toward President Obama's visit to  Japan in November, as the President enjoys an historic level  of popularity among the Japanese people.  Anti-nuclear groups, in particular, will speculate whether the President  would visit Hiroshima in light of his April 5 Prague speech  on non-proliferation.  He underscored, however, that both governments must temper the public's expectations on such issues, as the idea of President Obama visiting Hiroshima to apologize for the atomic bombing during World War II is a "non-starter."