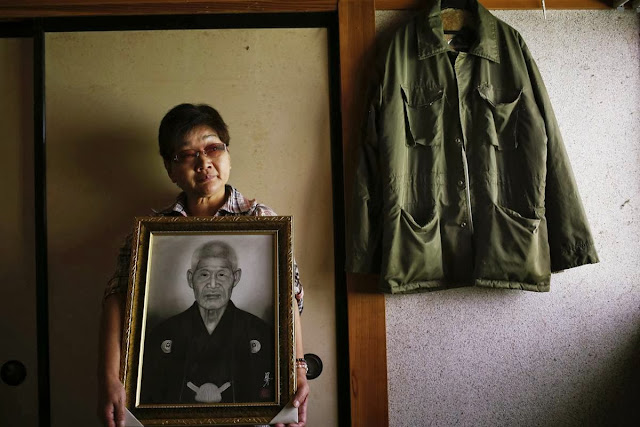 Mieko Okubo poses with a portrait of her father-in-law Fumio Okubo in the room where he committed suicide. His old jacket hangs on the wall. Fumio, a 102-year-old farmer, hanged himself in the house where he had lived for all of his life after authorities ordered the town of Iitate be evacuated following the nuclear disaster at the tsunami-crippled Fukushima Daiichi power plant.

Mieko, who lives outside the exclusion zone, comes back every other day to feed Fumio's dog and clean the house. She says he committed suicide because he could not stand the idea of ending his life anywhere else.

NYT's Martin Fackler's report on 83,000 nuclear refugees (from the 20-km exclusion zone)  around Fukushima Daiichi , takes the reader through the evacuated town of Namie. The Japanese government says these towns will be decontaminated enough by 2017 to allow the return of former residents, but many are skeptical:


Two and a half years after the plant belched plumes of radioactive materials over northeast Japan, the almost 83,000 nuclear refugees evacuated from the worst-hit areas are still unable to go home. Some have moved on, reluctantly, but tens of thousands remain in a legal and emotional limbo while the government holds out hope that they can one day return.

As they wait, many are growing bitter. Most have supported the official goal of decontaminating the towns so that people can return to homes that some families inhabited for generations. Now they suspect the government knows that the unprecedented cleanup will take years, if not decades longer than promised, as a growing chorus of independent experts have warned, but will not admit it for fear of dooming plans to restart Japan’s other nuclear plants.

That has left the people of Namie and many of the 10 other evacuated towns with few good choices. They can continue to live in cramped temporary housing and collect relatively meager monthly compensation from the government. Or they can try to build a new life elsewhere, a near impossibility for many unless the government admits defeat and fully compensates them for their lost homes and livelihoods.

“The national government orders us to go back, but then orders us to just wait and wait,” said Tamotsu Baba, the mayor of this town of 20,000 people that was hastily evacuated when explosions began to rock the plant. “The bureaucrats want to avoid taking responsibility for everything that has happened, and we commoners pay the price.”

Fukushima evacuation zone in April 2011.
83,000 nuclear refugees were evacuated from the 20-km exclusion zone.
At present, the entire nuclear refugee population is over 160,000.
(Image: Wikipedia)
Posted by TenThousandThings at 12:46 PM
Email ThisBlogThis!Share to TwitterShare to FacebookShare to Pinterest
Labels: 3/11, Fukushima, Japan, Nuclear-Free, Tohoku