Organic tea farmer Ayumi Kinezuka on protecting Japan's rich family farm culture, food safety, and the need for reconnection—with each other, with land and nature...

Ayumi Kinezuka, after getting degrees in psychology and sociology at the University of California (Berkeley). returned home 10 years ago, to help carry on her family's organic tea farm near Fujieda, Shizuoka.

Her father, Toshiaki Kinezuka, is one of the pioneers of the global organic farming movement:  Thirty-seven years ago, he shifted his 2 hectare (5-acre) tea and orange farm to organic and founded a group with several tea growers that became Hito to No, Shizen wo Tsunagu Kai (Connecting People, Agriculture, and Nature). Their organic green and black teas are popular worldwide among tea enthusiasts.

In 2011, after they were hit (as was most of Japan) with fallout from the Fukushima meltdowns, the Kinezukas decided, at great financial loss, to destroy their entire crop from that year, even though the radiation readings of their tea were far below the Japanese government's safety standard.  The reason: as organic farmers, food safety is their integral to their ethos and they felt responsible to maintain their high standard of purity to protect their customers.

They are now continuing to recover from the accident, while strengthening organic food culture in many ways:  hosting WOOLF interns; deepening relationships with their consumers and other farmers, and welcoming urban dwellers in need of reconnecting with nature.

This is an inspirational family and community -- on every level.  The Kinezukas and their farming cooperative keep in contact with their customers and sell directly to them at their website, (naturalitea.com/), a trove of info on tea and the rich traditional Japanese way of life (reverencing nature, farming, food, relationships, and community).


In the second -part (5-min) of a 3-part series of video interviews,
Ayumi Kinezuka relates why she became a farmer:
it is a field in which she can help connect people with each other and with nature

In the  final short video, she talks about miso-making, and rice-growing with friends (non-farmers who visit the Kinezuka farm during rice-planting, weeding, and harvesting seasons to enjoy connecting with the earth, others, and eating fresh, organic local foods).  She brings her social psychological and outreach skills to creating and deepening awareness, connections in all that she does.

Also in two (10- and 15-min.) videos at the same webpage, Toshiaki Kinezuka shares his story of why and how he became an organic farmer.

The above videos were made in January, 2011, during a peak  the Japanese organic farming movement, which had been developing steadily since the 1970's.  The multiple meltdowns at Fukushima Daiichi Nuclear Power Plant have hit farmers throughout Japan (not just in Fukushima) hard, especially organic farmers like the Kinezukas.

In this Women Rising radio interview (her interview begins at 20:30 of the tape), Ayumi Kinezuka describes her organic philosophy and how her family and their organic tea cooperative decided, at great financial loss, to destroy their entire 2011 crop  to protect the food safety of their customers.

I'm living in the community, hoping to protecting the rich culture we've inherited...There are not many young farmers...So when I came back ten years ago, one of the things I thought was very important was to have a network of young farmers because, first we need to share an understanding of our current situation...When I attended the youth meeting of Nouminren, I met a lot of young people and they are facing the same challenges.  As I talked to them, it was very inspiring, so I suggested to La Via Campesina to organize the youth...  Since 2008, we have started a regional youth gathering...

I think farming is not just the production of food. To produce the food is more like an expression of our own ideology or our own beliefs. So participating in La Via Campesina meetings and Nouminren meetings, I'm receiving a lot of information and education about how to perceive the world, how to perceive the current agricultural system, and so on. It's given me a lot of inspiration in that way...

I live in Shizuoka Prefecture, which is west of Tokyo, close to Mount Fuji. From the Fukushima nuclear power plant, it's about 400 km (260 miles) away.  I never imagined our farm would be affected when the accident happened. So after we harvested the tea, we sent our tea samples for testing and we found 350 becquerels of cesium in our tea. At the end of the second harvest season, after June, we found 150 becquerels. And the last harvest in October, there was 76 becquerels. Even though the government regulation at that time was 500 becquerels, and according to them, since it's below the regulation level, they say it's safe.

But as an organic farmer, we have never used any chemicals, herbicides, pesticides, or chemical fertilizers in our fields to ensure the safety of our tea and food, and also to protect the environment. It was a very difficult time for us. We did not know how to understand this reality that our tea was contaminated.

So, collectively, since we're a group of organic tea farmers, we discussed and decided we were going to destroy all the tea we produced that year. All together, we destroyed more than 20 tons of tea that was produced in 2011.  Since then, we've been testing the tea at least three times a year to make it obvious to the consumer the truth about the tea.

We are very upset at what happened because we have been working so hard to build a community of organic farming, and at the same time, we've been working very hard to build very good relationships with consumers and producers. But all of a sudden, without our control, this accident put radioactivity into our tea. What's scary about radioactivity is that you can't see it, feel it, taste it, smell it, but it's still there. The accident contaminated our soil, air, water, and also all the plants, and, of course, our bodies too. We have to be very clear that we can't co-exist with this dangerous generation of power.

Now many people in Japan are living in cities so they are detached from nature. Even though human beings are part of nature, we forget that, and that is driving people crazy. So organic farming has the responsibility of connecting people back with nature. It is very nice when people come to my farm and they have a very beautiful smile on their face, and their eyes are just bright. That really tells us what is really essential for us to live as a human being. It's not just money, goods, iPhones, and computers. So I want to provide, as an organic farmer, not just safe food, but an opportunity for people to come back to nature and feel for themselves what it is like to be alive. 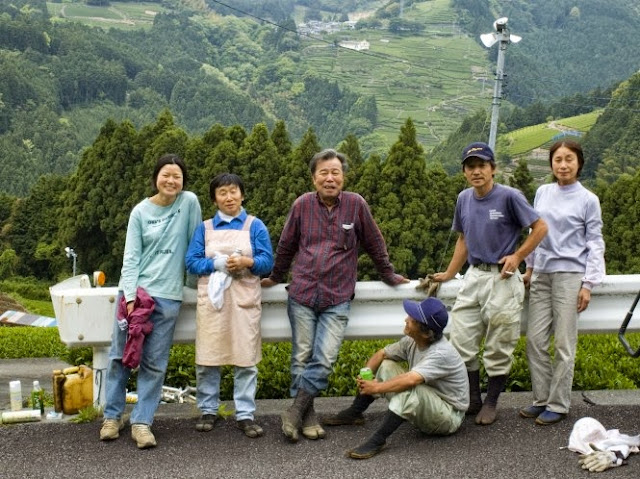 The Kinekuza Family taking a break.
(via Samovar Life: photo and (great blog post on the Kinezuka tea festival))