"Plummeting morale at Fukushima Daiichi as nuclear cleanup takes its toll: Staff on the frontline of operation plagued by health problems and fearful about the future, insiders say," by Justin McCurry at The Guardian: 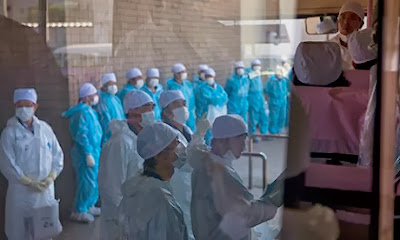 Tepco employees wait for a bus at J Village, a soccer training complex
now serving as an operation base for those battling Japan's nuclear disaster.
(Photograph: Reuters via The Guardian)

...Even now, at the start of a decommissioning operation that is expected to last 40 years, the plant faces a shortage of workers qualified to manage the dangerous work that lies ahead.

The hazards faced by the nearly 900 employees of Tokyo Electric Power [Tepco] and about 5,000 workers hired by a network of contractors and sub-contractors were underlined this month when six men were doused with contaminated water at a desalination facility...

...the head of Japan's Nuclear Regulation Authority (NRA), Shunichi Tanaka, told reporters, "Mistakes are often linked to morale. People usually don't make silly, careless mistakes when they're motivated and working in a positive environment. The lack of it, I think, may be related to the recent problems."

...70% of Tepco workers at Fukushima Daiichi who were also forced to evacuate their homes by the meltdown. They have yet to come to terms with that loss and many live away from their families in makeshift accommodation near the plant.

"They were traumatized by the tsunami and the reactor explosions and had no idea how much they had been irradiated," Shigemura said. "That was the acute effect but now they are suffering from the chronic effects, such as depression, loss of motivation and issues with alcohol."

..."Tepco is spending its money on fixing the technical problems, but it also needs people to carry out that work. I'm very worried about the labour shortage. If they don't do something about it soon, the employment system at Fukushima Daiichi will collapse first, not the plant."

...as concern grows over Tepco's ability to address the myriad technical challenges facing Fukushima Daiichi – starting next month with the removal of 1,300 spent fuel assemblies from the top of reactor No 4 – the unfolding human crisis is being largely ignored.

Another eye-opening report on the human costs of the Fukushima clean-up attempt, "Help wanted in Fukushima: low pay, high risks and gangsters," via Reuters:


In reviewing Fukushima working conditions, Reuters interviewed more than 80 workers, employers and officials involved in the unprecedented nuclear clean-up. A common complaint: the project's dependence on a sprawling and little scrutinised network of subcontractors - many of them inexperienced with nuclear work and some of them, police say, have ties to organised crime...

Dismantling the Fukushima Daiichi plant will require maintaining a job pool of at least 12,000 workers just through 2015, according to Tepco's blueprint. That compares to just over 8,000 registered workers now. In recent months, some 6,000 have been working inside the plant.

The Tepco hiring estimate does not include the manpower required for the government's new $330 million plan to build a massive ice wall around the plant to keep radiated water from leaking into the sea...

Japan's nuclear industry has relied on cheap labour since the first plants, including Fukushima, opened in the 1970s. For years, the industry has rounded up itinerant workers known as "nuclear gypsies" from the Sanya neighbourhood of Tokyo and Kamagasaki in Osaka, areas known for large numbers of homeless men.

The Fukushima project has magnified those problems. When Japan's parliament approved a bill to fund decontamination work in August 2011, the law did not apply existing rules regulating the construction industry. As a result, contractors working on decontamination have not been required to disclose information on management or undergo any screening.

That meant anyone could become a nuclear contractor overnight. Many small companies without experience rushed to bid for contracts and then often turned to brokers to round up the manpower, according to employers and workers...

Hundreds of small companies have been given contracts for this decontamination work. Nearly 70 percent of those surveyed in the first half of 2013 had broken labour regulations, according to a labour ministry report in July. The ministry's Fukushima office had received 567 complaints related to working conditions in the decontamination effort in the year to March. It issued 10 warnings. No firm was penalised...

"Major contractors that run this system think that workers will always be afraid to talk because they are scared to lose their jobs," said Hayashi. "But Japan can't continue to ignore this problem forever."


In the titanic struggle to bring to closure the dangerous situation at Fukushima Nuclear Plant No1, there are many signs that TEPCO is facing great difficulties in finding workers. At present, there are nearly 700 people at the site. As in ordinary times, workers rotate so as to limit the cumulative dose of radiation inherent in maintenance and cleanup work at the nuclear site...

But this time, the risks are greater, and the method of recruitment unusual.
Job offers come not from TEPCO but from Mizukami Kogyo, a company whose business is construction and cleaning maintenance. The description indicates only that the work is at a nuclear plant in Fukushima Prefecture. The job is specified as 3 hours per day at an hourly wage of 10,000 yen. There is no information about danger, only the suggestion to ask the employer for further details on food, lodging, transportation and insurance.

Those who answer these offers may have little awareness of the dangers and they are likely to have few other job opportunities. $122 an hour is hardly a king’s ransom given the risk of cancer from high radiation levels.  But TEPCO and NISA keep diffusing their usual propaganda to minimize the radiation risks.

Rumor has it that many of the cleanup workers are burakumin. This cannot be verified, but it would be congruent with the logic of the nuclear industry and the difficult job situation of day laborers. Because of ostracism, some burakumin are also involved with yakuza. Therefore, it would not be surprising that yakuza-burakumin recruit other burakumin to go to Fukushima. Yakuza are active in recruiting day laborers of the yoseba: Sanya in Tokyo, Kotobukicho in Yokohama, and Kamagasaki in Osaka. People who live in precarious conditions are then exposed to high levels of radiation, doing the most dirty and dangerous jobs in the nuclear plants, then are sent back to the yoseba. Those who fall ill will not even appear in the statistics.


Many prefer to turn a blind eye as it is reassuring to believe TEPCO’s nonsense and the nostrums provided by scholars associated with the nuclear lobby. But there is also a growing awareness of the problem, which can be observed for example through the vast mobilization in the region of Fukushima and Tokyo among citizens and on the Internet...

Temporary subcontract workers who have never entered a nuclear plant before probably have a very vague perception of these risks.


Paul Jobin, "The Roadmap for Fukushima Daiichi and the Sacrifice of Japan's Clean-up Workers 福島第一原発のロードマップと除染作業員" (July 15, 2013):


Public bids are now almost entirely controlled by the construction companies at the top (moto uke) and the yakuza at the bottom;

Wage skimming is the norm and many workers only get a tiny portion—if any—of the 10,000 Yen hazard allowance;