At a school in the non-nuclear country of New Zealand, Waitakere Mayor Bob Harvey is lighting the Abolition Flame with fire taken from the Peace Flame at the Hiroshima Peace Park. The Hiroshima Peace Flame was lit from the embers of the 1945 nuclear explosion in memory of those who perished and will remain alight until all nuclear weapons are eliminated.

Mayor Harvey's visit to Japan coincided with the annual assembly of Mayors for Peace, an international movement of 3,104 cities calling for the elimination of nuclear weapons. Mayor Harvey explains the significance of location of the ceremony is to bring the message of peace to youth:


“The flame is a message about what kind of world we want these children to inherit…our homes, neighbourhoods and schools are responsible for passing on a peaceful culture.” 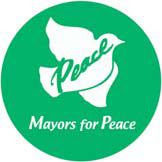 On Oct. 2 (the anniversary of Mahatma Gandhi's birth and the UN Day for Peace and Nonviolence), World March for Peace and Nonviolence marchers starting at the Gandhi statue in Wellington, New Zealand will take the Abolition Flame around the world before reaching New York for the 2010 Review Conference of the Non-Proliferation Treaty (signed by most countries in the world; includes an obligation to achieve nuclear disarmament). 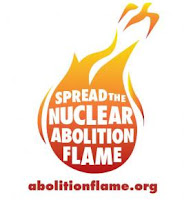 The World March for Peace is the first of its kind--a transnational march for the end of nuclear weapons and all forms (economic, racial, religious, sexual, psychological) of violence. It will continue for 90 days and span 90 countries, ending in the Andes Moutains on January 2, 2010. A permanent base of a hundred people of different nationalities--joined by others throughout the world––as the march passes through their locality, will complete the journey.

Sato Makiko is in charge of the Japan leg (Oct 17-19) of the march which will touch down in Hiroshima, Kyoto, and Tokyo. Makiko said she's still finalizing plans and welcomes all interested participants and supporters. So far, Mayors for Peace, Peace Boat, the International Campaign to Ban Uraniun Weapons, HANWA (Hiroshima Alliance for Nuclear Weapons Abolition) and Peace Not War Japan have joined. For additional information (in Japanese): http://www.anatakara.com/petition/index2.html. We'll also post the latest at this site in English.

More background from the Organizers:

Because we can end world hunger with 10% of what is spent on arms. Imagine how life would be if 30-50% of the arms budget went toward improving people’s lives instead of being used for destruction.

Because eliminating wars and violence means leaving human pre-history behind and taking a giant step forward in the evolution of our species.

Because in this aspiration we are accompanied by the strength of the voices of hundreds of prior generations who suffered the consequences of war, and whose echo continues to be heard today in all those places where it continues to leave its sinister trail of dead, disappeared, disabled, refugees and displaced.

Because a “world without wars” is an image that opens the future and seeks to become reality in every corner of the planet, as violence gives way to dialogue.

The moment has come for the voiceless to be heard! Out of agonizing and urgent need, millions of human beings are crying out for an end to wars and violence.

We can make that happen by uniting all the forces of pacifism and active non-violence worldwide.

The March was initiated by “World Without Wars”- an international organization launched by the Humanist Movement - that has been working for 15 years in the fields of pacifism and non-violence.

The World March, however, will be created and shaped by everyone. Open to any person, organization, collective, group, political party, business, etc., that shares the same aspirations and sensibility, this project is not something closed. Instead, it is a journey that will be progressively enriched as different initiatives set their contributions in motion...

What is going to happen:

As it passes through cities there will be all kinds of forums, conferences and events (sporting, cultural, social, etc.) that will be organised according to the local initiatives that are emerging.

At this time hundreds of projects have already been set in motion by different individuals and organizations.

What are our goals and objectives:

To denounce the dangerous world situation that is leading us closer and closer to nuclear war, which would be the greatest catastrophe in human history – a dead end.

To give a voice to the majority of world citizens who want peace. Although the majority of the human race opposes the arms race, we are not sending out a unified signal. Instead we are letting ourselves be manipulated by a powerful minority and suffering the consequences. The time has come to stand together and show our opposition. Join a multitude of others in sending a clear signal, and your voice will have to be heard!

To achieve: the worldwide eradication of nuclear weapons; the immediate withdrawal of invading troops from occupied territories; the progressive and proportional reduction of conventional weapons; the signing of non-aggression treaties among nations and the renunciation by governments of war as a way to resolve conflicts.

To expose the many other forms of violence (economic, racial, sexual, religious…) that are currently hidden or disguised by their perpetrators; and to provide a way for all who suffer such violence to be heard.

To create global awareness - as has already happened with environmental issues - of the urgent need to condemn of all forms of violence and bring about real Peace.