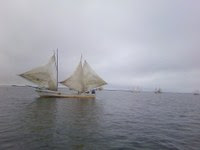 Utase-bune taken at Notsuke Bay, Hokkaido To avoid eel grass being damaged by propellers, fisher folks of Notsuke only use the power of the wind and tides when capturing shrimp. The volume of catch is strictly limited according to seasonal surveys.

The Pacific Asia Resource Center (PARC), a Tokyo-based social justice NGO, has released a new DVD "Sustainable Fisheries; Japanese Experience," both in English and in Japanese. This short documentary takes a look at grassroots and governmental efforts to create sustainable fisheries in Japan within a global and comparative context:


Nowadays, the disappearance of marine resources is a serious concern around the world.

This video analyzes the system within which marine resources are consumed and distributed in Japan, as well as how this system requires a huge amount of fish catch--thereby resulting in a depletion of resources.

With the goal in mind of finding alternative ways to fish, we covered various examples of sustainable fisheries that find ways to capture fish while still being able to maintain precious resources.

Such examples include making their own rules with which to regulate themselves; defending the ocean from reclamation; enriching local communities by implementing a system whereby profits are distributed amongst the community equally; and a system of fixed-net fisheries that leaves schools of fish untouched.

The video also introduces the Japanese Fishery Rights system, and explains how the Japanese Fishery Act incorporates the customs of community resource management, while also highlighting the important role that these rights have played in conserving the marine environment.

Chapter 1: What's Happening to Fish around the World?
The Japanese Diet and the State of World Fishing
Are Fish Disappearing?
Japan's Fisheries and Fishery Resources

Chapter2: Fishery Rights and Customs as a Way to Conserve the Blessings of the Sea
A Commitment to Nature: Haruku Island, Indonesia
Self-regulation of the Fishing Seasons: Himeshima Island, Japan
Self-regulation: The Three-Year Moratorium on Hatahata Fishing in Akita, Japan
Fishery Rights, Built on Customs
Defending Nature: Onyujima, Japan

Chapter3: Sharing the Blessings of the Sea
Community-Building with Fishery Resources
Cross-Border Management of Marine Resources: The Disappearance of Yellowtail from Odawara, Japan
Protecting the Sea to Secure Our Lives