"The world itself has a role to play in our awakening. Its very brokenness and need call to us, summoning us to walk out of the prison of self-concern." 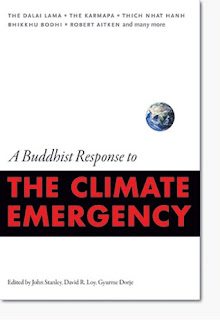 In a new book and recent declaration, Buddhist leaders are urging people to pay attention to and work individually and collectively to end global warming.

Editors John Stanley, David R. Loy, and Gyurme Dorje bring together voices of the world's leading Buddhist teachers in A Buddhist Response to the Climate Emergency, released by Wisdom Publication in August to precede the United Nations Climate Conference in Copenhagen in December.

An excerpt from Ringu Tulku Rinpoche's "The Bodhisattva Path at a Time of Crisis:"


When society degenerates, the world becomes worse. Peoples’ negative emotions and actions become raw, aggressive, greedy, and deluded. Environmental damage accumulates, militarism and war come to the fore, disease, famine, and diminishing lifespan begin to increase. Excessive greed causes us to disrespectfully take everything from the earth or sea, while ignoring the pollution we cause. This collective negativity harms ourselves, of course, and in the case of global warming, the damage will extend long into the future of ourselves and others. Consumerism relies upon fundamental confusion, amplified by advertising. The resulting over-consumption sows the seeds of self-destruction, as we can now see in the Arctic. The sea ice has melted so much that there is a waterway all round the top of the world. Instead of taking urgent stock of what this may mean for the survival of the world we know, the neighboring countries have started to fight about who gets any oil reserves beneath the ocean.

Emptiness, interdependence, impermanence, and the dreamlike nature of things do not prevent us from taking altruistic or positive action. It may be like a dream, but it still affects beings… If there is environmental or climate collapse, everybody will assuredly be affected — some more, some less, but there will be an unprecedented negative impact. Clearly it is a vitally important bodhisattva activity to prevent a universal disaster like the collapse of our living world.


In the run-up to the crucial U.N. Climate Treaty Conference in Copenhagen in December 2009, the Declaration that follows will present to the world's media a unique spiritual view of climate change and our urgent responsibility to address the solutions. It emerged from the contributions of over 20 Buddhist teachers of all traditions to the book A Buddhist Respose to the Climate Emergency. "The Time to Act is Now "was composed as a pan-Buddhist statement by Zen teacher Dr David Tetsuun Loy and senior Theravadin teacher Ven. Bhikkhu Bodhi with scientific input from Dr John Stanley. The Dalai Lama was the first to sign this Declaration. We invite all concerned members of the international Buddhist community to study the document and add their voice by co-signing it at the end of this page...