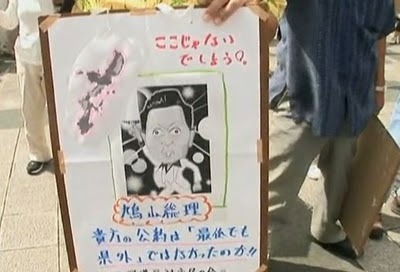 A video report from the Washington Post attributes Japanese anger over Hatoyama's betrayal of Okinawans as the reason for his fall:


Japanese citizens were promised by Prime Minister Yukio Hatoyama that Japan would remove an American Marine base from their island. After reversing stance and deciding against removing the military base on Okinawa, the public hit the streets to express their rage. His betrayal split his ruling coalition and helped trigger his resignation.

However, Foreign Policy in Focus editor John Feffer points a finger at U.S. government interference for Hatoyama's lack of choice in the matter:


Yukio Hatoyama’s political career is dead, and Washington’s fingerprints are all over the murder weapon.

Read the rest of this spot-on analysis here.
Posted by TenThousandThings at 12:00 AM
Email ThisBlogThis!Share to TwitterShare to FacebookShare to Pinterest
Labels: democracy, Human rights, Japan, Okinawa, peace

The link for "Read the rest of this spot-on analysis here. " needs fixing.

I agree with Feffer to a point, but Japan needs politicians with the backbone to stand up to Washington. I don't think it is an impossible task. To the contrary, the US is vastly over extended politically, economically, and in terms of energy. There is an opportunity for Japan to assert its own interests on this issue now.

I agree with you both.

The last person to stand up to Washington was PM Hosokawa, who didn't last very long, also.

I hope the Japanese government realizes how good the Japaense system is (for all its issues) and protects it from U.S. and European neo-liberal parasites--especially predatory bankers that want to get their hands on the hard-earned Japanese postal savings.

And that the next PM stands up for Japanese and Okinawan democracy and renegs the destructive base boondoggle planned for Henoko. The only people who want it are contractors who don't care what they destroy to earn a yen or dollar to spend on their tacky lifestyles.

Thanks, PandaB and hope you're enjoying the late spring :)

I'm glad he quit and the next PM can now reopen the Okinawa discussion based on the campaign promises made by the DPJ in 2009. Hatoyama betrayed voters and outraged people in Okinawa (remember the "anger" signs). I'm glad the protests have been peaceful, it shows a high level of awareness that Japan's leaders must raise to as well.