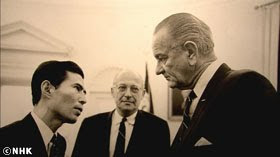 According to the original agreement between Japan and the U.S., Okinawa would be reverted to Japan in 1972 without the presence of nuclear weapons. However, behind the scenes, a Kyoto Sangyo professor, Wakaizumi Kei convinced then Prime Minister Sato Eisaku that Okinawa would not be handed over to Japan unless Japan allowed U.S. nukes on Japanese soil. In 1969, Sato gave Wakaizumi the green light to draft a secret proposal where Japan would eventually concede the condition calling for a nuke-free Japan, in order for it to be reverted to Japanese sovereignty as planned.


On Saturday night, NHK brodcast "The Truth Behind the Reversion of Okinawa." detailing the behind the scenes negotiations.  The documentary film was based on the 1994 memoirs of the late confidential agent Wakaizumi entitled  I wish I could believe there were no other options (Tasaku nakarishi woshinzamuto hossu).  After 25 years of silence, he revealed documents which verified the existence of a secret agreement on nuclear weapons between the U.S. and Japan.

NHK will air the program in English and Japanese on Monday, June 21st at 8pm, Tokyo Time. That NHK would show a documentary about such a controversial topic bears proof that the majority of people in Japan are disillusioned by and fed up with the games being played with Okinawan lives.

In an introduction to a November 2009 article that appeared in The Asia-Pacific Journal, research professor for Hiroshima Peace Institute Yuki Tanaka demands that any agreement like this based on nuclear deterrence be considered a "crime against humanity":

The revelation of the details of the secret agreements on nuclear weapons in itself cannot bring about a decisive solution to Japan’s nuclear problems, above all since irrefutable evidence has long been available in U.S. documents and circulated widely among Japanese journalists and researchers. The most important question is not the secrecy concerning the U.S. nuclear weapons program in Japan, but the foundations of that secrecy, i.e., Japanese support for the U.S. policy of nuclear deterrence. In the absence of a clear DPJ policy on the issues, it can be expected that similar secret deals will be made to sustain Japanese support for the U.S. policy of nuclear deterrence, including the presence of U.S. nuclear weapons in Japan....

Thus, the question that requires urgent attention is not whether U.S. nuclear weapons have been or will be brought into Japan secretly, but the entire structure of U.S. nuclear deterrence deployed in Japan. It is precisely this structure that leads American policymakers to view Japan as a “vassal state”; without transforming this policy it will remain impossible Japan’s democracy and freedom of information to function autonomously. If Japan’s new Democratic Party government genuinely wishes to establish an “equal partnership” with the U.S. based upon the principle of national “independence,” it must seriously consider freeing Japan entirely from the U.S. nuclear umbrella and its nuclear deterrence strategy.