Remembering the 1960 ANPO Struggle: “The souls of the dead live on” 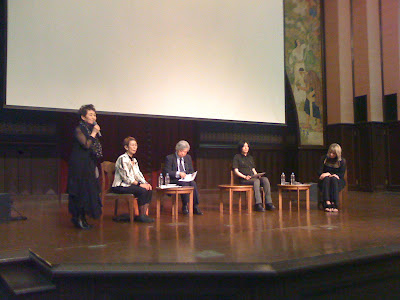 
Last night, in a packed auditorium at Tokyo University, a panel of scholars gathered to commemorate  the 1960 ANPO Struggle  and how its legacy continues to affect peace movements today.

ANPO (a Japanese abbreviation for the “Treaty of Mutual Cooperation and Security between the United States and Japan”) was signed on June 19, 1960, despite massive opposition by a vibrant peace and democracy movement spearheaded by citizens from all walks of life, including students, artists, and activists.

Central to the symposium discussion was the idea of how both individual and collective memory has continued to impact struggles for peace in decades following the ANPO protests.

“For many people in Japan, the presence of U.S. military bases had been all but completely forgotten about in recent decades—until the issue became dragged out of the shadows by the Futenma base conflict,” explained Oguma, a social historian. “And since the United States has not bothered to provide any explanation whatsoever about what the benefits of this air base might provide, it is only too obvious that this treaty is based upon a completely unequal relationship between the two countries.”

Renowned feminist sociologist Ueno Chizuko, who moderated the discussion, noted that the Futenma issue has been presented by the media with no accompanying historical context such as the resistance against the ANPO treaty.

The event featured a screening of a 15-minute clip from the documentary film ANPO: Art X War, directed and produced by Linda Hoaglund, an American who was born and raised in Japan. The film tells the story of the 1960 protests through the eyes of numerous artists who have spent their lives working to achieve peace.

When queried regarding her motivations for portraying the ANPO resistance movement through art, Hoaglund replied that this presented her with a departure point from which she was then able to explore the issue at increasingly deeper levels. “Ever since I learned as a child that my nation dropped an atomic bomb on Japan, it has become my lifework to seek peace while also exploring the distorted relationship between these two countries.”

“I wanted to the world to know what was really happening with the ANPO struggle—especially given existing media portrayals, such as The New York Times’ dismissing the protesters as just a bunch of crazy communist kids,” she continued. “It fascinates me to explore the idea of individuals rising up to demand justice when their governments are clearly doing the wrong thing.”

Hosaka, author of The Truth about the 1960 ANPO Struggle, commented, “In Japan, education in recent years has managed to convey the idea that Japan is somehow ‘not qualified to wage war.’ This is the completely wrong focus. Instead, we must begin teaching the idea that war is wrong, and that no country must wage it.”

The evening finished with brief and yet poignant remarks from famous singer and actor Kato Tokiko, who was herself a student at the University of Tokyo in the late 1960s. Kato has been deeply involved with peace and ecology movements together with her late husband Fujimoto Toshio, a student movement leader who was jailed in the early 1970s and later founded the Daichi o mamoru kai (Association to Preserve the Earth).

“I was sixteen years old when the ANPO protest occurred, and I remember feeling a fierce sense of despair that the revolution we were fighting for did not end up happening,” she told the audience. “We had a vision for a different kind of world, and so the way that events played out—including the death of Michiko Kamba—were completely shocking.”

Kato then led a moment of silence to honor Kamba, who was killed by police exactly 50 years earlier when protesters surrounded the Diet to demand that the ANPO treaty not be implemented.

“History is not something that can be forgotten; it lives on in every one of our hearts—as do the souls of those who died in war or fighting for peace,” she told audience members, of whom several were visibly moved.

“An amazing energy was born from our movement—and it will continue to grow and transform without end.”