Gavan McCormack on the DPJ election: Kan victory only postpones crisis over unwanted US bases in Okinawa


The second looming election is that for leadership of the Democratic Party of Japan, which because of the party’s majority in the House of Representatives carries with it the office of Prime Minister. Scheduled for 14 September 2010, current Party leader (and Prime Minister) Kan Naoto confronts challenger Ozawa Ichiro.

The two candidates contested Okinawa, in particular Futenma policy. While both had been notably silent during the fierce trans-Pacific exchanges that eventually brought Hatoyama down (save for Ozawa’s enigmatic rhetorical question late in 2009: “Is it permissible to bury that beautiful, blue sea?”), once the Hatoyama surrender deal of May 2010 was in place, Kan clung to it and accused Ozawa of causing “confusion” by wanting to revisit it. In essence, however, both presented a study in ambiguity: Kan insisted on honouring the Agreement while “reducing the base burden” on Okinawa and declaring that he would “not make a decision over the heads of local residents.” Somewhat remarkably, he was reported as saying, “I am fully aware that the agreement is unacceptable for the Okinawa people.” Ozawa struck a similar note, saying that the Agreement had to be revisited, because “[w]e cannot carry out the current plan as it is due to opposition from Okinawa residents,” though he admitted he had no clear idea of how to revisit it. He seemed puzzled that Japanese leaders were apparently incapable of speaking their mind when meeting with US government officials. At that level, both were saying they would do what the agreement with the US required to be done but would not do it forcibly. This could only mean that it would not be done at all, under either, but given US pressures they could not bring themselves to say so.

It was the broader vision that Ozawa presented that filled Washington with fear and anger, as when he reiterated his controversial 2009 position that the US 7th Fleet home-based at Yokosuka should be sufficient to any Western Pacific security purpose, in which case not only Futenma but all other bases would presumably be returned to Japan (and Okinawa) as redundant. Washington’s “Japan handlers” could not tolerate this. They were presumably also less than happy when Ozawa made an offhanded comment that he “liked” Americans though he found them tansaibo or unicellular, a gentle way of saying rather stupid. When Ozawa took five plane loads of Japanese parliamentary and business leaders on a mission to Beijing shortly after the DPJ took office in 2009, Richard Armitage scathingly referred to “the Japanese People’s Liberation Army descending on Beijing.”

Washington’s hostility to Ozawa was reflected throughout almost the entirety of the Japanese national media. In sharp contrast to the irresponsible and corrupt profligacy of successive Japanese governments (of which the Cabinet Secretary’s secret fund was characteristic), to which media and politicians readily turned a blind eye, actions by an Ozawa staffer, for which he himself denied personal knowledge, were trumpeted across the national media as corruption rendering him unworthy of public office.

Both Kan and Ozawa stressed the importance of the US relationship and were at pains to avoid anything that might be construed as serious doubt about the “alliance.” Neither could openly admit that the series of agreements between the two countries on the Henoko construction dating back to 1996 but culminating in May 2010 no longer made sense. Not only was it impossible to impose an unwanted base on Okinawa but the idea that the Marines played a crucial “deterrent” role, such that the peace and prosperity of East Asia somehow depended on them, when many of them were actually absent fighting wars in Iraq and Afghanistan, and as of late 2009 there were only 14,958 US Marine Corps servicemen in total in Okinawa, with 9,035 family members. If 8,000 Marines and 9,000 family members were to be transferred to Guam as stipulated in the various Agreements, that would leave a few thousand Marines and no family members in Okinawa. It was laughable to suggest that their retention was crucial to the peace of the region, and perverse to ignore the fact that the Pentagon itself had decided to build its core Marine concentration for the Western Pacific and East Asia on Guam.

Neither Kan nor Ozawa could concede that the decision was not theirs to make because it was already being made by Okinawans. Neither had any answer to the problem. An Ozawa victory would lead to an immediate “crisis” as he would be obliged to return to the status quo of the Hatoyama government as it took office in 2009, i.e., to summon Washington to the negotiating table, while a Kan victory would postpone the crisis while he exhausted every possibility of “persuasion” and then began to take steps towards implementing the Agreement. In other words the 14 September DPJ choice (so far as the “alliance relationship” and the Okinawa issue was concerned) was to face the crisis immediately or to postpone it.

It is also worth noting that part of Ozawa’s proposed alternative was for the Japanese Self Defense Forces to assume responsibility from the US for the defence of Okinawa and other island territories. The idea that a Japanese military presence might be acceptable in Okinawa where an American was not has a certain superficial attraction, but was based on ignorance of the deeply anti-military sentiments of Okinawans, who remember many centuries of peaceful coexistence with China and have little if any of the mainland sense of “China threat” while their memory of being exploited and betrayed by the Japanese military in 1945 is seared deep into the Okinawa soul. An expanded SDF military presence might therefore stir just as much opposition as an American Marine one.

Read the entire analysis of the Nago election, today's DPJ election, and the upcoming Okinawan gubernatorial election (and exploration of catastrophic environmental and biodiversity consequences here. McCormack also explores the castastrophic environmental and biodiversity consequences (destruction of unique habitats and extinction of species) inherent in the U.S-Japan military expansion proposals for Okinawa and Guam. 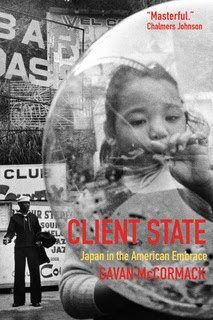 (For comprehensive background on the strange, unequal relationship between Washington and Tokyo, read Gavan McCormack's 2007 Client State: Japan in the American Embrace. Glenn D. Hook: "Gavan McCormack's important new book on Japan as an American 'client state' sheds a penetrating light on the seismic changes to have affected the country in the early years of the twenty-first century, thereby exposing how the American embrace of Japan has become increasingly stifling.")
Posted by TenThousandThings at 12:45 AM
Email ThisBlogThis!Share to TwitterShare to FacebookShare to Pinterest
Labels: books, China, democracy, Japan, Okinawa