Help say no to Nike's privatization of Tokyo's Miyashita Park! 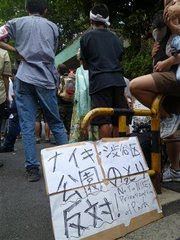 As reported this past spring in the Ten Thousand Things entry Coalition of homeless, activists, and artists rally to save Tokyo's Miyashita Park from NIKE construction, a strong and committed social movement has long been ongoing in order to protect this public space from corporate takeover.

At 6:30am on September 15th, however, roughly 120 police officers, guards, and Shibuya Ward park officials suddenly appeared and closed off the entirety of the park.

After supplies were brought in, all entries to the park were sealed off with fences and blocked by lines of local ward officials and guards. Riot squad vehicles and over 40 plain-clothes public safety officers also surrounded the periphery of the park in a glaring demonstration of needless excess. Signs posted on fences read, “In accordance with provisions regarding prohibition of park use in Section 7 of the Shibuya Ward Public Parks Ordinance, use of Shibuya Ward Miyashita Park is currently prohibited” and “Miyashita Park will be closed due to construction for maintenance”.

The closure of Miyashita Park took place without warning. That morning, one of the park’s homeless residents was injured when he was forcibly dragged out by 10 guards. It is important to note that the forthcoming “construction for maintenance” cited in the signs refers to Nike’s planned conversion of Miyashita Park into a sports facility. The sports goods giant will not only foot the bill for the construction but has also purchased the rights to rename the public park “Miyashita Nike Park”.

Shibuya Ward’s planned start date for construction (contracted to Tokyu Construction) was originally in April 2010, but organized protest has thus far successfully resulted in stalling the park conversion. While Shibuya Ward is saying that Miyashita’s sudden closure is for “tree-pruning and garbage removal estimated to take about a week”, other statements made by officials to the press such as “We’d like to continue from there with the construction” clearly suggest that this eviction is being carried out for the purposes of installing Nike facilities.

On September 16th, an order for the removal of tents, posters, artistic works and other materials belonging to The Coalition to Protect Miyashita Park from Becoming Nike Park (The Coalition), as well as a storage shed used to hold possessions for homeless persons by the Shibuya Free Association for the Right to Housing and Well-Being of the Homeless (Nojiren), was issued in the name of Shibuya Mayor Toshitake Kuwahara under Section 27 Item 1 of the Urban Park Act. The order states that “these properties (listed in the attached document)” are in violation of Article 6 Item 1 (regarding permission for occupancy of urban parks) of the same Act and, as such, must be cleared by noon of September 18th at the expense of the property owners.

This means that the ward is preparing to undertake administrative subrogation procedures, as happened in past evictions of homeless persons from Nagoya’s Shirakawa Park in 2005, Osaka’s Utsubo Park and Osakajo Park in 2006, and Osaka’s Nagai Park in 2007. In each of these past cases, however, evictees were first given the opportunity to present their case in writing prior to the eviction following receipt of the notice demanding removal of their property. In the case of Miyashita, on the other hand, no such opportunity was provided. After warnings insisting on the “removal of the unauthorized property” were posted on August 24th, 25th, 26th, and 31st, the official removal order was issued suddenly and with disregard to necessary legal proceedings.

Moreover, despite the fact that Article 27 Item 1 of the Urban Parks Act asks for the owner’s voluntary removal of personal property, Shibuya Ward has made it impossible for owners to conform since closure of Miyashita Park means that even persons who wish to reclaim their property are being denied entry. In addition, while the order for property removal was served in accordance with Item 3 of the Urban Parks Act (enabling park management to order removal “where, through no particular fault, the party who must be ordered to act cannot be verified”), as of September 15th Shibuya Ward could no longer justly or legally claim that “the unauthorized property listed” actually belonged to “an unidentified party” seeing as how two of the homeless residents of the park signed papers verifying items as their property. (A formal request to examine the Order for Removal of Property Belonging to Unidentified Parties was filed with the Minister of Land, Infrastructure and Transport on September 17.)

Then, on the afternoon of September 18th, immediately following the expiration of the set deadline for property removal, notices citing Article 3 Item 1 of the Act on Substitute Execution by Administration were posted outside of the park while both Nojiren and The Coalition received legal reprimands via express mail. The Ward is clearly acting in extreme haste.

Since we were made aware of Nike’s plans to convert Miyashita Park, The Coalition has openly voiced our opposition for the following reasons: 1) awarding use of this public space to one company for the creation of a profit-making sports facility will also effectively result in denying part of the public the same right to use the park; 2) the plan for the conversion was settled without informing or consulting ward residents and park users, and advanced in an undemocratic, top-down manner by the mayor and select members of the ward assembly; 3) if the conversion is carried out, then homeless residents of the park will be expelled and the public will lose an important space for free assembly.

The closure of Miyashita Park, the order for property removal, and the move towards an administrative subrogation all effectively undo with one fell blow the hard work, the artistic vibrancy, and the many discussions, events, and encounters all manifested in The Coalition’s movement to “Keep Miyashita everyone’s park”. The ward’s actions have all been carried out by strong-arm tactics under law enforcement currently preparing for the November 13 APEC Summit in Yokohama with tightened security measures surpassing those undertaken during the 2008 Hokkaido G8 Summit.

Shibuya Ward is obviously working closely with the police, as evidenced by the police department’s overwhelming presence on September 15th along with the fact that the ward official in charge on that day, namely, the Park Infrastructure Coordinator, not only stated that “all this has been cleared with Hirano (Shibuya Ward’s Security Department Chief)” but also demonstrated a need to call the police every time something arose.

Homeless persons are being uprooted and denied their personal possessions by this eviction at a time when the economy is undergoing a long-term decline and more and more people are being forced onto the streets due in part to insufficient job creation and social welfare policies.

We cannot help but feel that Shibuya Ward’s actions are devoid of respect for human rights and human dignity seeing as how: 1) officials are treating property belonging to homeless individuals (along with that belonging to The Coalition) as if it were trash, and 2) homeless persons who had been violently expelled were curtly told, “It’s on you to start looking (for a new place to sleep)”.

We resent Shibuya Mayor Toshitake Kuwahara’s collusion with a major corporation to turn a public park into a corporate advertisement as well as the antagonism directed at homeless people, which demonstrably threatens their well-being. We urge Shibuya Ward to: 1) put an immediate stop to the closure of Miyashita Park, 2) apologize and offer compensation to homeless persons that were violently expelled by guards from the park, and 3) cancel the order for property removal and halt and all administrative subrogation proceedings.

The Coalition will not rest until the public has reclaimed Miyashita Park and Nike's plans to convert it have been abandoned. Please show your support by faxing or emailing us to add your name and/or your organization's name to our protest statement. We ask for all names by Wednesday September 29. Please let us know if you would like your name to be made viewable to the public, or kept private. Messages of solidarity also welcomed!

Please also contact Shibuya Ward and Nike (Japan) to voice your opposition. Together we can bring an end to this unjust takeover of Miyashita Park!

(Translated by Rayna Rusenko from Japanese entry of the campaign blog, which may be read here).
Posted by TenThousandThings at 3:45 AM
Email ThisBlogThis!Share to TwitterShare to FacebookShare to Pinterest
Labels: citizen action, cultural heritage, historic preservation, homeless, Japan, justice, Tokyo