Think Outside the Tank: Petition to Stop the Kyoto Aquarium 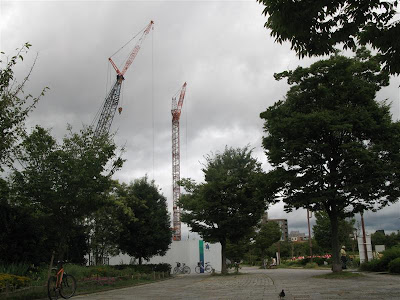 Hypocrisy plagues the home of the Kyoto Protocol as the Kyoto City government ignores the public's demands to terminate construction of a gargantuan aquarium in the heart of Umekoji Park by Orix Corporation. However, with construction stalled by the discovery of Heian artifacts at the site, Kyoto City Residents Against the Aquarium have taken the opportunity to launch a petition campaign demanding that a moratorium be placed on this frivolous destruction of greenery and unnecessary sacrifice of the natural environment.

Michael Lambe, at Deep Kyoto, has summarized the main points of the petition addressed to Kyoto Mayor Daisaku Kadokawa:
Historically, aquariums stress animals, and there is a constant need to steal animals from the wild in order to replace them. While aquarium proponents may argue there are situations where it is necessary for humans to intervene in order to maintain the survival of a species, the intended purpose of the aquarium is to generate revenue at the expense of, not for the benefit of, animal lives and nature.

Chief Priest of Honenin Temple founder of Kyoto Citizens’ Committee for future of Umekoji Park and The Kyoto Aquarium Plan voiced his concerns in the Kyoto Shinbun on October 29, 2009:


We need to see all aspects of this plan brought to light before a final decision. It appears that the plan was already decided, lacking citizen input and consensus before it was made public. Even though an agreement was made between the city administration and a private business, it involves use of public land, which belongs to the people. After conducting numerous meetings about this issue more questions than answers arose.

The first question concerns the need for an aquarium for Kyoto city. What consideration has been given to the affect on the variety of marine wildlife caused by their capture, transportation and internment, as this is not their natural environment. I am sure the aquarium would have an educational component but how does this relate directly to the environment?

How does this affect Global Warming? Will it decrease CO2 emissions? Will it benefit the very species to be housed there? What is the carbon foot print of this aquarium? The city claimed that the aquarium could teach children to respect nature and wildlife, how can this be true?

Is the concept of environmental education at this facility actually about the environment? Let us not forget this is Kyoto City where the Kyoto Protocol was originated, where citizens take initiative. This is our legacy.

I can see how the aquarium could be enjoyed by parents, young adults and children. But first, we need to answer many questions. Our rivers, which are quite natural can also be used to educate on the environment. There are more than 100 aquariums in Japan. Kyoto City can provide it’s own method of environmental education using our two rivers, The Katsura and The Kamo, which hold rich wildlife habitats.

Why perpetuate a defunct form of "edutainment" when there are sustainable alternatives to keeping sentient beings in captivity that can fully capture the hearts and souls of children and adults alike, eliminating the compulsion to callously capture living creatures? The natural sanctuary that is Umekoji park, would only be turned into a prison should aquarium plans proceed.

The Kyoto government must pull the plug on plans for the aquarium and cultivate a culture of ethical treatment of all life forms in line with its commitments in the Kyoto Protocol.