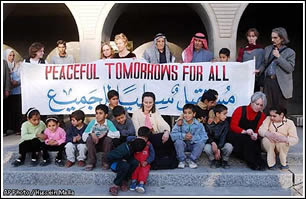 Wars are poor chisels for carving out peaceful tomorrows.

Earlier this year, September Eleventh Families for Peaceful Tomorrows joined with Hibakusha groups (and Peace Philosophy Centre) to hold "Wisdom of the Survivor," a conference seeking to draw from the wisdom of survivors to stop chains of revenge, hate, violence, and wars:


Seeking to influence the debate on nuclear disarmament and abolition, many Hibakusha have made the pilgrimage to past Non-Proliferation Treaty Review Conferences, which are held at the United Nations every five years. Now they are getting older and their chance to witness their dream of a nuclear-free world is growing shorter. Inspired by President Obama’s Prague pledge to work for “a world without nuclear weapons,” and knowing that the entire non-proliferation regime is hanging by a thread, they come this time with a greater sense of urgency than ever...

The unprecedented interaction between the Hibakusha and the 9/11 community will constitute the center of this conference. We believe that bringing together these two groups for a day of testimony and conversation will provide an understanding of the unique political, psychological, and spiritual contributions that survivors of atrocity and their families can make towards a peaceful future.

Like the proverbial tree, if a teachable moment occurs and no one hears the lesson, is it still a teachable moment? If you’ve been paying attention to the controversy, real or imagined, over the so-called “Ground Zero mosque” you may have found yourself considering some form of this question. How, nearly ten years after the 9/11 attacks, can some remain so insular, so ill-informed? How has anger managed to keep so many from completing—or even starting—their necessary journey through grief to wisdom and understanding? How are we even having this conversation in 2010?

For the members of September 11th Families for Peaceful Tomorrows, we’ve been having conversations of a different sort since the fall of 2001. That’s when a handful of family members of 9/11 victims decided to turn their grief into action for peace by calling for alternatives to war during a symbolic walk from the Pentagon to the World Trade Center facilitated by Kathy Kelly of Voices in the Wilderness (now Voices for Creative Nonviolence). A person-to-person trip to Afghanistan under the auspices of Medea Benjamin and Global Exchange took place in January, 2002, putting us in contact with our counterparts, family members of those lost to the U.S. bombing done in reaction to 9/11. Our group was launched that Valentine’s Day with the sponsorship of the Fellowship of Reconciliation, the support of the American Friends Service Committee and the Hague Appeal for Peace and goals that included promoting dialogue on alternatives to war, supporting others seeking non-violent responses to terrorism and calling attention to threats to civil liberties and other freedoms as a consequence of war.

It was the stories we told of our own losses, and the stories our members brought back from Afghanistan of losses inflicted in our names, that forged a connection among our members and people around the world who had similar experiences, shared our desire for non-violent alternatives and had formed like-minded organizations. They included Israeli and Palestinian members of The Parents Circle, Japanese Hibakusha, or atomic bomb survivors, family members who lost loved ones in the 2005 train bombings in Spain, the Iraqi peace coalition La’Onf, the South African Institute for Healing of Memories, and a host of others. 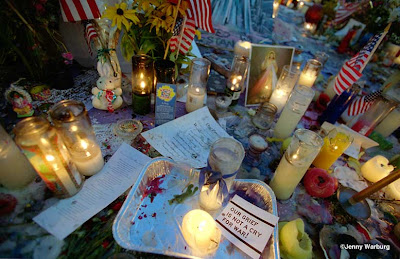 Bringing our stories, and their stories, to a wider audience is one of the goals of our new web site, 911 Stories: Our Voices, Our Choices. In the critical year leading up to the tenth commemoration of the September 11th attacks, it will provide a key opportunity to revisit the paths that could have been taken in the days after 9/11. How could we have responded differently? What could 9/11 families, and citizens around the world, have taught us about their experiences of terrorism, political violence and war? What choices could we have made, and what choices can we make today, to create peaceful tomorrows for everyone?

911 Stories: Our Voices, Our Choices will profile our members, collecting their public statements, speeches, essays, letters to the editor and telling stories of the projects they have undertaken. Through a dedicated YouTube channel it will feature film and television appearances and interviews with Peaceful Tomorrows members everywhere from Afghanistan to Iraq, from Hiroshima to Oklahoma City. It will also shine a light on the work of those others around the world who have been similarly affected by terrorism, political violence and war and have chosen to work for peace and nonviolence.

Utilizing the latest technologies with an eye toward accessibility, 911 Stories: Our Voices, Our Choices will serve as a rich, user-friendly resource for a range of constituencies at a time of unprecedented interest. We will partner with progressive educators to develop an array of downloadable, age-appropriate curricula for students in grade school through adult education. For the media, the stories will provide ideas and contact information for interviews and articles. For politicians and policymakers, the Web site will be a source of successful, real-world examples of the power of non-violence. And for the general public, the stories will serve as a source of hope, inspiration and new ways of envisioning their world.

We will work with advocacy organizations, peace and justice organizations, places of worship, public libraries and other organizations to ensure the project’s prominent visibility and broad distribution. And we hope the web site will be the centerpiece of a series of public and online forums that will increase dialogue among those with differing points of view. It will remain as a living document to the love we feel for those we lost on 9/11 and our enduring hope for peaceful tomorrows for everyone.

"911 Stories: Our Voices, Our Choices"will appear at www.911stories.org beginning September 11, 2010 with a small sampling of our work. As our inventory of stories grows week by week over the coming year, we welcome your reactions and invite you to share your ideas about how we can partner with you to keep the events of September 11th a teachable moment for future generations of Americans and others around the world.