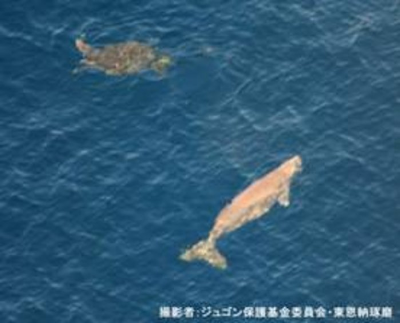 In "The US-Japan ‘Alliance’, Okinawa, and Three Looming Elections," published last week at Japan Focus, Gavan McCormack not only examines the role of Okinawan and the DPJ elections on the efforts to save Henoko from destruction, the Australian scholar also looks at Henoko's unique and irreplaceable biodiversity at stake:


Setting aside the diplomatic, political, and military considerations, on ecological grounds alone the idea that a huge new military installation should be constructed at Nago is implausible. To create the giant, combined forces military base (misleadingly described as a “Futenma replacement facility” when it was to combine, inter alia, a deep-sea port facility for docking nuclear submarines) the coral, dugong, turtles and other creatures were simply a nuisance. When the Marine Corps first developed its plans for militarizing the Bay, in 1962, they began to deal with the coral by bombing it. Such a course is not open to them today, but the scale of militarization envisaged could be expected to have the same effect over the longer term. As with Guam, however, the Henoko project can only proceed when the necessary legal requirements for environmental protection (national and international) are addressed (whether by meeting or by evading).

The Japanese Assessment Law (Asesuho) simply mandates the party proposing works to consider their impact and take appropriate steps to protect the environment. It does not stipulate an impartial, scientific process and includes no provision for a project to be stopped from going ahead on environmental grounds. In Okinawa, the Japanese Defence Facilities Bureau (part of what was then the Defence Agency and is now the Ministry of Defence) reviewed its own project between 2007 and 2009.

The Assessment’s Interim Report, in 5,400 pages, was issued in April 2009. The final version is being withheld till after the gubernatorial election of late November 2010, but it is generally assumed it will contain few changes in substance to the 2009 version. That Report paid no attention to the likely impact of typhoons, because none happened while the survey was in process. It concluded that “dugong are not in the area” since it saw none, though critics protested that the dugong were not to be seen precisely because the disturbances caused by the investigation process had driven them away (and one surfaced off Henoko on 12 May 2010, as if to give the lie to the assessment).

Above all, as critics pointed out, an environmental assessment to which no information was available on the kinds or number of aircraft that would be using the facility, or the materials that would be stored or used on it, could scarcely be serious. Though the Government of Japan was to construct the facility, it would hand it over to be used at the total discretion of the US Marine Corps.

No objection was more serious than the environmental. Under the Okinawa Prefectural Government’s Guidelines for Environmental Protection, the coastal areas of Henoko, where the internationally protected dugong graze on sea grasses, turtles come to rest and lay their eggs, and multiple rare birds, fish, crustaceans, insects, and animals thrive, are classified as rank 1, warranting the highest level of protection. A colony of blue coral was discovered only in 2007 (and in 2008 placed on the IUCN’s “Red,” or critically endangered, list, joining the dugong) and a 2009 World Wildlife Fund study found an astonishing 36 new species of crabs and shrimps, and in July 2010 Tokyo marine science researchers found an equally astonishing, “rain-forest”-like variety of 182 different species of sea grasses and marine plants, four of which were probably new species, in Oura Bay. The discovery of the blue coral, new species of shrimps and crabs, and sea grass came after the survey and thus formed no part of it. 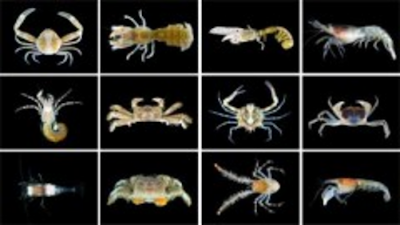 Some of the new crab and shrimp species discovered in Oura Bay.
(Photograph: Fujita Yoshihisa)

The construction process (for the “V” version) would require 21 million cubic metres of fill, of which 17 million cubic metres would be sea sand. That means a staggering 3.4 million dump truck loads of sand, more than 12 times the current volume of sand extracted in a year from throughout Okinawa. The “I” version would require marginally less landfill, 18.9 million cubic metres. But how either could proceed without causing significant impact on Okinawa’s fragile land and sea environment defies the imagination.

The Okinawa Prefecture Environmental Impact Committee found multiple faults in the Assessment Interim Report and sought supplementary examination of 412 items in 59 categories (including dugong numbers). Inter alia, Governor Nakaima recommended a multi-year study of the dugong, though obviously aware that by allowing the Report to stand that would never happen. Okinawa’s leading environmental law authority and a key figure in the court action, former Okinawa University president Sakurai Kunitoshi, declares the process was “unscientific” and fatally flawed. In the International Year of Biodiversity, it was bizarre, he noted, that the Government of Japan should go to such lengths, and spend such amounts of taxpayer money, to push through a thoroughly unscientific justification for the destruction of one of its (and the world’s) most precious concentrations of biodiversity. 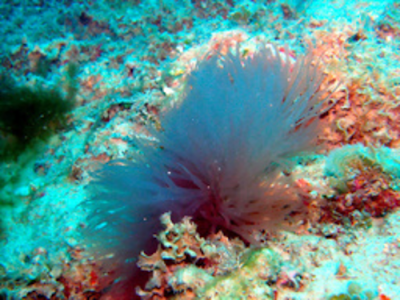 One of the four newly discovered sea grasses of Oura Bay, Henoko, Okinawa. (Photograph by Ohba Hideo of Tokyo Univ. of Marine Science and Technology)

It seems probable not only that the Henoko Environmental Impact Assessment lacked scientific credibility by international standards but that it may have breached both Japanese and American law. In San Francisco a federal court judge in 2008, hearing a suit against the Pentagon on behalf of the Okinawan dugong and their marine habitat, issued a ruling that the U.S. Department of Defense (DoD) had violated the National Historic Preservation Act (NHPA) by failing to “take into account” in the planning of the construction of a US military base in Henoko and Oura Bays the effects of the construction on the dugong (Dugong dugon), a Japanese “natural monument.” She ordered the DoD to comply with the Act by generating and taking information into account “for the purpose of avoiding or mitigating adverse effects” on the dugong. In Japan, 344 Okinawans launched a suit in the Naha District Court in August 2009 to have the assessment declared invalid.

As the 14-year struggle over Henoko ground on, civic and international organizations protested the implausibility of the region’s largest military base being imposed on an environment whose extraordinary biodiversity was only slowly being understood: It was as if the Grand Canyon were being designated a military base, or in Australia, Kakadu.

Read all of McCormack's "The US-Japan ‘Alliance’, Okinawa, and Three Looming Elections" here. 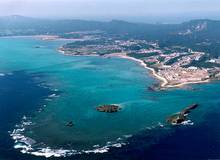 The Center for Biological Diversity wrote that


Okinawa was "dubbed the Galapagos of the East."
Posted by TenThousandThings at 4:28 AM
Email ThisBlogThis!Share to TwitterShare to FacebookShare to Pinterest
Labels: biodiversity, cultural heritage, historic preservation, oceans, Okinawa

This is insane! Has it been built?

Not yet, but the current Prime Minister has not stood up to U.S. pressure to continue building the base there and has said relocating the base to Henoko would be a be a "better" option, though not the best. Yet, the Okinawans and their supporters are still fighting and continue to have sit-in protests. Hopefully it will not get built!