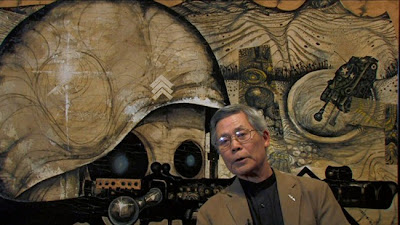 An article by NY-based reporter Takayasu Ogura published Jan. 19 of this year in The Mainichi on Linda Hoaglund's film, ANPO:


"ANPO" is centered on interviews with Japanese artists, and seeks to explore the fervor which gripped Japanese society over the treaty signing. "I want people to recall how passionate people were about it," says Hoaglund.

Linda Hoaglund was born to American missionaries in Kyoto, and until she moved to the United States at 17 was raised in Yamaguchi and Ehime prefectures. Fluent in both English and Japanese, she began writing English subtitles for Japanese films. Her credits include the subtitles for films of famed directors Akira Kurosawa and Hayao Miyazaki, while she also produced the 2007 documentary "TOKKO," about survivors of the World War II Tokkotai air units, more commonly known in the West as "kamikaze."

Although Hoaglund has no personal experience of the struggle over the security treaty, she became interested in the issue after seeing films and photographs from the period. The Japanese government at the time "suppressed the popular movement (against the treaty) through the power of the police," Hoaglund says. "I feel that the United States didn't make an issue (of this), even though it was essentially against American values, because the U.S. treated Japan like a dependent state. I thought I should make about resistance to that."

Since last May, Hoaglund has conducted video interviews with some 30 prominent members of Japan's arts world — including painter Hiroshi Nakamura, singer Tokiko Kato, photographer Miyako Ishiuchi, and director Kaneto Shindo — asking them about their experiences related to the struggle over the treaty.

She also explored some of the events precipitating Japanese anger against the treaty, such as the Fukuryu Maru No. 5 fishing boat's irradiation near the Bikini atoll -- where the U.S. conducted hydrogen bomb tests -- in 1954, and the "Girard Incident" of 1957, when a housewife was shot to death on a U.S. Army firing range in Gunma Prefecture.

Hoaglund also filmed in Ginowan, Okinawa Prefecture, location of U.S. Marine Corps Air Station Futenma, and around Henoko, where the base is scheduled to be moved.

"The anger and solidarity over the security treaty is very much alive in Okinawa," Hoaglund says. "But the American people and American media are unaware how many bases are concentrated in Okinawa, or of the rapes and other crimes perpetrated by U.S. military personnel."

Hoaglund also considers "ANPO" a requiem for Michiko Kanba, the 22-year-old University of Tokyo student killed in an anti-treaty demonstration on June 15, 1960.