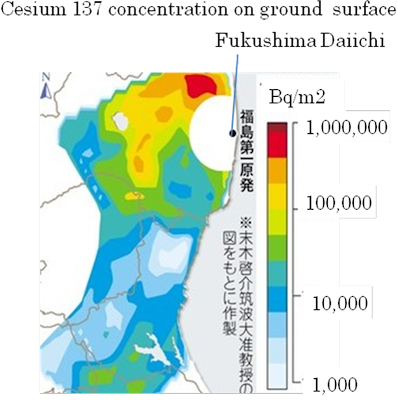 (A “Hot spot” map: Cesium 137 contamination in Fukushima and prefectures to the south (Ibaraki, parts of Tochigi, Chiba, Saitama) based on measurements by the University of Tsukuba. (Map from Chunichi Shimbun)

Another must-read article on nuclear radiation at APJ by the Say-Peace Project, translation by John Junkerman and introduction by Satoko Norimatsu: "Protecting Children Against Radiation: Japanese Citizens Take Radiation Protection into Their Own Hands":


Page 14 of the Japanese government's guide for Fukushima educators and parents, which explains how anxiety (over radiation) can trigger stress reactions in the brain, causing various physical ailments.

For example, the Ministry of Health, Labour and Welfare’s pamphlet for pregnant women and mothers,3 of which three million copies were distributed to preschools, nurseries and clinics across the country, emphasizes that food, water, and breast milk are all safe within the government’s provisional standards. It is a “Don’t Worry” pamphlet with little concrete information to support their safety claims or about how to minimize radiation risks for infants, children and pregnant women. The Japanese Ministry of Education (MEXT)4 also produced a guide for teachers and parents in Fukushima, which stressed that “weak” radiation doses such as 250 mSv(millisieverts) over a number of years will have no health effects,5 and increased cancer risk was not recognized with cumulative doses of under 100 mSv, while the existing exposure limit for ordinary people is 1 mSv/year, and that for nuclear workers is 20mSv in Japan.6 Yet nuclear workers have been recognized as having radiation-caused sickness at an exposure level averaging as low as 5.7 mSv/year.7 Again, the entire guide emphasized “Don’t worry too much,” including a large section to describing the negative psychological effects of worrying about radiation.

These attempts by the government to downplay radiation effects have been successful. Even in Fukushima, life seems to go on as usual. Most people are not wearing masks, and children are at play on dusty playgrounds. But the tide is changing now, as more revelations are made about the government’s and the electric company’s failure to disclose information in a timely manner, and as more people use the Internet and social media to exchange information and organize networks. Francis Boyle, an international law professor at the University of Illinois and a nuclear policy specialist, urged people in Japan “to protect themselves from their own government and from the nuclear industry.”8 Despite the government’s and the mainstream media’s massive campaigns to promote the idea that the affected areas are safe and to encourage consumption of produce from those areas, people are finally starting to take safety into their own hands, where it belongs. This is partly because more and more “hot spots,” or, irregularly-formed highly contaminated areas, are being discovered, not only in relatively populated areas within Fukushima Prefecture such as the cities of Fukushima and Koriyama, but also throughout the Kanto region, including Tokyo, with forty million people, one third of the nation’s population. People can no longer regard the nuclear crisis as being restricted to Fukushima and its people only.

Parents’ groups, being formed everywhere,9 are conducting their own independent radiation measurements and demanding that their cities do more to protect residents, especially children, who are more susceptible to radiation. In Fukushima, a university professors’ group,10 town mayors,11 and even prefectural assembly members have raised doubts over the credibility of the government’s official radiation guidelines. They are demanding dismissal of Yamashita Shun-ichi, the prefecture’s “expert radiation adviser,” who has been teaching seminars and appearing frequently in the media to convince people in Fukushima not to worry and to stay where they are.12

One such citizen-initiated effort is “Protecting Children from Radiation Exposure” by SAY-Peace, a Tokyo-based NGO, among the first comprehensive guides of its sort,13 published in late May and immediately revised in June. We at The Asia-Pacific Journal have felt the need for such a citizen-initiated radiation guide being made available in English, especially now that the Western media’s interest has declined, and much of the latest information about contamination and radiation risks are not as readily accessible in languages other than Japanese. The struggle continues between the government, which wants to hide information and minimize radiation fears in order to evade responsibility and to minimize economic losses, and citizens, who want to know and share the truth in order to minimize radiation risks for themselves, their children and their communities, by creating, using, and spreading tools like this radiation protection guide.

Read the important article by Say-Peace Project here.
Posted by TenThousandThings at 4:19 AM
Email ThisBlogThis!Share to TwitterShare to FacebookShare to Pinterest
Labels: children, Fukushima, Nuclear-Free