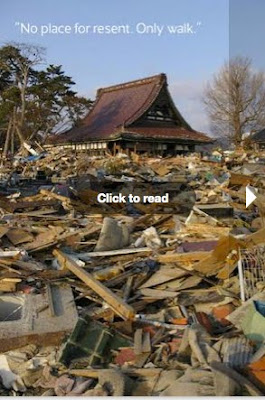 "It is one thing to watch video of what happened on youtube or to view
photographs, quite another to be surrounded by it 360 degrees, and yet
another still to stand in it and try to comprehend 500 km of coastline
affected in the same way."


Ten days after the strongest tsunami in recorded Japanese history devastated North Eastern Japan, Kimberlye Kowalczyk bore witness not just to devastation, but the resilience of the people affected everywhere along the coasts and as far deep as one kilometer inland. Winifred Bird, a Japan-based journalist who is also closely covering the disaster as it unfolds, accompanied Kowalczyk to Ishinomaki, Japan. Kowalczyk explains to Voices from the Ground:


I had expected to be devastated, but instead I was humbled and inspired by many individuals I met whom I can only describe as “enlightened”. I witnessed great giving, compassion, and solidarity.

Not only from the volunteers, but from survivors. I went to give and instead was given to; great lessons about impermanence, resilience, and gratitude.

There is still much work to be done. As the media moves on to the next Hot Topic, the road through reflection, healing, and rebuilding is still long for Japan. It is my sincere hope that many movements for peacebuilding will arise from the debris.

As the new Hot Topics start to sprinkle the airwaves, as the media begins to turn its kaleidoscope towards the inefficacy of the current prime minister, or the impressive win of the Japanese Women's soccer team in the World Cup, over 420,000 people remain displaced. As other parts of Japan, the world, carry on with the daily grind, coping by detaching, 27,000 people are dead or unaccounted for. Thousands and thousands are still, as Kowalczyk describes, "waiting to be pulled out of the water."

However, thousands and thousands, continue to dedicate themselves to recovery efforts and the sharing of knowledge of disaster management. Peace Boat is dispatching volunteers biweekly to the hardest hit areas of Tohoku. 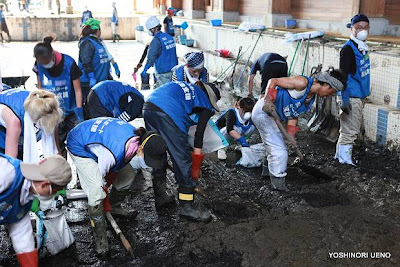 Volunteers cleaning out a swimming pool brimming with mud.

According to Peace Boat staff, even two days is enough to make a big difference:


Even for staff who have been in Ishinomaki for months and seen the great efforts of volunteers in many places throughout the city, it was a huge surprise to see the pool – which had been so filled with mud – cleaned in just two days. The majority of the volunteers who participated in this cleanup effort were in Ishinomaki on the short-term programme – showing what can be achieved through teamwork in even a short volunteer stay.

International Disaster Relief Organization (IDRO) of Japan a local, Kyoto-based organization, has maintained a constant presence in the Oshiga and Ogatsu peninsulas ever since the disaster struck. 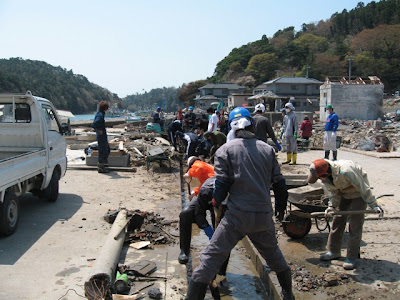 IDRO is looking for volunteers to join them anytime from July 15th to August 30st. In addition to spare hands, IDRO is also looking for donations of the following items which can be dropped off or shipped (IDRO Japan, 817-2 Kannonji Monzen cho, Kamigyo-ku Kyoto 602-8385 JAPAN):

JEN, an NGO specializing in post-conflict assistance, is also recruiting volunteers from all over the world. Visit their blog to hear testimony from their volunteers.

The road to reflection, healing, and rebuilding winds on. We must never forget and keep contributing to the recovery efforts, as what is good for Tohoku-Kanto right now, is good for Japan, is good for us all.