Parents of children living near the Fukushima Dai-ichi nuclear reactor, forced to watch their children go to school each day wearing radiation-measuring dosimeters, are pleading with the Japanese government to instead issue an official evacuation to safe areas in order to ease their fears of possible contamination.

The above YouTube video, which a group of concerned Fukushima citizens have asked to be spread worldwide, gives a glimpse of the agony that several of these parents are experiencing from concern about continuing nuclear radiation emissions from the plant.

We are concerned for the safety of babies, pregnant women and young children who are sensitive to radiation and are currently living in the area where high radiation has been detected.

We respectfully request the following actions to be taken:

1) We strongly request that you evacuate infants, small children and pregnant women who are most easily affected by radiation. They need to be immediately evacuated further than 30km from the Fukushima nuclear power plant No.1.

2) In addition to the 30km radius, we are strongly requesting you evacuate infants, pregnant women and children from any "Hot-spot" located outside the 30km evacuation perimeter where high levels of radiation are detected.

3) The 20km limited radiation caution area around the Fukushima nuclear power plant needs to be drastically broadened. Currently, infants, small children and pregnant women who are easily affected by radiation are still living in the “radiation controlled area” where theyʼve measured an exceeded radiation dosage. These people need to be evacuated further than the 30km area as soon as possible. We request to extend the evacuation area, create a safely designed evacuation route and enact legislation to improve the locations that accept people from evacuation areas.

Government should utilize its political power to work on the area that needs to be evacuated. You have tobroaden and ensure the evacuation route, and also find new places where those people can live. Thank you.

The petition may be accessed and signed online via the Moms & Children Rescue Fukushima website here.

In the absence of official government action, the citizen group Safecast is presently working to provide radiation mapping of the area. During the initial days following the earthquake, tsunami and outbreak of the nuclear crisis, its members collaborated with the members of the Tokyo Hackerspace group in order to fashion their own Geiger counters, which they affixed to the windows of several cars and drove through areas near the Fukushima plant to take radiation measurements that they in turn uploaded onto an online radiation map they themselves had created. The group has also made the Geiger counters available to schools, orphanages, and other facilities in Fukushima prefecture in a move to help begin empowering residents through understanding the levels of radiation in their areas. 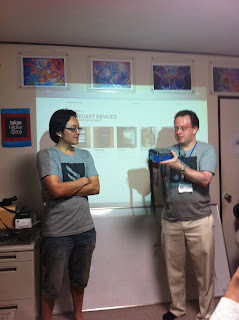 
A video regarding on the Safecast/Tokyo Hackerspace collaboration and their radiation mapping work may be viewed below. (The report, which is in Japanese, starts around the 15 minute mark).


The Safecast blog also include videos about various citizen action projects taking place in Fukushima, as well as information on how to get involved with its volunteer mapping project in Fukushima and beyond.

A gripping open letter (full text of letter edited before publication at The Japan Times) from a concerned father in Fukushima may be read at this TTT post here.