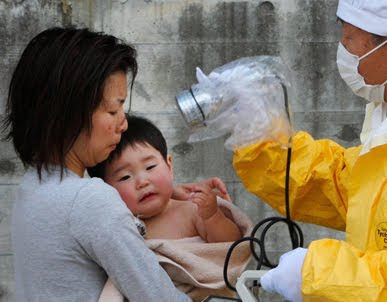 Worried mother holds her son tightly as scientist inspects him
for radiation (Photo: The Japan Times)

Last week, I had a long phone call with a friend living in Miyagi Prefecture whose entire family was forced to evacuate from their newly purchased home near the Fukushima No. 1 nuclear plant. Now, after losing members of his family, and mourning with families who lost children and loved ones to the tsunami, he spends all of his time volunteering in Ishinomaki, one of the cities most devastated by the tsunamis and earthquakes that struck Japan in March.

He told me stories of loss, of hope, and also of disappointment. Thousands of volunteers have really made a difference in helping to move along rebuilding efforts. Yet, health policies have moved along whatsoever. Children in his neighborhood go to school wearing dosimeters, only to be experimented on again by more scientists using even more frightening radiation equipment upon arriving at school. Temporary housing is being built in areas also used for dumping of waste.

Recently this concerned father sent a letter to The Japan Times:


As a father who has evacuated his wife and children from our home near the mess at the Fukushima No. 1 nuclear plant, I would like to share a couple of insights that will hopefully inform the debate, or the lack of one, that has been raging:

* It seems to be very difficult for the administration and the so-called experts who have visited the villages and towns of Fukushima and Miyagi prefectures to reassure us. We don't know [what to believe or what to expect] because nothing like this has ever happened before. Forget about Chernobyl, Hiroshima and Windscale; the timelines, locations, climate, topography, wind patterns and groundwater systems are all different.

* Authorities have not taken systematic readings. Air, water and soil samples have not been taken in areas that matter. We have no benchmark, because samples were not taken before the nuclear plant crisis. The speedy radiation sensor system failed immediately after the March 11 earthquake because of inadequate electricity backup. There are no future projections of radioactive contamination and no model on which to base them.

* That livestock seem to be receiving more attention than children in the region is a disgrace. On March 10, we would not have been able to imagine that our children would be attending contaminated schools wearing dosimeters.

* Internal radioactivity will be passed on to our children's children. Cesium will remain in the environment for 150 years. A parent can't help viewing this threat as the result of unforgivable neglect. It's past time that the authorities admit what they don't know, and act now to move children out of contaminated areas and provide them with a chance at a future.

And let's turn our minds to how to make this evacuation an opportunity for them, rather than wringing our hands over what we should do.

He also made suggestions on how to manage reconstruction funding to prevent it from simply lining the pockets of big business. The Japan Times decided not to publish this part of his letter:


Most of these reconstruction funds (up to 90%) will end up recycled back to the large corporations in Kanto or Kansai - direct repatriation of profits, through building material distribution networks, or simply through money spent in large retailers. There should be a government stipulation attached to all reconstruction funds that there is a limit to the ridiculous levels of subcontracting and that 50%+ of all funds remain in the region.

His recommendations on renewable energy development were also not included:


It is also an opportunity (though it won't be taken) to move away from the ridiculous notion that PV solar power or Wind turbines can or should be a large scale electricity generating substitute for the area. Invest now in proven systems - combined heat and power (CHP)plants, solar water heaters and preheaters for every home -cheap and effective, substituting portland cement production with flyash and lime based materials (40-90% reduction in energy use in a sector using 12-15% of all energy use), establish a committee to design industrial clustering development for the tsunami areas and beyond, where the waste and energy generated by one factory fuels or contributes to the production of the next one. And so on.....

These are the areas of development that need to be enacted, but there is no discussion, little government capacity, no political will and little understanding of what sustainability actually means.

Nor were his prudent suggestion on overcoming energy shortages:


Perhaps it is time to take a long hard look at the energy grid here. Western and Eastern Japan run on different current, 60Hz and 50Hz with just a handful of inverters that connect the two. Thus any surge in demand or heaven forbid a CRISIS might occur then electricity can not be supplied from the other region to compensate.

In a country with a cocktail of natural challenges (earthquakes, heatwaves, heavy snow, volcanoes and typhoons) one would think risk management would be at the fore - not the case. A 'just in time' delivery system in the energy sector doesn't make sense at the best of times.

Japan can learn from this disaster and make wise choices in rebuilding by listening to the voices of the people living through the recovery efforts.

Thank you for posting the entire letter.
Chris