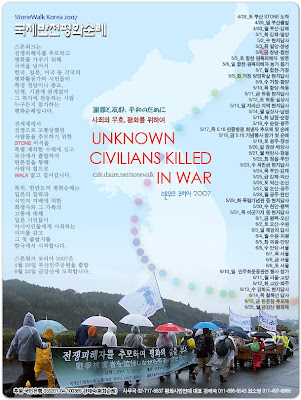 A 2007 grassroots Japanese apology to Koreans and military sexual slavery survivors for the suffering caused by Japan during its military colonial occupation of Korea, the war, and aftermath...(Participants are still engaged in interfaith-based dialogue between Japan, the Korean peninsula, Jeju Island, Okinawa, and the U.S.)...

In the spring of 2007, Japanese peace and reconciliation activists commissioned a memorial stone with the inscription "Unknown Civilians Killed in War" written in English, and, below this, "In Apology, Friendship,and Peace" written in Japanese and Korean. Joining together with Korean and American counterparts, they formed STONEWALK KOREA 2007 for a journey throughout the Korean peninsula. Pushing the one-ton stone in a cart in procession, they began in Pusan at the end of April and arrived in Panmunjeom, next to the DMZ, in June.

Their intention: to apologize to all Koreans for the Japanese occupation of Korea, with a special message for the aging survivors of Japanese imperial military sexual slavery.

Participants recorded their multilingual mission at Korean blog and a Japanese website. Others captured the walk on videos posted on YouTube: "The Start," and "Departure from Seoul."

American participant Dot Walsh noted some of the journey's stops:

• The jail where people protested the imprisonment of Lee Si-Woo who was released in January 2008. The photojournalist and peace activist was charged and detained by the South Korean government in April 2007, for disclosing include reports on anti-personnel mines clearance and landmine casualties in South Korea. Lee had examined these records for the Korean Campaign to Ban Landmines, obtaining explicit permission


The most memorable thing for me was to see and talk to Hibakusha in Hapcheon. We as Japanese didn't know what to say to them. I can't even speak Korean. If they had not been brought to Japan, they would never have become Hibakusha (survivors of the atomic bombings). But, Mr. Hirose spoke to them in Japanese and many of the Hibakusha spoke fluent Japanese and they seemed to enjoy talking to Mr. Hirose as they are from the same generation, and share the same burden that they have carried for a long time.

The Korean victims of atomic bombings have not received widespread English-language media attention, despite the fact that ten percent casualties of the atomic bombings of Hiroshima and Nagasaki were Koreans. According to Korean victim advocates quoted in Andreas Hippin's 2005 article in The Japan Times,""The end of silence: Korea's Hiroshima Korean A-bomb victims seek redress," more than seventy percent of the Korean victims in Hiroshima and Nagasaki came from Hapcheon. Most were brought to Japan by its wartime military regime as forced laborers. Others were desperate, landless farmers deprived of livelihood who went to Japan in seek of employment. Around 23,000 hibakusha returned to Korea after the war, where they faced incredible hardships.

Fukuoka resident Tomoko Ueki described how a trial Stonewalk Korea began in Fukuoka prefecture at the Iizuka Cemetery memorial for unknown Koreans who died as forced laborers in coal mines during the Second World War.

American participant Andrea LeBlanc, a member of September Eleventh Families for Peaceful Tomorrows, a peace advocacy group composed of families of September 11, 2001 victims, participated in both Stonewalk Korea 2007 and the 2005 Hiroshima to Nagasaki Stonewalk. At the end of this journey commemorating civilians killed in Japan during the Second World War, some of the Japanese participants conceived the idea for Stonewalk Korea 2007.

Now it’s in Hapcheon, located in Gyeonsangnam-do, in the southeast part of the Korean Peninsula. At first, Korean Stonewalkers were thinking of putting the Stone near the DMZ. But they found it very difficult to negotiate with authorities. Hapcheon is known as “Hiroshima in Korea” because many Korean Hibakusha (A-bomb victims) live in Hapcheon. So, Korean Stonewalkers are hoping to create a peace park and museum in Hapcheon in the future and put the memorial stone in the park.

Ogata described the grieving activities that Korean and Japanese Stonewalkers in Okinawa from February 15-18, 2008, and Jeju Island, off the southern coast of South Korea from March 28 to April 3, 2008:

Each island has a similar sad history of war and today’s problem of military bases. Through the fieldwork, we’ll mourn unknown victims and step forward to peace together. Although we are not pulling a stone, we think it’s a peace pilgrimage, following the Stonewalk Korea 2007. Of course, participants from the U.S. are welcomed!

He added that details will be posted (in Korean) at the Korean Stonewalk website.

Peace Abbey a spiritual retreat in Sherborn, Massachusetts, just outside of Boston, purchased a one-ton granite memorial stone and inscribed on it the words “Unknown Civilians Killed In War" to honor all people killed in war. Mohammed Ali, a renowned war objector, unveiled the stone in 1994.

For centuries, countries have honored soldiers who have died in battle. The U.K. buried an "unknown warrior" from the First World War in 1920. Other nations followed suit, putting iconic spotlights on tombs of "unknown soldiers." However, national governments have paid little to the civilian loss of life in wars. Some experts say that in modern warfare, governments often intentionally overlook civilian deaths ("collateral damage") as not meriting close accounting.

Nine out of ten casualties of war are innocent civilians, according to the Peace Abbey leadership, which became concerned about the lack of an official place in the U.S. where citizens can mourn civilian victims of war: men, women and children. Dot Walsh, the Peace Abbey program director, explained, "The idea for Stonewalk was first suggested by a Cambodian Buddhist monk, Maha Ghosananda. He said, 'They don't have a memorial in Washington honoring civilians. Why don't you bring the one here (the Memorial Stone) at the Peace Abbey there?'"

To fill this vacumn, Peace Abbey created another memorial stone and transported it to Washington, D.C. in 1999, hoping it would be placed in Arlington Cemetery, home of the Tomb of the Unknown Soldier. However, the U.S. Congress refused to accept the stone. Thereafter, Peace Abbey decided to send it around the world to draw attention to civilians killed in war, and as a focal point for peace and reconciliation, supported by the interfaith peace activism of Peace Abbey. Stonewalks have taken place in Ireland in 2000 and England in 2001, and the U.S. in 2004.

One of the Korean ministers who participated in Stonewalk Korea 2007 expressed hope that Japanese, Korean, and American people will join with Vietnamese people and initiate a future Stonewalk in Vietnam.