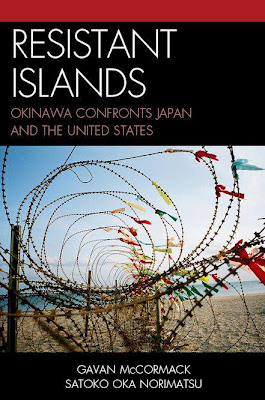 Please allow me to announce the publication of my book with Gavan McCormack: Resistant Islands: Okinawa Confronts Japan and the United States, by Rowman and Littlefield, July 30, 2012.

I hope this book will be useful for our cause of bringing justice to Okinawa.

Resistant Islands offers a comprehensive overview of Okinawan history over half a millennium from the Ryukyu Kingdom to the present, focusing especially on the colonization by Japan, the islands' disastrous fate during World War II, and their subsequent and continuing subordination to US military purpose.

Adopting a people-centered, view of Japan’s post Cold War history and the US-Japan relationship, the authors focus on the fifteen-year Okinawan struggle to secure the return of Futenma Marine Corps Air Station, situated in the middle of a bustling residential area, from US to Okinawan control. They also highlight the Okinawan resistance to the US and Japanese governments’ plan to build a substitute new base at Henoko, on the environmentally sensitive northeastern shore of Okinawa. Forty years after Okinawa's belated "return" to Japan from direct US rule, its people reject the ongoing military role assigned their islands, under which they are required to continue to attach priority to US strategy.

In a persistent and deepening resistance without precedent in Japan's modern history, a peripheral and oppressed region stands up against the central government and its global superpower ally. One recent prime minister who tried to meet key Okinawan demands was brought down by bureaucratic and political pressure from Tokyo and Washington. His successors struggle in vain to find a formula that will allow them to meet US demands but also assuage Okinawan anger. Okinawa becomes a beacon of citizen democracy as its struggles raise key issues about popular sovereignty, democracy and human rights, and the future of Japan and the Asia-Pacific."

Okinawa becomes a beacon of citizen democracy as its struggles raise key issues about popular sovereignty, democracy and human rights, and the future of Japan and the Asia-Pacific.

Resistant Islands is a tour de force—not only a stunning introduction to the resilience and vision of the people of Okinawa but also a devastating critique of official Tokyo’s obsequiousness to dictates emanating from Washington.