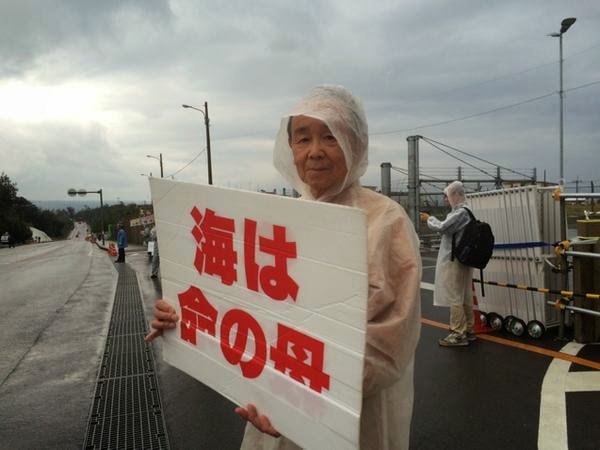 Sign: The Sea is the Mother of our Heart.
Photo of Mr. Yonezawa at Henoko via Sunshine Miyagi on Twitter.

Hiroshima nuclear bomb survivor, Mr. Tetsushi Yonezawa, stands with Okinawans, in call to save the coral reef and dugong habitat at Henoko, Okinawa's most important natural cultural heritage site, from US-Japanese government  destruction. The ecoregion is home to the critically endangered Okinawa dugong, a natural monument and beloved cultural icon, and Okinawa's only fully intact and best coral reef.  The area is a living manifestation of the most important Okinawan values: Nuchi du Takara, the right to life, including the right to life of nature.

Mr. Yonezawa witnessed the nuclear bomb hitting Hiroshima from a streetcar when he was 11-years-old.  He wrote a book about his experience after the Fukushima multiple meltdowns spoke to his conscience about the need to publicly witness for a peaceful, nuclear-free world.


"Something flashed somewhere with a strong blinding light. Spontaneously, I closed my eyes. Then, I heard a tremendous sound that was the most terrible sound I have ever heard. It was like a hundred thunderclaps crashing all at once just a short distance away."

...As the streetcar approached the front of the Fukuya department store at the center of downtown, the A-bomb exploded. They were then about 750 meters (0.5 mile) from the hypocenter. It is said that the bomb blast that hit them had a wind velocity of some 220 meters (720 feet) per second. The windows of the streetcar all broke at once and the streetcar filled with screams.