New Face of Empire v. the Anti-War Committee of 1000: No base in Henoko, Okinawa! NO WAR 4.26 Shibuya Sound Parade & 4.27 "Protect the Peace Constitution" Action

The Anti-War Committee of 1000 (co-founded last year by Nobel Prize Laureate Kenzaburo Oe, former Okinawa Gov. Masahide Ota,and other Japanese and Okinawan social and cultural leaders) brought the ubiquitous pink Okinawa Dugong balloon to Tokyo's Shibuya district on Sunday for the No base in Henoko, Okinawa! NO WAR 4.26 Shibuya sound parade. About 1000 people attended the "NO WAR in Shibuya! Solidarity in the struggle for Okinawa" rally, which overlapped with the Rainbow Pride parade. 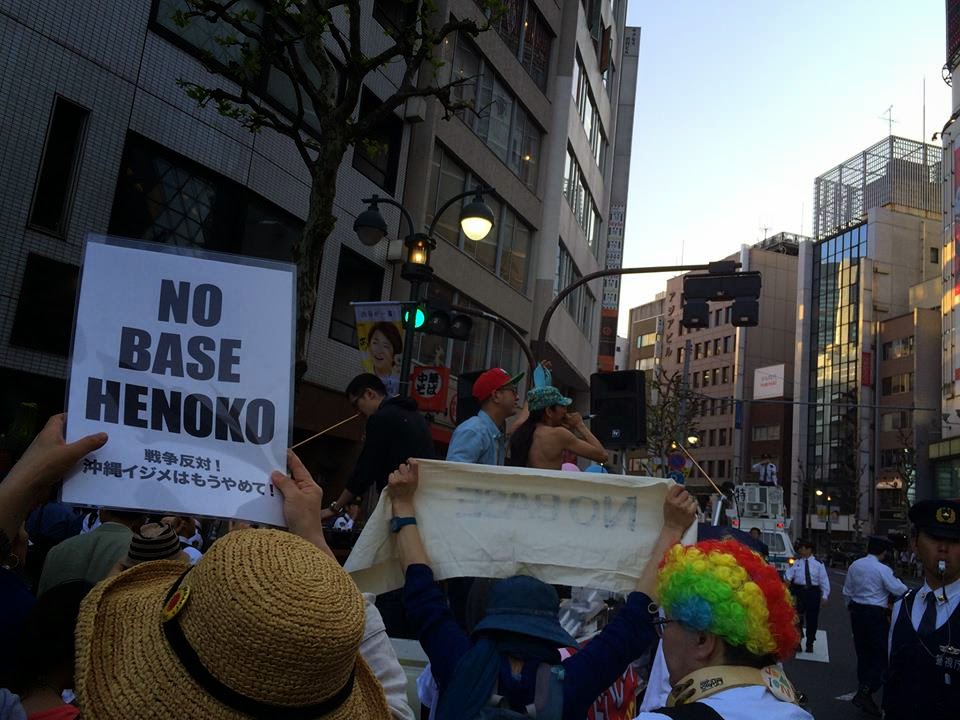 This is one of the many ongoing  protests in mainland Japan and Okinawa, opposing the Abe administration goal of reviving the Japanese wartime military order under US hegemony. Many onlookers see in the domestic struggle as a replay of the prewar Japanese political contest between pacifists and militarists.  And as a replay of the massive protests against the 1960 US-Japan Security Treaty (ANPO) forced through the Japanese Diet by PM Abe's grandfather, Nobusuke Kishi. The main point of opposition was that it would allow U.S. military bases to remain on Japanese and Okinawan soil. 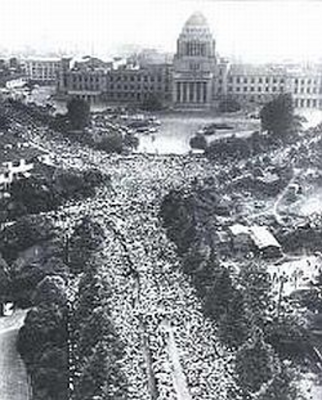 Hundreds of thousands protested passing of the
Treaty of Mutual Cooperation and Security between the US andJapan (ANPO)
that PM Nobusuke Kishi, grandfather of PM Abe, forced through
the Japanese Diet on May 20, 1960, at the sacrifice of his political career.

On Monday, the Anti-War Committee of 1000 held another rally at the PM's residence to protest the Abe administration's revision of US-Japan military guidelines which call for the increased integration of the US and Japanese militaries. Approximately 800 people participated in the 4.27 action.


...fundamentally a cost-conscious policy, aimed at maintaining a major U.S. role in Asia at less cost in both dollars and American lives. This combination has been given the policy a racist cast perhaps best illustrated by Ambassador Ellsworth Bunker's comment that [this] means changing 'the color of the corpses...

While the primary thrust of the Doctrine is military and budgetary, this thrust interlocks with important considerations concerning the future economic development of Asia... 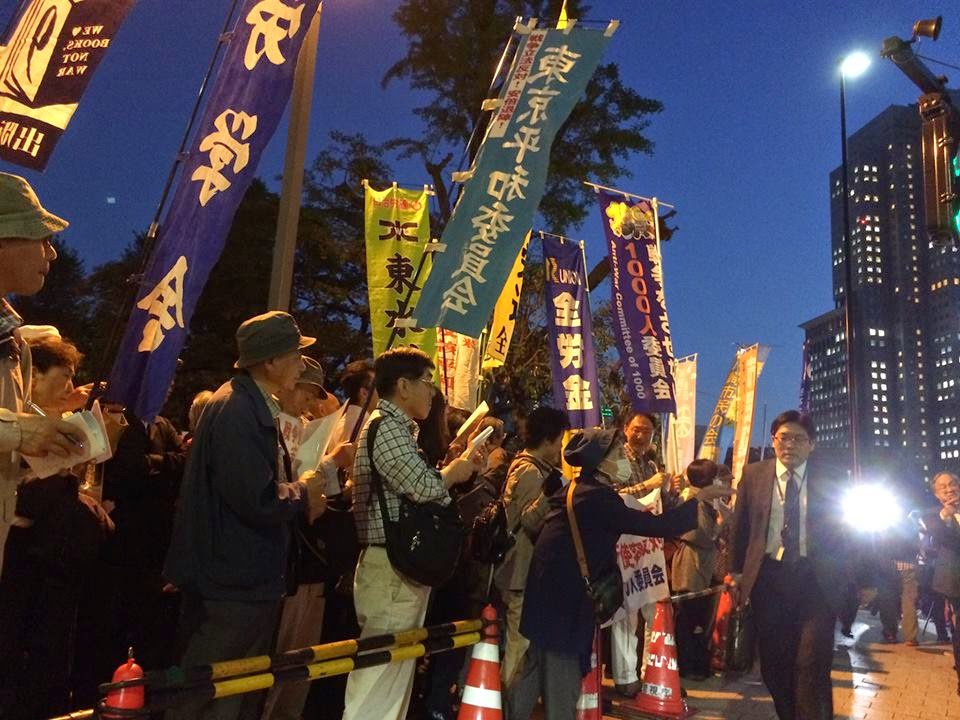 Dower added that the US military and economic globalization strategy may be traced back to the Truman era:


...represents ittle more than the new face of American empire. It applies cosmetics to the scarred strategies of the past; here and there, where the old features of imperium have become particularly battered, there is even a bit of strategic plastic surgery. At this stage in history, after..decades of often tragic American policy in Asia, one looks for new questions, sensibilities, and committments which strike to the root of affairs...Upon close examination, it is fundamentally not even a new policy, but rather a pastiche of rhetoric and programs familiar since the early years of the cold war

(I)...containment remains the framework of miiltary strategy...and the U.S has reaffirmed its commitment to counterrevolution.

(II)The network of American bases and manpower commitments abroad is being rationalized and restructured, not reconsidered.

(III) Client armies are being developed to replace American combat troops in crusades largely defined by Washington and at costs to both Asia and the U.S. which are as yet incalculable...

(V) The possibility of the United States initiating nuclear wr in Asia has been immeasurably increased.

(VI) Economic policies remain structured in such a way that many Asian countries face  the prospect of becoming locked into permanent dependency as the neocolonies of the US... 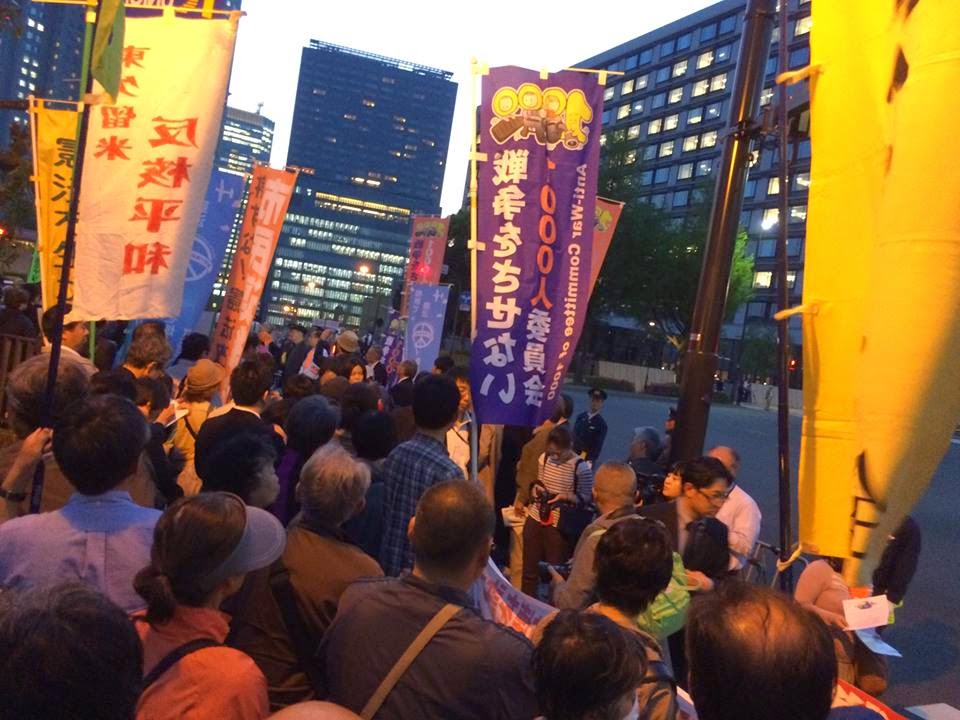 The guidelines for Japan-U.S. defense cooperation have been revised for the first time in 18 years.

The new guidelines, which confirm the direction of the security policies of the Japanese and the U.S. governments, call for “seamless” and “global” security cooperation between the two countries. They will accelerate the “integration” of the Self-Defense Forces with U.S. forces...

Underlying the revision is the Abe administration’s policy initiative to change the government’s traditional interpretation of the Constitution to allow Japan to exercise its right to collective self-defense. This radical shift in security policy was formally endorsed by the Cabinet’s resolution in July last year.

Proposed security legislation in line with the Cabinet decision is the focus of the current Diet session. Although the Diet has yet to start debating the legislation, the new guidelines already reflect the Cabinet decision to make it possible for Japan to use its right to collective self-defense. They also include the SDF’s overseas minesweeping operations, an issue over which the ruling Liberal Democratic Party and its junior coalition partner, Komeito, are at odds...

Dated Feb. 25, the statement read: “Seventy years after the war, memory of it is fading along with memories of Japanese colonial rule and aggression with its accompanying crimes against humanity. Now, there are calls to rewrite the history of that time, denying what really happened.

“The present government is attempting to enact laws to protect state secrets, allow for the right of collective self-defense and change Article 9 of the Constitution to allow the use of military force overseas.”

Kazuo Koda, a bishop from the archdiocese of Tokyo who was involved in drafting the document, said he and other priests were initially reluctant to argue specific policy measures. “But we became convinced that we must speak out with clarity that these are wrong,” he said.

Nobel-winning novelist Kenzaburo Oe has stressed that he and others are ready and willing to carry the torch lit by the late constitutional scholar Yasuhiro Okudaira, a leading supporter of the war-renouncing Article 9 of the Constitution.

Oe was one of six people who addressed a rally April 3 on the legacy of Okudaira, a professor emeritus at the University of Tokyo who died in January at age 85. About 900 intellectuals and activists attended the gathering in Chofu, Tokyo.

The writer said Okudaira believed that Article 9, the clause that outlaws war, has played a major role in molding the character of Japanese who grew up in the postwar period.