Okinawa Gov. Onaga: "Okinawa has never voluntarily provided bases. Futenma, & all other bases, were taken with 'Bayonets and Bulldozers' while Okinawans were in concentration camps during & after the war." 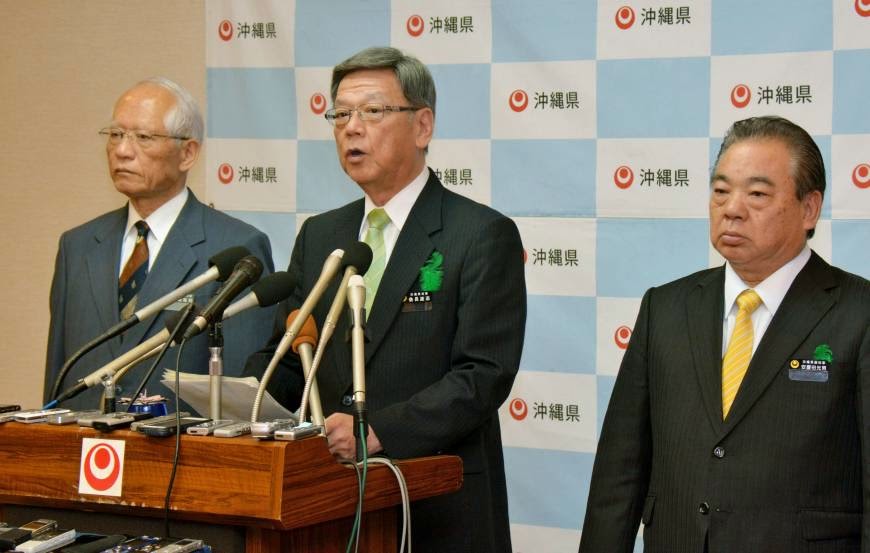 On March 23, Okinawa Gov. Takeshi Onaga demands that the Japanese government
stop landfill preparation at the natural cultural heritage site at Henoko
so that the prefectural government can assess damage to Okinawa's only fully intact coral reef,
and habitat of the critically endangered Okinawa dugong, a protected natural monument.
(Photo: Japan Times via Kyodo)


As you [Chief Cabinet Secretary Suga] said, Okinawa, which comprises 0.6% of Japanese terrirtory, has been burdened with 74% of US bases in Jp. Okinawa has supported the Ampo(US-Jp Security Treaty) system for 70 years after the war, with mixed emotions, both pride and pain at the same time.

With my political background, I fully understand the importance of Japan-US Ampo. You talk about the Senkakus, but unless the whole nation is ready to take the burden of Ampo, what would this kind of national defense (one in which Okinawa is overburdened) look like from the eyes of other nations? Japan's security, Ampo, & the Jp-US military alliance must be done as the people of Japan as a whole (not just Okinawa).

You said you might move [V-22 transport aircraft] Osprey to the mainland, but without any of the major bases relocating to the mainland, our overburden may not change. That's been the case in the last 70 years.

And no matter how much we express what we need, Okinawa's concerns won't be taken care of within the existing SOFA (Status of Forces Agreement).  SOFA must be fundamentally revised.

I want to stress that Okinawa has never voluntarily provided bases. Futenma, and all other bases, were taken with "Bayonets and Bulldozers" while Okinawans were in concentration camps during and after the war.

.... two years ago, the day when the [1952] San Francisco Peace Treaty came into effect was celebrated. It was a celebration of Japan's regaining independence. But it was the day when Okinawa was detached from Japan. It was a sad day for us. When we heard "Banzai!" at the ceremony, I thought, "Are they even thinking about Okinawa?"

During those 27 years under US military occupation, when Japan enjoyed economic prosperity, we were struggling to gain autonomous rights during. The hardship was beyond anyone's imagination.

You and I both went to Hosei University. But until I was 22-years-old, I used my [USCAR (US Civil Administration of the Ryukyu Islands) "Resident of the Ryukyus"] passport, and had money sent in US dollars. When I look back, I wonder, "What was Okinawa really supporting during those 27 years?

You always use the word "shukushuku to" (solemnly).  It means you are just going ahead with the Henoko base construction and we have no say. Such attitude reminds me of Lt. Gen Paul W. Caraway, US High Commissioner in the old time. He said there was no such thing as autonomy for Okinawa. Whenever you use the word "shukushuku', it reminds me of Caraway, and makes me wonder what did those 70 years (after the war) mean for us?

Then the guy called Price came, and with what was called "Price Recommendation," US tried to buy out land from Okinawans [with one-time] lump sum payments [for tens of thousands of acres private property the US military forcibly seized from 230,000 Okinawans from WWII through the 1950's]. We were all poor then, and desperately wanted the money, but rejected the offer.

Now, the land [albeit leased to the Jp and US govts] is ours. In light of such history of our struggle, no such word as "shukushuku" can threaten us. The more you use such condescending words, the more the minds of Okinawan people are turned away, and the angrier they become. I absolutely believe that it is impossible to build the Henoko base.

It is the power of the Okinawan people... our pride, our confidence, and our thoughts for our children and grandchildren, coming together. It is impossible to build the base. And the Japanese government bears the entire responsibility for any costs associated with cancellation of this base. The world is watching this test of Japanese democracy.

Let me ask you. Both you and Rumsfeld think Futenma was the "most dangerous base in the world." You try to brainwash Okinawans and the people of all of Japan, telling them that "in order to remove Futenma's danger, Henoko is the only way." Is it? Will Futenma stay permanently if the Henoko plan falters?

You talk about the base reduction, but after all these bases are returned, what will be the base burden ratio for Okinawa? It will only reduce from 73.8% to 73.1%. Why? Because all these bases will be relocated WITHIN the prefecture, including Naha military port and Camp Kinser. Your talk of base reduction may sound convincing, but if you really look at the numbers, this is what it is about (from 73.8% to 73.1% only).

And you say you will return Naha military port by 2025, and Camp Kinser by 2028. Then what? It (the agreement) says the rest will be returned "later." What kind of Japanese language is that? You give a sweet talk to get through the day, but then quickly you forget about it. It has been our experience of the past 70 years. This is why, even when you talk about moving Osprey to this place and that place, we are in doubt, thinking that maybe it will take another 50 years.

Prime Minister Abe keeps saying he will, "take Japan back." Does that "Japan" include Okinawa?

Now, the economy. When 9/11 happened, Okinawa lost 40% of its tourists. The damage was significant. Senkaku, I understand them as Japan's inherent territory. Once something happens there, I can see the million tourists to Ishigaki going down to 10% of the current number.

Okinawa's soft-power can be utilized when its peace is secured. With US bases, considering the advancement of the missile technology, one or two misses will destroy Okinawa. I suspect US and its military want to withdraw from Okinawa, and only Japan wants to keep them there for "deterrence."

I would like to meet with Prime Minister Abe too. You are a minister in charge of reducing Okinawa's base burden. I want you to cancel the Henoko plan, have proper dialogues, and resolve the base issue.