Aaron Huey: "The Most Beautiful Thing I've Seen in Kabul" 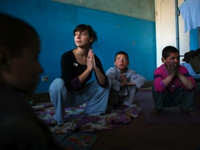 In "The Most Beautiful Thing I've Seen in Kabul" by American photojournalist Aaron Huey, published in 2008 in the Shambala Sun—with photographs of orphaned boys practicing yoga with a young American woman—reminds us that the innocent are always hurt in war:


In the spring of last year I drove through Kabul, Afghanistan, past rows of mortar-scarred buildings, down the Darulaman Road, a former front line in the mujahedeen war, toward the Allahoddin Orphanage. Next to me in the car was the reason for my journey: a young yoga teacher named Molly Howitt. What Molly showed me that day was the most beautiful thing I have ever seen in Afghanistan. From the top tier of a bunk bed, in one of the largest and most corrupt government orphanages in Kabul, I saw a scene through the viewfinder of my camera unlike any other in that war-torn country.

Below me was a floor covered with bodies. Not dead, or dying, or starving, but perfectly at peace, calm, and present. A dozen young boys between the ages of eight and twelve were lying on their backs, arms at their sides, with palms facing upward. Some were smiling; others just lay still, their minds turned inward. Before that day, through that same viewfinder, I had seen a very different set of images.

I lived in Kabul for five months of 2007, photographing the opium and heroin trade, AIDS, prisons, mercenaries, the aftermath of a massacre of civilians by U.S. Marines, a Taliban ambush with a high number of fatalities (which nearly included myself), and several other subjects that involved terrible loss or suffering. In Molly’s yoga class I saw something different. I saw healing, I saw compassion, and I saw hope—hope that is desperately needed in a country that is increasingly unstable and violent...

The country, which has been in a continual state of conflict for twenty-nine years, is still very much at war. And as is always the case in war, women and children bear the greatest burden.

Most of the children in the Allahoddin Orphanage have lost a father or mother to war or illness. When children enter an orphanage in Afghanistan, they find themselves in a world that is cold and violent, neglectful and punishing—a world in which they are used as props to lure in foreign donations, then literally locked up again once the money is guaranteed...

Today, the remnants of Afghanistan’s ancient Buddhist history are almost all gone, but the yoga of compassion can still be found in the shadows of this war-torn country. It survives in a way more powerful than the physical beauty of the grand facades destroyed at Bamiyan, and more valuable than any Buddhist statue destroyed in the Kabul museum. Compassion is alive and well in a cold, crowded, forgotten orphanage in Kabul. It is alive in the hearts and minds of a dozen children who lay still with eyes closed, palms outstretched, and smiles creeping across their faces.

Huey's moving photos and text have been republished at the Utne Reader.

(The name of the NGO working directly with the disadvantaged people of Afghanistan that Molly Howitt was working with is PARSA.)