"It's You" - a poem by Misato Hamamura

The following poem was written by Misato Hamamura, a freshman in Tokyo Keizai University's 21st Century Liberal Education Program who is in my English Presentation course. She was inspired to write this piece after visiting Nepal as part of her university’s off-campus international program this summer.

While stark in imagery, her poem gives great hope regarding the power of individuals to reach into their own hearts and create a better world. She presented the poem in class earlier this month, which happened to be her 19th birthday.

No one was putting their theories into action.

The earth is a factory.
This factory manufactures a great number of futures.
Someone said, “This is the birthday of our good fortune.”
Someone said, “Stars are twinkling in the sky.”
Someone cried, “Happiness!”

My hope is you.
It’s you.
Following the reading of her poem, Misato facilitated an engaged discussion among class members on the connections between materialism and a loss of soul, and how people in Japan might learn from those in more spiritual-based countries such as Nepal.

Misato (who is pictured below to the far right, at a World March for Peace and Nonviolence event recently held in Tokyo) is presently studying how the issue of poverty serves as the underlying cause of other social problems. She would like to visit the United States, where she hopes to see anti-poverty initiatives in action. She is also studying Korean, and plans to visit Korea in order to promote positive ties between Korean and Japanese youth.

She is one hope-inspiring example of the many young people around the world who are engaged in positive social change, and her poem is a thoughtful call to action for each one of us. 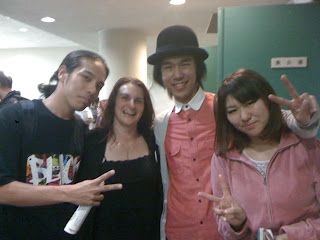