"A lot of people with similar motivations to better the world all congregated in one place. I wish it would happen more often!" 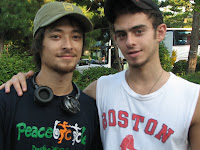 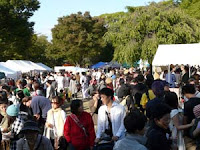 What is Sam Dreskin (pictured left) referring to?


vegetarian-, environment-, and peace-minded people from all over the country. An event for all ages, the festival gives you a place to enjoy vegetarian food and listen to music while learning about vegetarianism, the environment, and more. The Vegetarian Festival provides a place for people of all ages and nationalities to learn about a healthy lifestyle, while bringing attention to problems like the degrading environment and World Hunger.

With the governments of the world waking-up to the realities of global warming and climate change, this year's festival focused on the following themes:


★Living a healthy life, both mentally and physically
★Respecting life, not just of humans, but of the animals with which we cohabit the world
★Realizing how pollution and food over-consumption can degrade the environment
★Introducing organic retailers throughout Kyoto
★Providing a place to learn from NPOs

Over 80 different organizations, earth-friendly goods suppliers, and NPOs converged together sharing the multitude of ways in which we can fulfill the festival's ideals. Local vegetarian cuisine, including Deep Kyoto favorites like Sunny Place, Falafel Garden, Mikoan, Caffe dell' Orso and Cafe Millet were cooking up a storm while masseuses from Malinka soothed our souls with their dexterous hands. 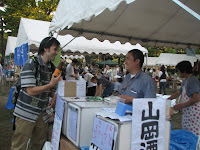 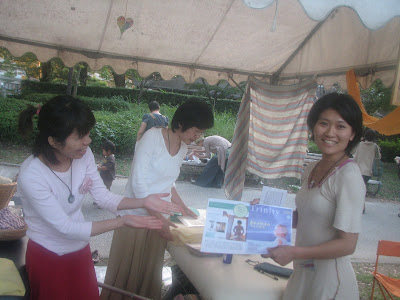 NPOs such as Make the Rule/Kiko Network informed the public of the need for Japan to move beyond the Kyoto Protocol and make even more drastic cuts in greenhouse gas (GHG) emissions in order to prevent further global warming. 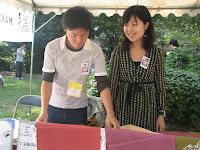 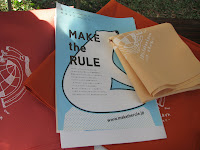 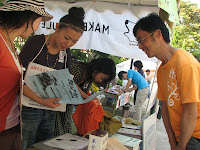 Seven activists from the Make the Rule/Kiko Network team are in Copenhagen at the Climate Conference advocating that Japan make a law to reduce greenhouse emissions. One of the members, Mutsumi Hirooka (廣岡睦) explained while folding a furoshiki:

"Although Japan is obligated by the Kyoto Protocol to reduce greenhouse emissions by 6% against 1990 levels by 2007, emissions had actually increased by 8.7% . While government officials misleadingly brag about meeting the Kyoto Protocol goal in 2009 by reducing emissions by 6% in one year, the accumulative effect of the increase in GHG in the atmosphere is not taken into consideration, meaning the emissions are now 15% higher than the original target. At present, Prime Minister Hatoyama is pledging to reduce emissions in Japan by 80% by 2050, on the condition that other countries make the same pledge to reduce emissions, increasing his campaign pledge for emission cuts by 65%. The highest Former Prime Minister Aso would commit to was 8%."

While the festival has come and gone, the Vegetarian Festival 2009 website provides a wealth of information for those interested in pursuing a lifestyle sustainable to the environment in both English and Japanese. The meat industry wreaks havoc on the environment, with 18% of greenhouse gases originating in the livestock industry. When one beef rice bowl requires over 2 tons of water to produce, versus 120 liters for a bowl of udon, the benefits to the earth of reducing meat consumption are quite obvious.

As Sam noted, in front of the Falafel Garden vendor, after enjoying an cruelty-free pita: "It is important that we see this as part of a daily lifestyle instead of a one day thing. The vegetarian festival inspires us to make the change by showing how easy, delicious, and full of love a vegetarian lifestyle can be."

What's more, the vegan festival is not only for vegans alone. Takayuki Okazaki (岡崎享恭）, a lecturer at Kyoto Sangyo University, explained that although he did eat meat, he was happy to have the opportunity to learn about different kinds of foods made out of non-animal products so that he could introduce them into his diet.

In addition to reducing our consumption of animal products, walking is much kinder to the earth than riding around in gas guzzling automobiles. This weekend, walk a little more in solidarity with the "Cool Earth! Kyoto Action 2009” Parade. The Parade will send a message from citizens in the Kansai Area to the Climate Conference in Copenhagen taking place December 7th – 18th. 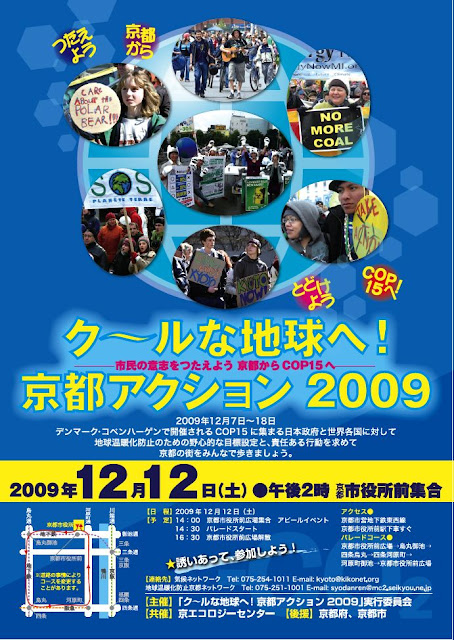 
Dress colorfully, bring instruments, carry a placard you made, or just
bring yourself.

Join any part of the parade. Come with fun costumes, placards, musical
instruments, or just bring yourself.


Kyoto City Hall access:
Tozai Line (Kyoto municipal subway line)
Get off at: “Kyoto-shiyakusho-mae”, and you are there.